Common teasel (Dipsacus follonum) and cut-leaved teasel (D. laciniatus) are closely related, herbaceous biennials or short-lived perennials that were introduced to North America in the 1700s. Both are currently found in Missouri.

Teasels grow in open, sunny habitats in wet to dry conditions. These plants are most commonly found in disturbed areas, including roadsides, railroads, and sandbars in streams. Teasel populations have flourished in the last 20 years due to late summer mowing along Missouri’s highways.

Teasels are aggressive exotic species that have the capacity to take over prairies, savannas, and glades if allowed to become established. Lack of natural enemies allows teasel to proliferate. If left unchecked, teasel can quickly form large monocultures excluding all native vegetation. Cut-leaved teasel has been observed to invade natural communities more aggressively than common teasel. 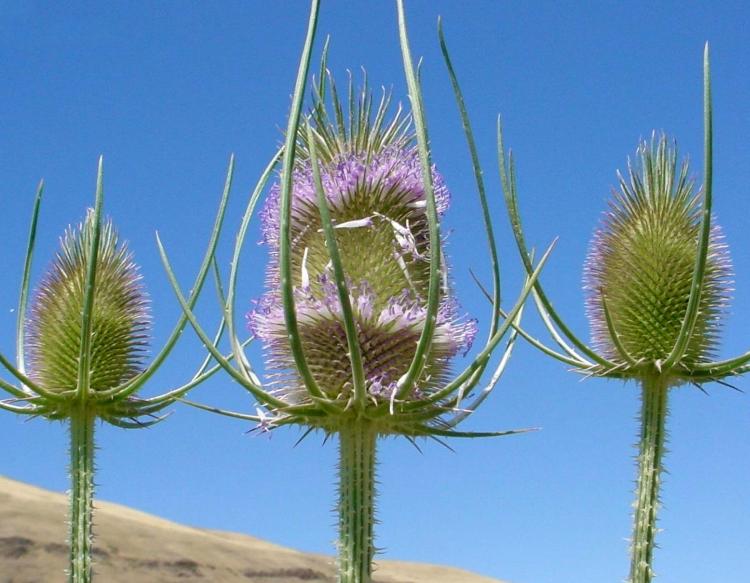 Digging Up or Pulling the Plants

For small populations mechanical methods work quite well. Young rosettes can be dug up using a dandelion digger. Just as in digging up dandelions, as much of the teasel root needs to be dug up as possible. Once the rosettes get large, it is difficult to dig the roots up without doing damage to the natural area around the plant. Very small seedlings can be pulled up by hand when the soil is moist.

Flowering plants can be cut before seed set. At the initiation of flowering, the flowering heads should be cut off and removed from the natural area. Removed immature seed heads left in place can still develop some viable seeds.

Probably the most cost effective method of control is the use of foliar applied herbicides. Any of the herbicides recommended below for buffer or disturbed sites can be used, but with greater care to prevent damaging native plants. Spot treatment with backpack sprayers is probably the preferred method in high quality areas as opposed to high volume units.

Prescribed burning (as described in next section) in conjunction with herbicide treatment is probably the best strategy to insure complete coverage.

The most cost effective control method for heavily infested sites is the use of foliar applied herbicides. Glyphosate (under trade name Roundup), 2,4-D amine (under various trade names), and Triclopyr (under trade name of Garlon 3A) have all been used successfully.

Triclopyr and 2,4-D amine are dicot specific. (Dicots are flowering plants that have a tap root and netted veins in their leaves.) These herbicides should not harm monocots (flowering plants with parallel veins and spreading roots, such as grasses). Both herbicides should be applied during the growing season, preferably before the plant has bolted (sent up a flowering stalk). Triclopyr appears to be slightly better at controlling teasel than 2,4-D amine.

Application can be made after bolting, but there is a risk of the seeds still developing, depending upon the date of application. Neither of these herbicides have been tried during the dormant season, but they may be effective. The rosettes of teasel stay green late into fall or even into winter when most other plants have died back. Application at this time would allow treatment without harming other dicots.

Glyphosate will kill any green plant. To avoid killing monocots, glyphosate should be used sparingly during the growing season. If harming other plants in the immediate vicinity is not a problem, glyphosate is quite effective.

Glyphosate should be applied before the plant bolts. Glyphosate can also be applied after bolting, but again there is a risk of the seeds still maturing. Glyphosate can also be applied during the dormant season. The results of dormant season treatment are mixed, some individuals have reported success and others failures. The condition of the rosettes and daytime temperature are probably important factors. Rosettes in good condition on warm days are probably photosynthesizing and glyphosate would be effective. Stressed plants and plants on very cold days may not be photosynthesizing and glyphosate may not be effective under these conditions. More research is needed on the use of glyphosate during the dormant season.

These herbicides can be used as a spot treatment method with a backpack sprayer. A 1.5- to 2-percent solution of glyphosate is effective (Note: some products containing glyphosate or another herbicide may be pre-diluted, so be sure to read product labels to understand herbicide concentration levels).

A 2-percent solution of Triclopyr has proven successful. Triclopyr needs the addition of an agricultural non-ionic surfactant (a wetting agent that increases herbicide coverage on a plant). Herbicide coverage should be thorough to wet all the leaves and stems.

Use of high volume equipment (booms, etc.) may be possible in highly disturbed areas where there is little likelihood of damaging wanted vegetation. By law, herbicides may only be applied according to label directions.

Prescribed burns may make detection of teasel rosettes easier. Small rosettes can be hidden in the litter, while dried grass and forb stems can make complete spray coverage with a herbicide difficult.

Either fall or spring burns would open up the area for detection. Fall burns would allow detection of rosettes during the dormant season. There is some evidence that singed rosettes may not be as active during the dormant season, and not as susceptible to herbicides. Fires will not carry well through dense stands of rosettes, so singed rosettes may only be a problem around the periphery of an infestation, or with isolated plants.

Prescribed burning alone has not proved effective. It should be used in conjunction with other practices.

Several years treatment may be necessary to totally eradicate teasel from a natural community. It is important to prevent all seed production so that there is no addition to the seed bank in the soil. It may take several years (even up to five or six years) of repeated treatment before the seed bank is depleted. It is useful to map locations of infestations and treatment so that they can be readily located in future years.

If treated in the early stages of infestation it is possible to cheaply and quickly control teasel. If teasel is noticed outside, but near a natural community, get control of the teasel before it gets into the natural community. As with all exotics, start control before they become a serious problem.

Mowing is ineffective because the root crown will re-sprout and flower after being cut. Even repeated mowing is ineffective. Repeated mowing will stop some plants from flowering, but others will produce short flowering stems that may be short enough to be below the height of the mower. Plants that have been knocked over by a mower and not cut off will lie horizontally and produce short flowering stalks below the height of the mower.

Cutting Flower Stalks When Plants are in Flower

Prescribed Burning as Only Control Method

Prescribed burning alone is ineffective. Prescribed burning may kill some of the isolated small seedlings, but is ineffective against dense seedlings or large rosettes. Many seedlings germinate around the parent plant where shade from the parent plant has created a bare soil area. Fire will not carry through these bare soil, low fuel areas. Teasel remains green late in the fall and into winter, and also greens up early in the spring. The green teasel plants in areas of large infestations stop the fire from carrying into the interior of the population.

No biological controls are known that are feasible in natural communities.