The forests we enjoy today are very different from the forests of the past two centuries in Missouri. In the 1800s, forests covered 70 percent of Missouri. Explorers wrote of the dark swamps of the Bootheel, the park-like pine forests of the Ozarks, the balds of southwest Missouri, and the mix of prairie and forest in northern and western Missouri.

From 1880 to 1920, the pine forests of the Ozarks attracted lumbermen from the eastern United States, and Missouri became one of the leading lumber-producing states in the nation. Huge sawmills produced building lumber, shingles, molding, and railroad ties for a growing nation. All across Missouri and the United States, forests were generally logged and abandoned in the early 1900s. This practice continued until 1920, when most of the timber had been cut.

1925 — The Missouri Board of Agriculture added a state forester whose primary role was to control wildfires in the state. The first state forester, Frederick Dunlap, resigned in 1931 when the state legislature failed to appropriate any funds for forestry. At the time, it was thought that one-third of the Ozarks burned annually.

1933 — President Franklin D. Roosevelt created the Civilian Conservation Corps. The CCC was formed to provide much-needed employment to young men and to aid in the conservation of the United States' natural resources. The program enrolled some 520,000 men in the U.S. at its peak, and approximately half of those were assigned to forestry projects. The CCC developed more than 800 state parks, planted 3 billion trees, built 3,100 lookout towers, and fought thousands of acres of wildfires.

1936 — Missouri voters approved a state constitutional amendment creating the Conservation Commission. The commission created the Department of Conservation and established a forest management program. George O. White was the first state forester at the department.

1938 — Federal funding made available by the Weeks Act of 1911 was used to purchase land for national forests in Missouri.

1946 — Missouri legislature passed the State Forestry Act that gave commission employees the ability to go on private land to suppress wildfires and provided property tax relief to landowners who enrolled their forest land in the Forest Cropland program.

1937 to Early 1950s — The Forestry Division’s Showboat vehicles, each equipped with a portable generator and a movie projector, visited rural schools throughout the Ozarks showing movies about ﬁre prevention and conservation. During this time, fire towers were the primary means of wildfire detection in the state.

1975 — The Proctor fire tower in Morgan County was the last fire tower added to MDC’s network. Many towers were taken down in the 1980s, and aircraft were used more often for fire detection. By 1970, fire towers only accounted for about 40 percent of detected wildfires throughout the state.

1989 — MDC established the 100-year Missouri Ozark Forest Ecosystem Project (MOFEP) to study the impacts of various forest management practices on the health of not only the forest but also plants and animals.

2020s — Approximately 60 MDC fire towers remain standing from the more than 105 fire towers that once stood in Missouri. About 30 of the remaining towers are still used occasionally for fire detection in the more remote areas of the state, but due to improved communications and other methods of detection, they now account for only a small fraction of the fires detected in Missouri annually.

2020s — MDC continues ongoing action plans to help Missourians care for the state's trees and forests. The department aims to ensure that Missouri's forests are healthy and thriving and will remain that way, providing the state with clean water, clean air, high-quality wildlife habitat, diverse outdoor recreational opportunities, and a forest products industry that contributes billions of dollars to Missouri’s economy annually. 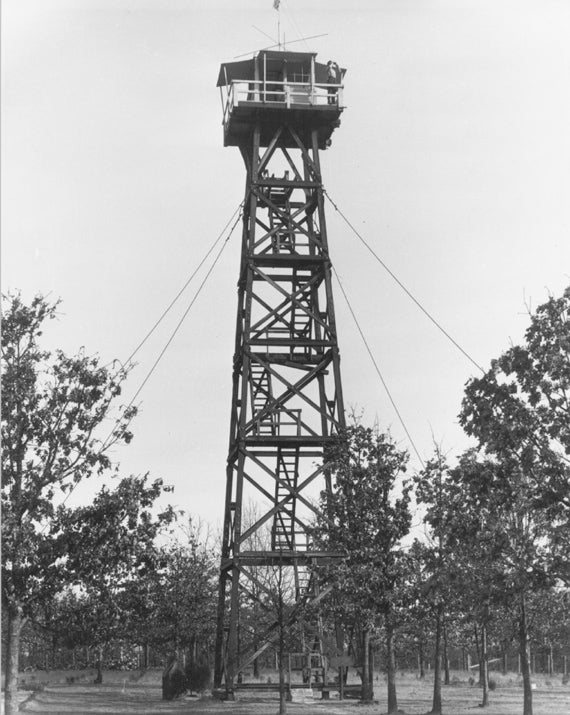 Is user submitted
Caption
The Kelleter Lookout Fire Tower on Pea Ridge in the Meramec Forest was commissioned in 1941.
Credit
MDC
Right to Use
Media
Image 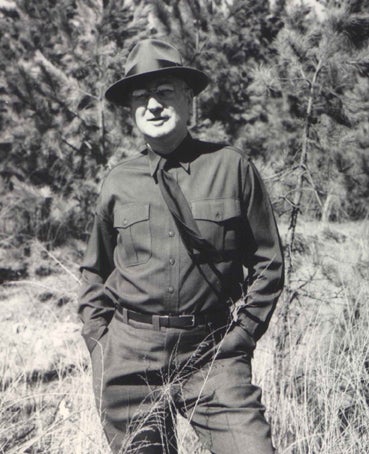 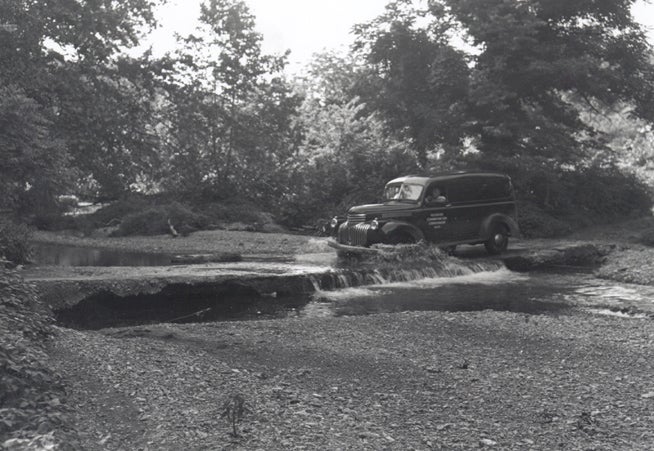 Is user submitted
Caption
The Forestry Division’s Showboat vehicles visited rural schools in the Ozarks to show fire protection movies from 1937 to the early 1950s.
Credit
MDC
Right to Use
Media
Image 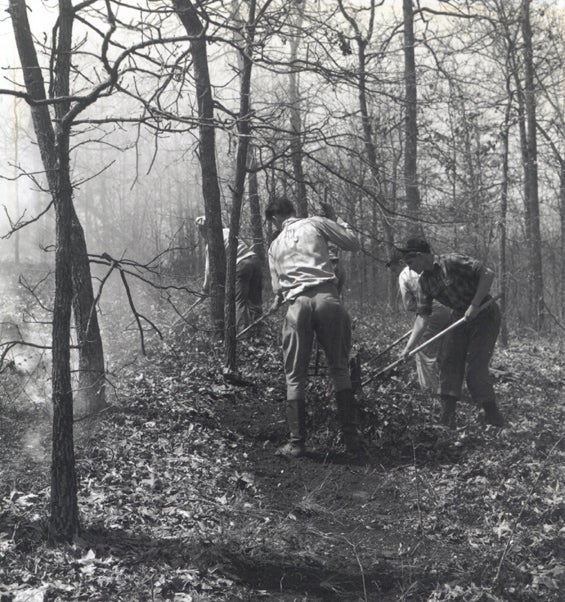 Is user submitted
Caption
From the start, fighting forest fires was job number one for the Conservation Department. Volunteers were important partners in controlling fire.
Credit
MDC
Right to Use
Media
Image 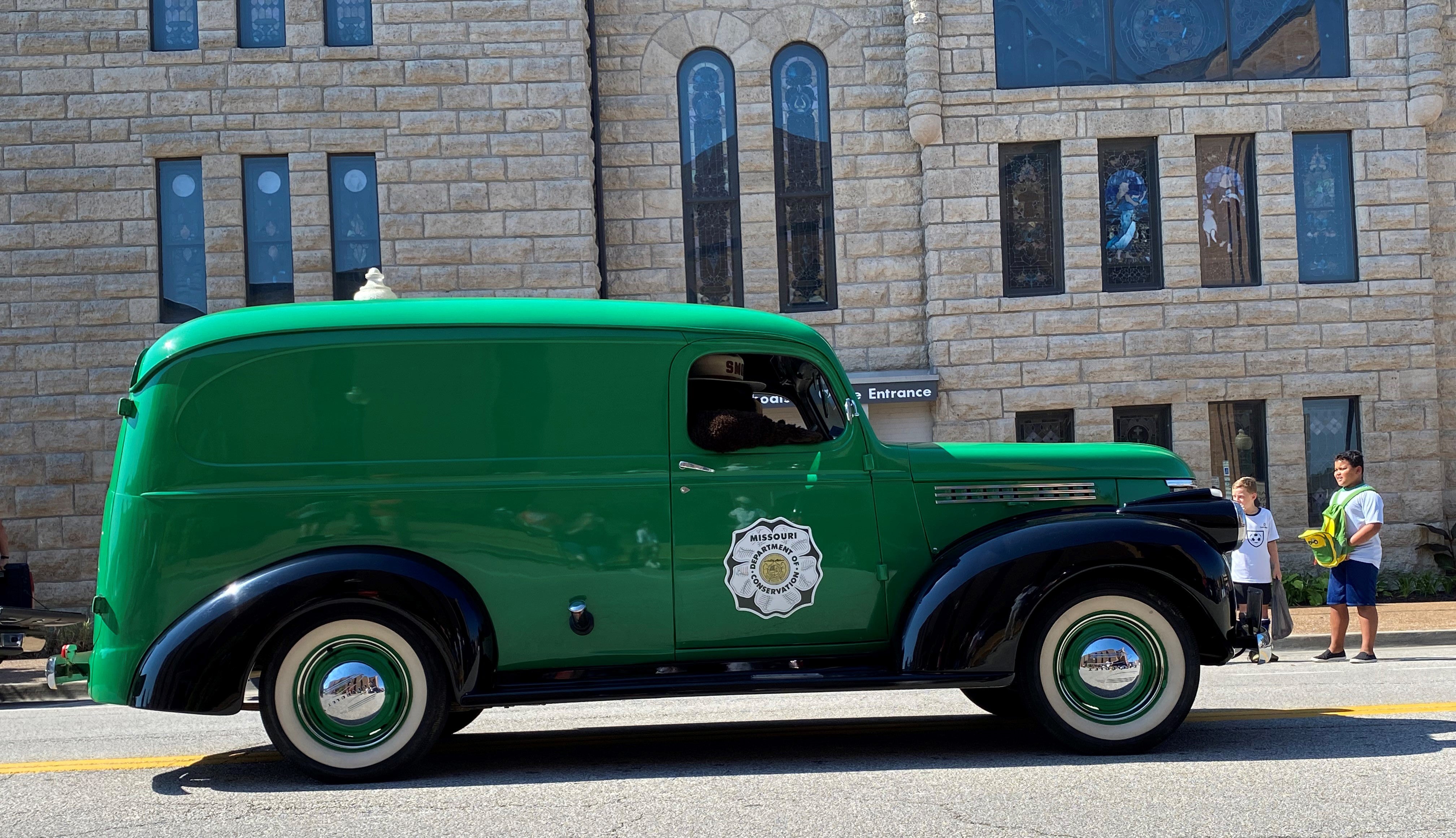 Is user submitted
Caption
One of the old Showboat vehicles in the 2021 Missouri Bicentennial Inaugural Parade in Jefferson City.
Credit
MDC
Right to Use
Title
By the Numbers
Body

$10 billion in annual revenue — Added to Missouri's economy for harvesting and processing trees into wood products, providing jobs for thousands of people.

Thousands of pounds — Seeds collected or bought by MDC each summer and fall to grow 70 different species including walnuts, white oak acorns, hazelnuts, and plums.

30 percent — Average reduction in winter heating bills by a few well-placed trees around a house. Likewise, strategically placed shade trees can reduce air conditioning and cooling costs in summer by the same amount.

25 to 30 years — Average life of a tree on an urban street or in a heavily used city park.

4,000 pounds — Weight of one cord of air-dried oak firewood.

13,000 board feet of lumber and 9,500 square feet panel products — Used by an average 2,000 square-foot, single-family home. Panel products includes products ranging from structural beams and roof supports to the sheathing, trim, and paneling.

400 Certified Tree Farmers — Tree farmers own about 120,000 acres of forest in Missouri.