Spotted knapweed (Centaurea stoebe micranthos) was likely introduced into the United States in 1890s through commercial seed imports from Eurasia. It prefers sunny, well-drained soils. Knapweed is often found in heavily disturbed sites, such as roadsides, gravel pits, and agricultural field margins, but also can be present in undisturbed dry prairies, oak and pine woodlands and rangeland.

Spotted knapweed is a tap-rooted, short-lived perennial. A single plant can have as few as one stem or as many as 20. By the end of the first year, a knapweed plant is a small basal rosette. It usually bolts in the second year producing branched stems up to 4 feet tall. The plant gets its name from the spotted bracts immediately below the numerous, pink flowers. Its flowers resemble thistle flowers and bloom in June and July.

Knapweed can produce as many as 1,000 seeds per plant. The seeds are the main form of dispersal and can be as abundant as 5,000 seeds per square foot. They can remain viable for at least eight years. The seeds have pappuses (little hairs) that enable wind dispersal.

As spotted knapweed seeds mature in late summer and fall, they can be spread on mowing equipment and in infested hay, seed and gravel. When purchasing hay, seed or gravel, it is important to know the location of the source.

Seeds can also spread by hitchhiking on vehicles, other equipment, and even clothing. Always clean anything exposed to spotted knapweed infested areas while mature seeds are present to prevent spreading seeds to new areas. Natural pathways for spread include wind and water. 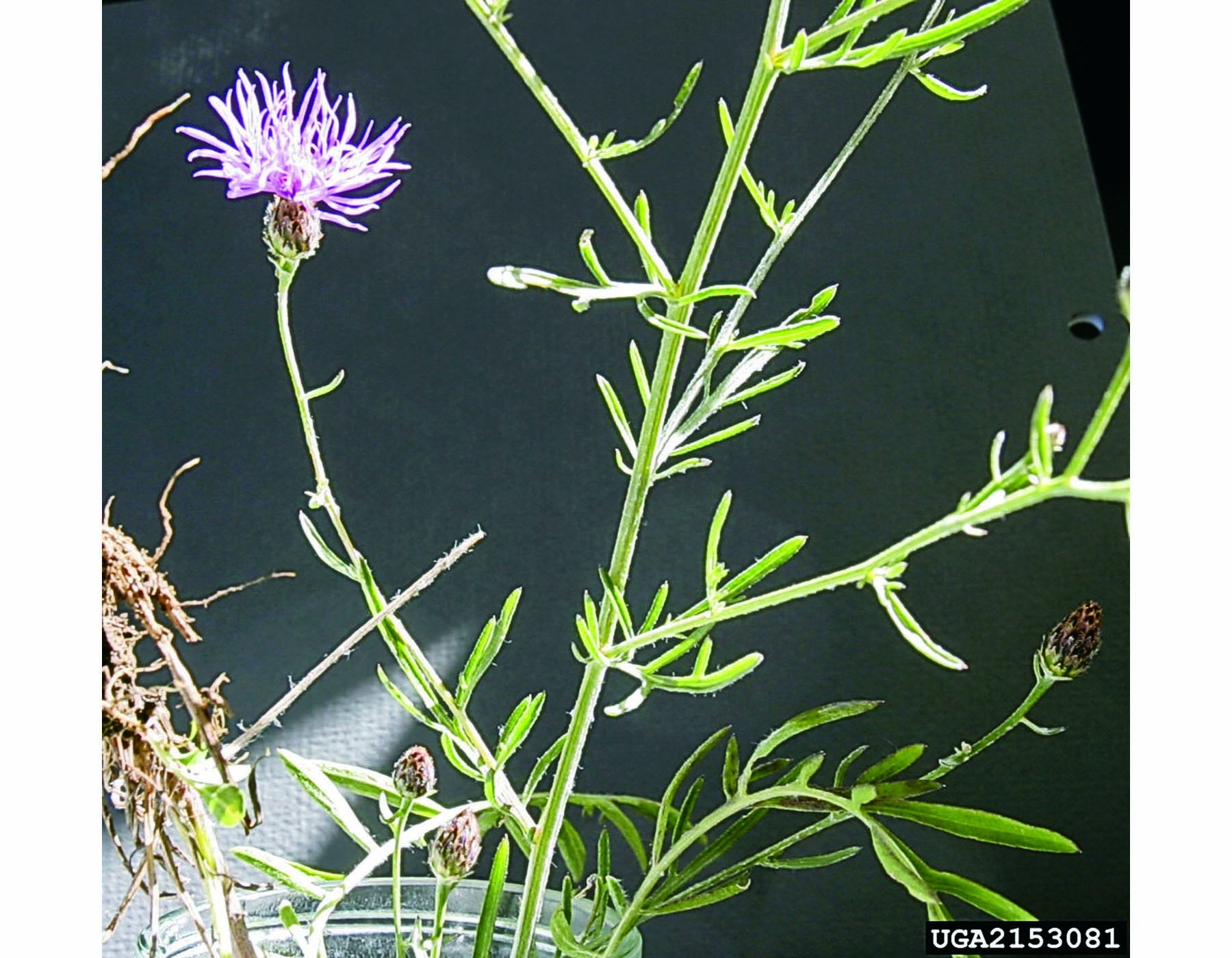 This plant produces chemicals that inhibit growth of surrounding plants. This reduces the amount of diversity in the area and degrades wildlife habitat. It is unpalatable to wildlife and most livestock, so food sources become limited as well. Runoff, erosion and sedimentation increase, affecting streams and aquatic organisms.

The Missouri legislature designated spotted knapweed a noxious weed in 2008.

Hand-pulling is effective for small infestations if completed prior to seeding. Remove the entire crown and taproot to prevent regrowth. Use of gloves is necessary as this plant contains an irritant.

Long-term grazing by sheep and goats also can be successful in controlling the plant. These activities will have to be repeated each year until the seed bank is exhausted.

The most effective control strategy for large infestations is an integrated approach using bioagents, mechanical removal, and herbicides.

The recommended chemical control is the application of a herbicide containing aminopyralid, such as Milestone, in the spring before the plant flowers. Applying 2,4-D to rosettes in the fall or early spring also is effective. Read and follow all herbicide label directions.

Bioagent insects are being used in Missouri and many other states to control large stands of spotted knapweed. The most effective insects include a combination of seedhead (Larinus minutus) and root-boring (Cyphocleonus achates) weevils. These insects have been approved by USDA/APHIS, and only survive as long as knapweed is present.

Burning and mowing are not effective control measures.