Crown vetch is a perennial, herbaceous plant in the pea family. It can spread rapidly by seed and by its multi-branched, creeping rhizomes. Crown vetch was introduced into the United States in the 1950s for erosion control and today is found in all but four states. Its pea-like, pinkish white flowers bloom from May through August. Its creeping stems, which grow from 2 to 6 feet long, create areas with large clumps of the plant.

Crown vetch is a serious management threat to natural communities due to its seeding ability and rapid vegetative spreading by rhizomes. Dense stands of crown vetch shade out native plants and inhibit their growth. This aggressive exotic is now widespread along roadsides, from where it may become a serious invader of Missouri's natural communities. 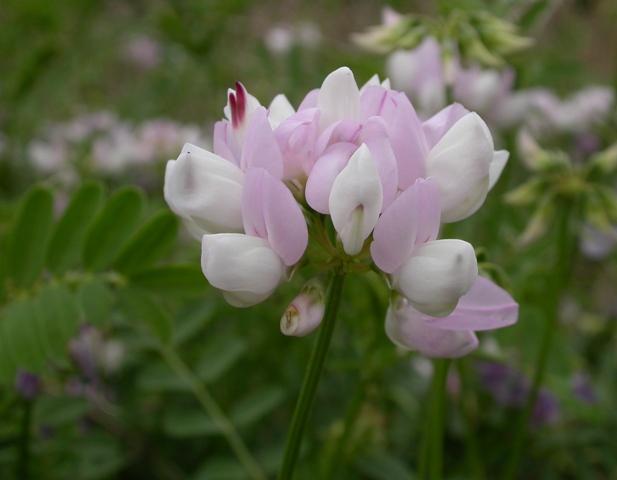 Is user submitted
Caption
The flowers of crown vetch are pinkish to white and are in crown-shaped clusters. Each individual flower is shaped like a typical pea flower.
Title
Control Recommendations

While not completely controlling crown vetch, mowing offers a method of stopping its spread.

Repeated late spring mowing has shown some success. The best method may be to perform several mowings per year over several years.

Mowing around the periphery of a natural area threatened by crown vetch may keep the vetch from spreading into the natural area vegetatively but will not control the spread of seeds.

Herbicides, at the present time, appear to be the most effective means of control. Three different herbicides (2,4-D amine, Triclopyr, and Glyphosate) have been used with varying success. Another herbicide that shows some promise but has not been tested sufficiently yet is Clopyralid.

2,4-D amine applied during the growing season will kill back the above-ground portions, although there has been some survival of crown vetch in treated areas. This ineffectiveness of the herbicide could be the result of incomplete treatment, or re-establishment through seeds. There are some formulations of 2,4-D amine made just for controlling legumes. These formulations have not been tried but may do a better job of controlling crown vetch. 2,4-D amine has the advantage of being dicot specific, so grasses will not be harmed.

Glyphosate, sold under the trade name Roundup, has also been successful, but not 100 percent. A 1- to 1.5-percent solution of Glyphosate has been used and has killed back crown vetch with results similar to 2,4-D amine.

It is believed that incomplete herbicide coverage was the reason for survival of crown vetch in some treated areas. Many crown vetch infestations may be a single plant or only a few plants, and it may be necessary to get uniform coverage over all the above ground stems.

Small populations of single plants have been successfully controlled using Glyphosate. Glyphosate is a nonselective herbicide, so any other plants covered with the herbicide will be affected. Rodeo should be used, rather than Roundup, for infestations along streams or near any other aquatic community.

Triclopyr, under the trade name Garlon 3A has shown the most promise to date. A 2-percent solution has been successful in killing 99 percent of the crown vetch in large infestations. The 1-percent survival rate may be due to incomplete coverage or re-establishment by seeds. It is thought that incomplete coverage may be the reason for less than total control.

Triclopyr has the advantage that it is dicot specific. Some brown out of grasses may occur but is usually only temporary.

Another herbicide that may be successful is Clopyralid under the trade name Transline. Transline is more specific than Triclopyr, it is quite effective on the plant families: Compositae, Leguminosae, and Polygonaceae, with very little effect on most grasses and most other plant families. Because of the very specific nature of Clopyralid, fewer non-target species will be affected.

Clopyralid has been successful in controlling crown vetch along roadsides. There is no research on the relative success of Clopyralid. Clopyralid shows promise, but more research is needed.

These herbicides can be used as spot treatment with backpack sprayers, or can be used with high-volume equipment (e.g. booms). Whichever herbicide is used, it appears that complete coverage of all crown vetch stems is necessary. The spray on the leaves should be thorough to the point of runoff.

Prior prescribed burning will be helpful to remove accumulated plant litter to insure complete herbicide coverage of the foliage. It is necessary to perform a follow-up treatment to get any stems missed or new seedlings. By law, herbicides may only be applied according to label directions.

Crown vetch spreads rapidly and appears to be difficult to control. Several years of treatment may be necessary to totally eradicate crown vetch from a natural community. It is important to prevent any seed production as well as to control the vegetative spread.

It is useful to map locations of infestations so that they can be readily located in future years. When crown vetch is blooming, its many pink blossoms make it quite noticeable and easy to locate. New populations can be located and treated during blooming. Previously located populations should be treated earlier and retreated later.

Crown vetch has many characteristics that make it a tough exotic to control. It is necessary to locate it early and start treatment early. Watch for it along highway rights-of-way and eradicate it before it invades a natural community.

Seedlings and re-sprouts can be difficult to locate in native vegetation. Thick native vegetation can make detection of small plants difficult. Prescribed burning may be useful in removing litter for detection, but later in the season some plants may go unnoticed.

Prescribed burning alone has not been successful.