Hydrilla (Hydrilla verticillata) is a federally listed noxious weed that can harm our aquatic resources. It is a submerged aquatic plant that is native to the Indian subcontinent and was introduced to the United States in the early 1950s, most likely through the aquarium trade.

At least 29 states including Missouri are dealing with introduced populations of hydrilla. The first documented sighting of hydrilla in Missouri was in 2012 in a private pond in northeastern Greene County. Since then it has been found in Dallas, Warren, and St. Louis counties.

Hydrilla not only hinders aquatic life, it can also help spread disease to waterfowl and raptors. Hydrilla has been linked to avian vacuolar myelinopathy (AVM). It serves as a host plant to a species of blue-green algae (cyanobacteria) that produces a novel neurotoxin linked to the disease. Studies have shown that removing hydrilla can eliminate the AVM deaths to birds in that area.

Hydrilla’s impacts reach farther than just ponds, lakes, rivers, and streams. Many local economies in Missouri will be devastated when people are no longer able to fish, float, and enjoy nearby streams and lakes. If hydrilla infests source water supplies, drinking water and hydro power generation will be more costly, which means higher water and electric bills. 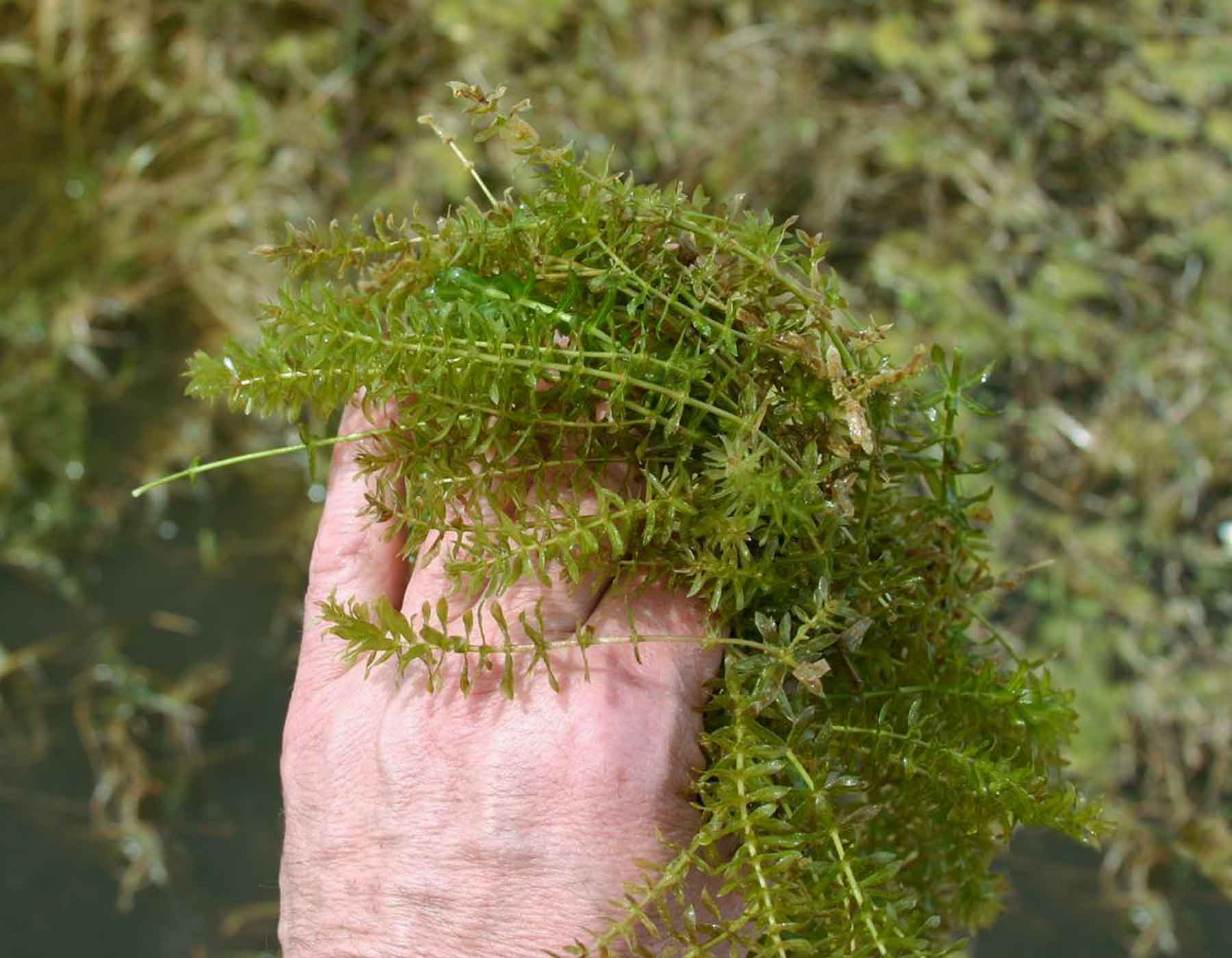 Title
How to Identify Hydrilla

Hydrilla can quickly spread through ponds, lakes, reservoirs, and even streams. It only takes one small piece of plant to start new growth. Hydrilla can be spread by:

A plant fragment containing at least one leaf whorl has the potential to start a new plant. The more whorls on the fragment, the more likely it will succeed.

Tubers are underground growth structures. Under ideal conditions, approximately 6,000 tubers can be produced per square meter. Some hydrilla tubers can stay viable in the soil for4 to 10 years.

Turions are buds that detach from the plant and overwinter on the surface of the sediment. Turions only survive about eight months, but this is long enough for them to produce new plants the following spring.

Seed dispersal actually plays a minor role in new plant generation. The persistence of this invasive plant’s tubers and multiple methods of propagation have caused experts to label the plant as the “perfect weed.”

Title
How You Can Help Control Hydrilla

Hydrilla can live in any size or type of water body. From backyard water gardens to large lakes and streams, nothing is immune from hydrilla’s impact. Water depth and clarity are not deterrents. Hydrilla needs very little light and grows in areas where many native aquatic plants cannot. In clear water, hydrilla has been found at depths of more than 30 feet. Hydrilla can grow up to an inch per day.

Once established, hydrilla is difficult to eradicate. Due to the resprouting of tubers in the mud, it takes at least four to five years of successful, season-long control to rid a site of hydrilla. In most cases, control means several applications of expensive aquatic herbicides throughout the growing season each year.

Please take the following precautions to prevent the spread of hydrilla.

For more information on cleaning options, go to stopaquatichitchhikers.org/prevention.

Never release plants, fish, or animals into a body of water unless they came out of that body of water. This includes live bait and aquarium contents.