Sericea lespedeza (Lespedeza cuneata) is a warm-season, perennial legume with herbaceous to somewhat woody stems, with many erect, leafy branches. Since its introduction into Missouri last century, sericea lespedeza has been widely planted and has become naturalized in most, if not all, Missouri counties.

Numerous stands along roadways continue to provide a source for spreading this plant into surrounding natural habitats. Each stem can drop a thousand seeds and these seeds can remain viable for 20 years or longer. Sericea lespedeza is designated a noxious weed in several Kansas counties.

Sericea lespedeza has a deep tap root that allows it to outcompete native plants for water and nutrients, especially in times of drought. It also contains tannin that makes it unpalatable, causing livestock to overgraze surrounding native plants, which reduces biodiversity and competition to further sericea growth. Studies have shown that quail forage on this plant, contributing to short-distance dispersal of seeds; however, it does not contain the protein quail need to thrive. Also, chemicals produced by the sericea stunt the growth of surrounding plants. 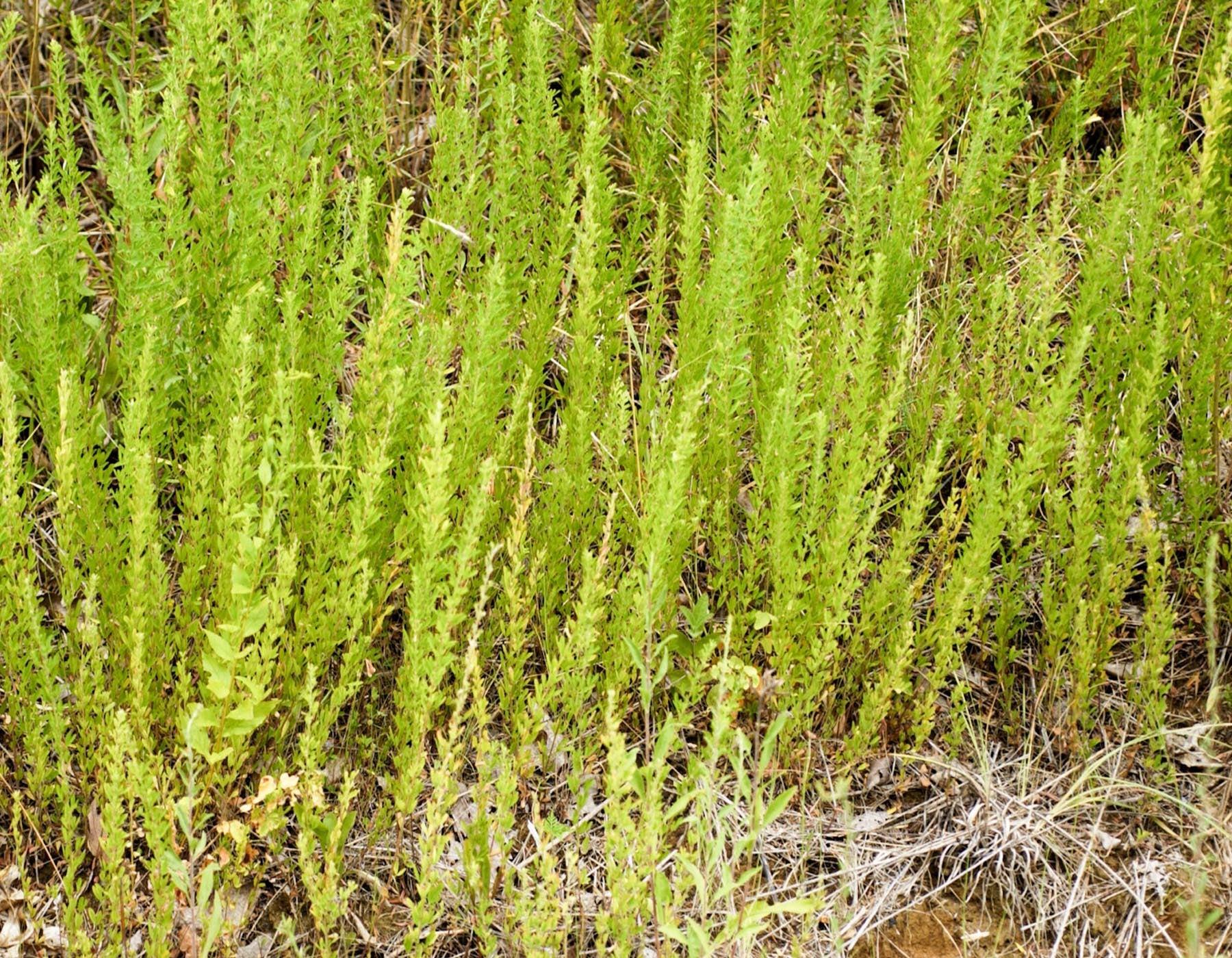 Is user submitted
Caption
Sericea lespedeza was introduced decades ago in hopes it would provide hay, improve pastures, stop soil erosion, and supply food and cover for wildlife. Unfortunately, it has proven to be an aggressive, invasive weed that is extremely difficult to control, escapes cultivation, and outcompetes native plants.
Credit
MDC staff
Title
Control Recommendations
Body

Options available for control of sericea lespedeza include prescribed burns, grazing management, and mechanical and chemical methods. There are no biological controls approved for sericea lespedeza at this time other than grazing.

Rangelands can be managed to control sericea lespedeza by burning, grazing, and fertilization. Prescribed burning of native grass in the late spring followed by intensive grazing with mature cattle will increase utilization of sericea lespedeza. Grazing infested sites with sheep and goats will provide effective control. Pastures should be properly fertilized and grazed during April and May to reduce the occurrence of sericea lespedeza.

Fire has been used on non-rangeland infestations with some success. Late spring burns (May 15 to the end of June) may be effective if a fire will carry through the area at that time. Seed dormancy of sericea lespedeza can be broken by prescribed burning but resulting seedlings may be less viable. Breaking seed dormancy by burning may be preferable to allowing natural processes to accomplish this, since a persistent, long-lived seed bank may add new plants to the site for years to come. By forcing more seeds to germinate, following up with a mechanical or chemical treatment may have more long-term effects.

More recent research indicates that burning in September, particularly September 1 thru September 21, can be effective at killing adult plants, removing the current crop of seed, and preparing the field for chemical treatments the following spring. September burns:

The most effective and economical treatment to date is an herbicide combination of triclopyr and fluroxypyr (PastureGard) which can be applied throughout the growing season once plants are at least 12 inches tall (usually June 1 through September 30).

Other treatments containing triclopyr (e.g. Garlon 3A, Garlon 4) or metsulfuron (e.g. Ally, Escort, Cimarron) have also been shown to be the effective herbicides for sericea lespedeza control. Triclopyr at 1/2 pound acid equivalent per acre or metsulfuron at 0.3 ounces of product per acre can provide effective control of sericea lespedeza treated during the vegetative stage prior to branching or during flowering. Ground application of herbicides should be in 10 to 20 gallons of solution per acre to insure adequate coverage.

Imazapic (Plateau, Panoramic) is effective as a pre-emergent to help control new seedlings when applied the last week of March thru April 15. This means it is best applied to areas prepared for new plantings of native warm-season grasses, and areas that have been burned or close-mowed the previous fall, winter, or spring.

Cool-season grasses and legumes can be damaged or killed by imazapic, so it should not be used on new plantings of these forages, or applied at the lowest range allowed by the herbicide label to limit damage. Most native warm-season grasses are tolerant of imazapic, but check the label for the species you are dealing with.

Aminocyclopyrachlor (Perspective, Streamline) is a relatively new selective herbicide that provides both foliar control of existing plants as well as pre-emergent activity to control seedlings the following spring with minimal negative effects on cool- or warm-season grasses.

Control of sericea lespedeza requires a long-term commitment and patience. It will not be accomplished by a single treatment or practice. Follow-up treatments will be required for up to four to five years, but by year two or three, results should be noticeable and the intensity of the treatments reduced.

Control is more effective when two or more treatment types are combined, such as:

In rangeland situations, intensive, early stocking (doubling the normal stocking rate from May 1 to July 15 and then removing the livestock) with steers has not provided consistent utilization of sericea lespedeza.

2,4-D was not found to provide effective control for sericea lespedeza in rangeland applications.