White sweet clover (Melilotus albus) and yellow sweet clover (M. officionale) are native to Europe and Asia and can now be found in all 50 states. Sweet clovers have been cultivated as a forage crop, soil builder, and nectar source for honeybees. Cultivation is now discouraged because these clovers tend to degrade native habitats.

Sweet clovers readily invade open habitats. They have successfully exploited many Midwestern native prairies and open, unflooded communities. Sweet clover's ability to set thousands of seeds, each of which can stay viable for more than 30 years, is one reason it is invasive. 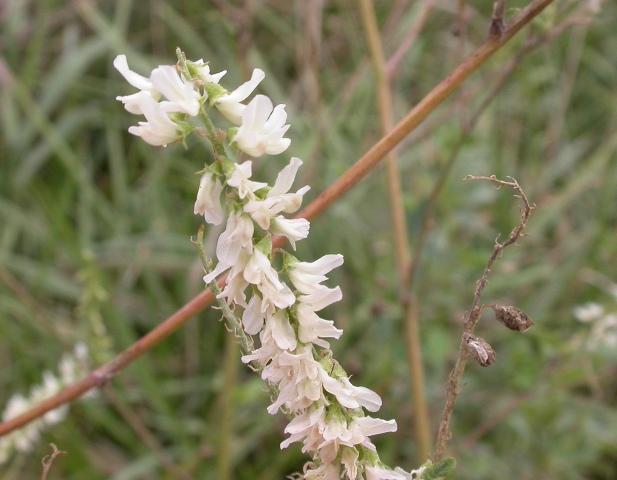 Hand-pulling is effective if done when the ground is moist and most of the root can be removed. The best times to hand-pull sweet clover are in the late fall, after the first-year plant root-crown buds have developed, or anytime early in spring, before second-year plants develop flower buds.

Fall weeding is recommended because:

However, sweet clover is easily located in the spring also, because it becomes green before native prairie vegetation. Hand-pulling in summer can be effective if done when the ground is moist.

Hand-pulling is labor-intensive and must be done consistently. This treatment is feasible for light and moderate infestations, but may be too time consuming in heavy infestation.

In large, dense colonies of sweet clover, cutting first and second year stems close to the ground with a hand-held scythe is effective if done after leaves on the lower stems have died (before flowering occurs) and up to early stages of flowering (before seeds form). Sweet clover usually does not re-sprout when the stems are cut close to the ground during this time.

Heavily infested stands are best controlled with the above sequence twice, separated by two years without burning. Problems with this method may arise if the burn is patchy, leaving viable seeds or second-year shoots unscathed.

In an uneven-aged stand of sweet clover, second-year clover may escape the harmful effects of the early first-year burn because their shoots were not fully emerged. These plants would live to set seed. In this case, a combination of other procedures can be used:

In an even-aged stand of sweet clover, fall mowing can speed up the two-year burn program. In this situation, one should burn in April; mow first-year plants in August, leaving the stems behind to dry; and burn again in mid- to late September.

Use the same practices as given above for high quality areas, with the addition of herbicides.

Herbicide can be useful in controlling large sweet clover populations in degraded areas. Following a fall burn, hand spray individual seedlings with an amine formulation of 2,4-D according to label instructions in spring, before native prairie vegetation emerges. This treatment also is effective when plants are in the cotyledon stage (i.e., when the first leaves appear in the development of the seedling). To reduce vapor drift, use an amine formulation of 2,4-D rather than an ester formulation. A 1-percent solution of Mecamine (2,4-D plus Dicamba) applied to the foliage as a spray is very effective. The herbicide 2,4-D amine is selective for broadleaf plants.

When applying either herbicide described above, spot application should be done such that coverage is uniform with the entire leaf being wet.

Little information is available on grazing effects on sweet clover, but observations in South Dakota suggest that bison tend to avoid it while cattle consume it quite readily. A May burn followed by grazing in September through October is effective, but a high stocking rate is required.

No effective biological controls that are currently feasible in natural areas are known.