Japanese stiltgrass (Microstegium vimineum) is an annual grass native to eastern and central Asia. First discovered in Tennessee in 1919, stiltgrass may have accidentally escaped as a result of its use as packing material for Chinese porcelain. With the exception of a few states in northern New England, Japanese stiltgrass has spread to every state east of the Mississippi and is considered invasive in 15 states. Missouri’s stiltgrass populations are primarily found in the southern part of the state.

Japanese stiltgrass occurs in a wide variety of habitats and is able to tolerate shade. The most likely places this plant can be found are moist, disturbed areas including stream banks, river bluffs, floodplains, forest wetlands, moist woodlands, early succession fields, uplands, thickets, roadside ditches, and utility rights-of-way. Stiltgrass appears to prefer acidic to neutral soils that are high in nitrogen.

Each plant produces hundreds of small, yellow to red seeds that can remain viable in the seed bank for upward of five years. Stiltgrass plants die each fall and reproduce mainly by seed. Plants also form roots at the nodes, which allows for new vegetative stem growth. Seed can be transported long distances by water or contaminate hay, seed mix and soil. People can spread stiltgrass by carrying the seeds on their shoes, equipment and vehicles.

Japanese stiltgrass is especially well adapted to low-light conditions. It is a threat to native plants and natural habitats in open-to-shady and moist-to-dry locations. Stiltgrass forms dense patches displacing and outcompeting native species.

Stiltgrass is unpalatable for wildlife. Where white-tailed deer are overabundant, they may aid stiltgrass invasions by avoiding stiltgrass and feeding on native plants. In some cases, stiltgrass has been known to completely replace ground vegetation in three to five years. Stiltgrass alters soil chemistry, which has been shown to reduce small-insect diversity and encourage the presence of mites. 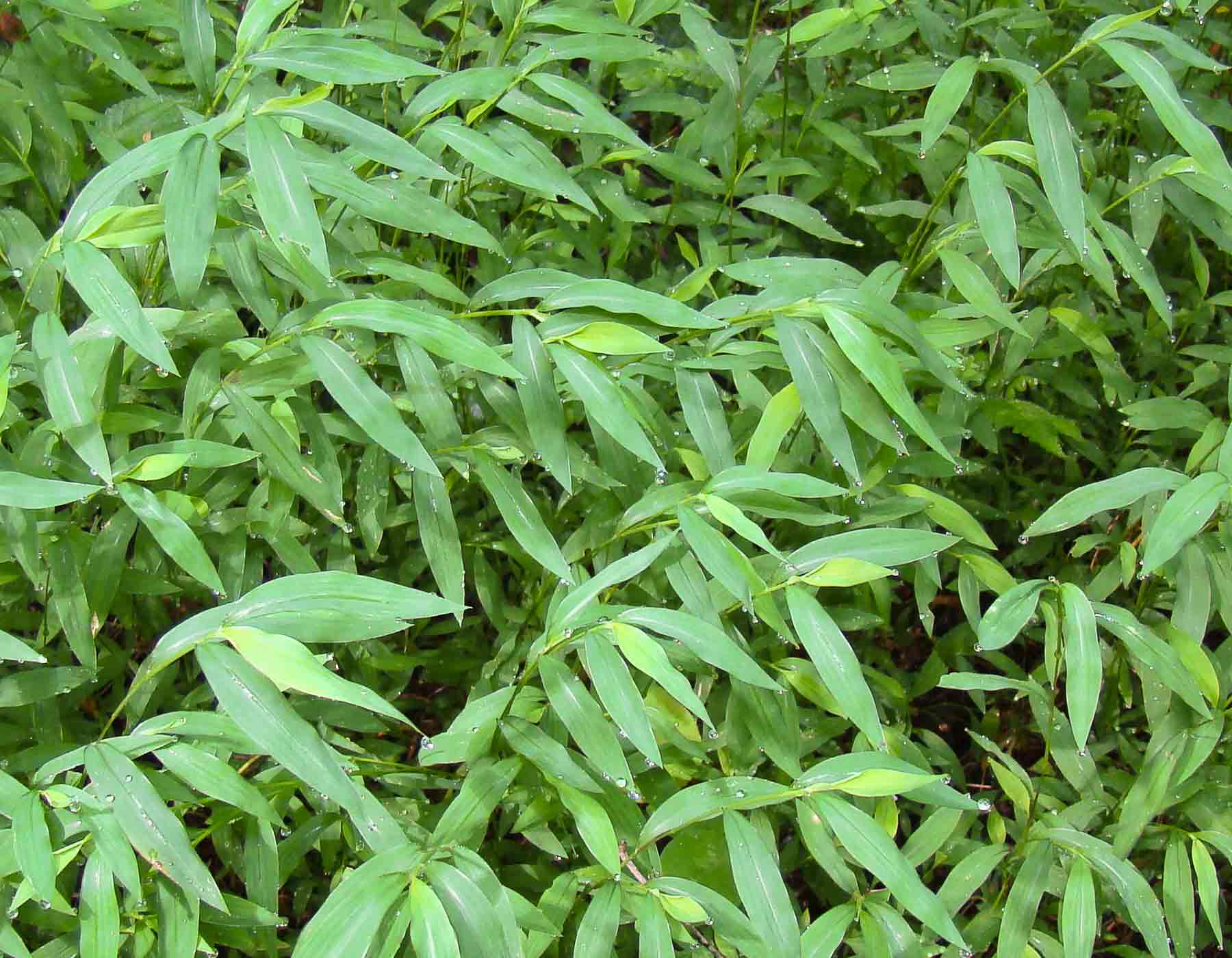 To control small populations of Japanese stiltgrass, remove the plants by hand or mow in early August before the plants go to seed.

If mowing occurs after the seeds set, seeds can be easily transported to new locations on contaminated equipment.

Always clean equipment after use in areas with invasive plant seed.

These practices must be carried out for several years due to the long seed-bank viability.

Hand pulling Japanese stiltgrass can damage native plants and disturb the soil, which provides opportunities for other invasive plants. To cause less damage to native broadleaf plants, use grass-selective herbicides with active ingredients fluazifop-p-butyl (such as Fusilade) or sethoxydim (such as Poast) in July and August before seed is produced.

Annual herbicide applications will be necessary to control plants that germinate from seed that remains in the soil from past years.

If replanting is necessary after Japanese stiltgrass is eradicated, use local native plants.