Japanese knotweed (Fallopia japonica) is an herbaceous perennial plant from Asia. In 1825 it was introduced from Japan to the United Kingdom as an ornamental plant. Knotweed was then brought to North America in the late 1800s for use in landscaping and erosion control. Due to its aggressive nature, many states now prohibit its use.

Japanese knotweed spreads primarily by vegetative means with its vigorously growing rhizomes, which are very durable and survive for decades. A small piece of rhizome moved to another site will give rise to a new plant, as often happens on eroding stream banks. Colonizing along streams by seeds as well, knotweed will ultimately dominate the streamside habitat. Knotweed also spreads along roads during routine mowing and is often transported to new sites in fill dirt.

Japanese knotweed grows quickly to form dense thickets that exclude native ground flora and prevents native trees and shrubs from establishing. Knotweed poses a significant threat to streamside areas, where it can survive severe floods and can rapidly colonize scoured shores and islands. The coarse rhizomes do not stabilize the banks as well as the finer roots of trees or grasses, making the stream banks more prone to erosion. 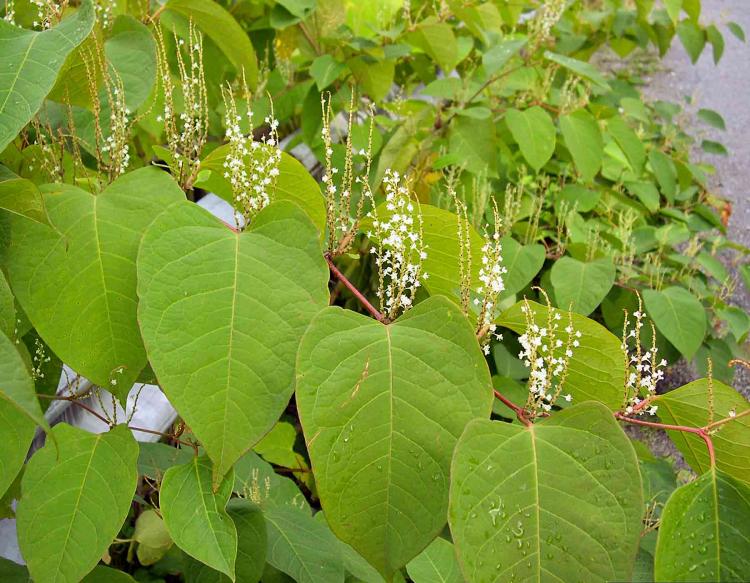 Is user submitted
Caption
One of the worst invasive species in the world, Japanese knotweed can thrive in many places and can even damage foundations of buildings—not to mention the harm it causes in natural habitats. Learn to identify it so you can prevent its spread.
Credit
Tom Huette, USDA Forest Service, Bugwood.org
Right to Use
Link
Learn more about Japanese Knotweed
Title
Control Recommendations
Body

Manual control is not an effective treatment for Japanese knotweed due to its substantial root system.

A foliar herbicide solution may be applied prior to seed formation in early summer and in the fall, often as a re-treatment. Effective herbicides include triclopyr, glyphosate, imazapyr and picloram used separately or in combination.

Because knotweed thrives in streamside areas, choose herbicide based on location of plants and presence of non-target vegetation. Do not use triclopyr and picloram in wetlands or adjacent to water.

If foliar spray is not practical, try cutting along with use of herbicides. Cutting will remove the above-ground plant and stimulate the rhizomes below ground, so follow-up with herbicides is necessary.

A newer and very effective control method involves injecting a glyphosate solution into each stem using specialized equipment. The glyphosate is absorbed into the rhizome with visible results in two weeks. Stem injection reduces effects on surrounding vegetation and may be used at any time during the growing season. Multiple treatments within one growing season and in subsequent years will be needed for well-established populations regardless of control.