Common reed produces tall, hollow stems that can reach heights of up to 15 feet. It occurs in disturbed or pristine wet areas, including wetlands, shores of ponds and lakes, marshes, springs, riverbanks, roadsides and ditches. Common reed grows best in areas with slow or stagnant water and can tolerate frequent, prolonged flooding, seasonal drying, and moderate salinities. 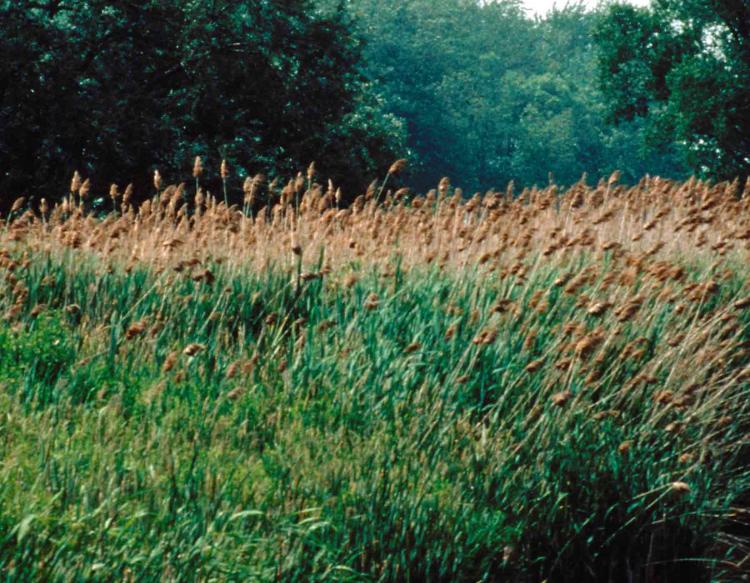 The most effective control for common reed is the use of foliar-applied herbicides. Imazapyr and glyphosate, alone or in combination, are effective at a 1.5 to 2 percent solution. These systemic herbicides are absorbed by the foliage and translocated to the rhizomes. Herbicide treatment can occur from June to September, when plants are actively growing.

For small infestations, utilize the cut-stem method from mid-summer until fall. Individual stems should be cut below the lowest leaf, with a 25 percent glyphosate solution applied into the stem and around the cut edge. If applying near or in water, use a glyphosate formulation that is approved for aquatic use.

Due to vigorous re-sprouting, mechanical control methods, such as cutting, mowing, and fire are often ineffective when used alone, but can be used in conjunction with herbicide application. Exposed rhizome fragments may freeze and dry out over the winter, reducing the density of the stand. Retreatment over several years may be necessary due to the extensive root system.

Learn the Difference between Native and Nonnative Common Reed

The subspecies of common reed are difficult to distinguish using physical features alone. However, the following characteristics of the invasive common reed subspecies (Phragmites australis australis) can help to identify it: