Musk thistle is found in waste ground, old fields and pasture, and along roads and railroads. It is a major weed in range and pasture land, a nuisance pest along rights-of-way, and a looming nightmare for lands in conservation reserve programs. It can invade native grasslands, even where existing dense prairie vegetation exists. Glade communities are also prone to infestation, especially those with grazing histories and lacking buffers of undisturbed land. 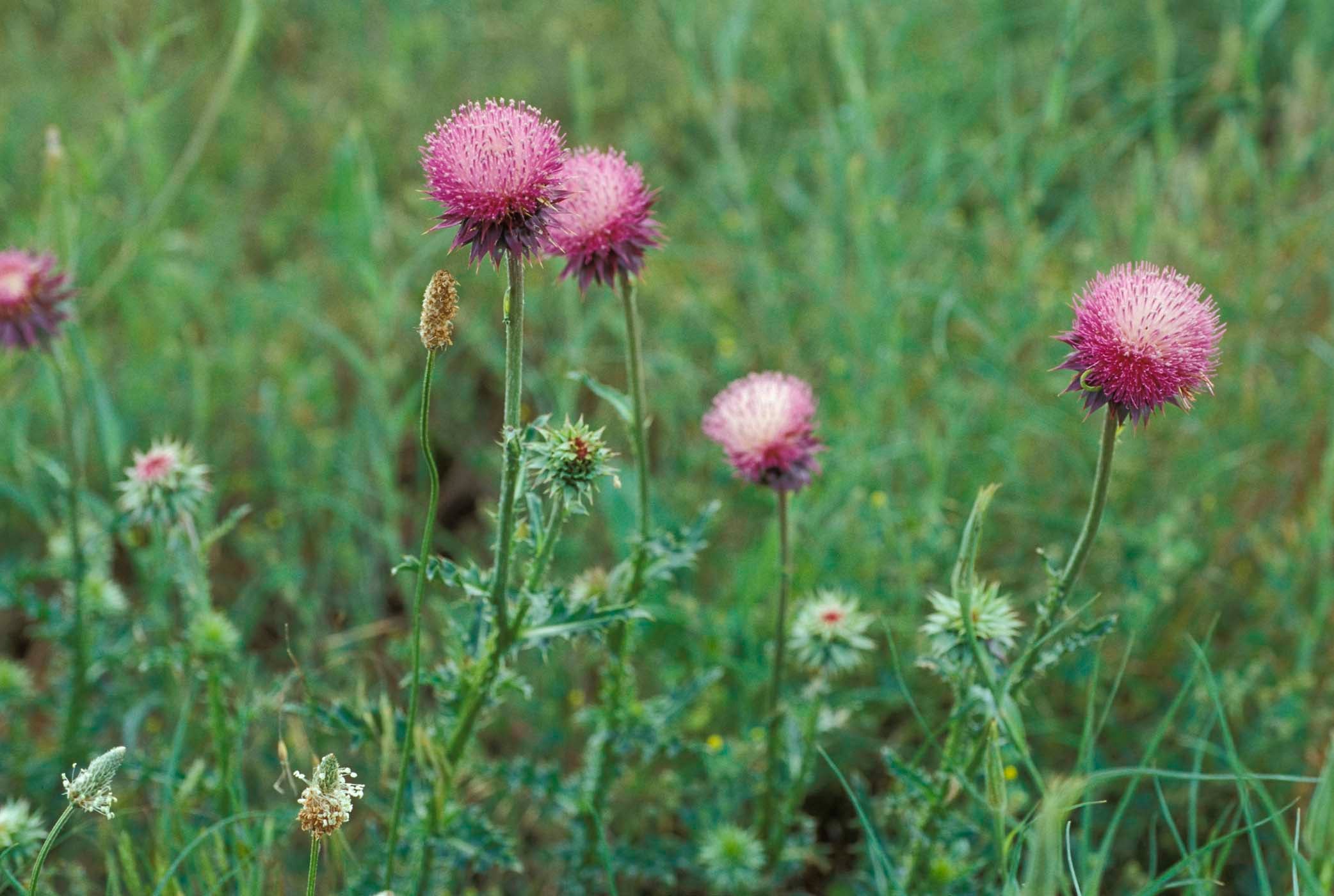 Is user submitted
Caption
Musk thistle is an invasive plant from Eurasia that is spreading in MIssouri.
Title
Control Recommendations

Cultural, mechanical, biological and chemical control methods have all been used on musk thistles with varying degrees of success in different parts of the country.

Hand-cutting or mowing can provide control if repeated over a period of years. Hand-cutting with a sharpened shovel should insure that lateral as well as the terminal bud on the root crown are destroyed. A labor-intensive hand chopping at ground level just before flowering eliminated musk thistle at Konza Prairie, Kansas from a 350-acre pasture. The plants are apparently less likely to regrow if allowed to bolt before hand chopping the root crown. Mowing should also be timed to occur just prior to flowering.

Two exotic weevils, the flower head weevil, (Rhinocyllus conicus), and the rosette weevil, (Trichosirocalus horridus) were purposely introduced from Europe and have become established in Missouri and at least ten other states. These biological control agents aid in reducing populations of the thistle.

In areas of Missouri where the weevils have been present for the longest period of time an 80- to 90-percent reduction in thistle population has occurred. These weevils are increasing and dispersing naturally. They have also been collected for recolonization throughout the state. An integrated pest management system has been developed utilizing knowledge of thistle and weevil life cycles. This program encourages survival of the weevils through a harmonious use of herbicides and mechanical control methods.

Biological control methods are intended to establish a balance between predator and target species. As a population of thistle is diminished by the weevils, weevil numbers decline. This allows the thistle to rebound and the weevil numbers to again increase. This scenario of fluctuating thistle and weevil populations does not totally eliminate musk thistle. If the thistle is eradicated from a site by herbicide application or other means, then the predator weevils will also be lost. Then future colonization of the site by musk thistle may require reintroduction of weevils or other means of treatment.

The effectiveness of chemical control is influenced by the weather and the stage of growth of the thistle at the time of application. Chemical control of all types is most effective in the rosette stage and least effective when musk thistle is in flower. By law, herbicides may only be applied according to label directions.

Due to its low cost, 2,4-D ester at 2–4 lb per acre (4.48 kg per half-acre) is the most commonly used herbicide. Application can be made aerially, with a tractor-mounted sprayer, with a backpack sprayer, or in granular form. Effectiveness depends on application when temperatures are not too cool and when it is not too dry. This may limit its use in early spring applications or in fall applications in some areas. 2,4-D is most effective when applied 10 to 14 days before bolting in the spring. 2,4-D is less effective than picloram or dicamba after plants have bolted.

Picloram alone or in combination with either 2,4-D or dicamba gives the best late-season control but is more expensive and carries more restrictions. These include restrictions on use near groundwater and on the season of use. Reports of effective use of picloram vary in recommended rates from .27 lb per acre (0.3 kg per half-acre) to 0.5 lb per acre (.56 kg per half-acre). The greatest attraction of picloram is that it provides excellent control during the cool, dry autumn season when neither 2,4-D nor dicamba is as effective, and when non-targeted vegetation is less susceptible.

Although picloram overcomes the effects of weather, it does not fully overcome the effect of growth stage. Control of dense, even height, bolted plants using picloram in a ropewick applicator was effective, but control was poor when plants were of varying heights. Concomitant with its greater effectiveness, picloram presents a greater risk of damaging non-target species. Damage to cool-season grasses was reported in a study using higher concentrations of picloram (1 pound per acre).

Fire has not been effective as a method for directly controlling musk thistle. It is difficult to generate enough heat to kill the thistle's root crown and fire-scarred plants can bolt, flower and fruit.