Multiflora rose (Rosa multiflora) is a thorny, bushy shrub that can form impenetrable thickets or "living fences" and smother out other vegetation. This plant readily invade prairies, savannas, open woodland, and forest edges. It is a serious pest species throughout the eastern United States.

There are probably no counties in Missouri where multiflora rose cannot be found today. The species was designated a noxious weed by Missouri state law in 1983. As such, Missouri counties may adopt a law that requires mandatory control of multiflora rose. 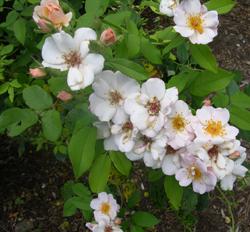 Pulling, grubbing, or removing individual plants from the soil is effective only when all roots are removed or when plants that develop afterward from severed roots are destroyed. These approaches are most practical for light, scattered infestations.

In fire-adapted communities, a routine prescribed burn program will hinder invasion and establishment of multiflora rose.

Three to six cuttings or mowings per growing season for more than one year can achieve high plant mortality. Such treatment may need to be repeated for two to four years. Increased mowing rates (more than six per season) did not increase plant mortality.

In high quality communities, repeated cutting is preferred over mowing, because repeated mowing will damage native vegetation as well as multiflora rose.

Cutting stems and either painting herbicide on the stump with a sponge applicator (sponge-type paint applicators can be used) or spraying herbicide on the stump with a low pressure hand-held sprayer kills root systems and prevents re-sprouting. With this technique, herbicide is applied specifically to the target plant, reducing the possibilities of damaging nearby, desirable vegetation.

Roundup herbicide (a formulation of glyphosate) has been effective in controlling multiflora rose when used as a 10- to 20-percent solution and applied directly to the cut stump. Although the Roundup label recommends a higher concentration for cut-stump treatment (50- to 100-percent), this lower concentration has proven effective.

Cut-stump treatment is effective late in the growing season (July–Sept), and also during the dormant season. Dormant season application is preferred because it will minimize potential harm to non-target species.

Glyphosate is a nonselective herbicide, so care should be taken to avoid contacting non-target species. Both glyphosate and picloram (Tordon RTU) are recommended for controlling established plants. (Note: some products containing glyphosate or another herbicide may be pre-diluted, so be sure to read product labels to understand herbicide concentration levels).

In addition, Triclopyr (trade name Garlon 3A) can be applied to cut stems or canes for selective control of multiflora rose. Garlon 3A diluted in water at a rate of 50 percent can be sprayed, using a hand sprayer, to the cut surface. Application should be within minutes of cutting.

Use of Garlon 3A is best done in the dormant season to lessen damage to non-target species. Great care should be exercised to avoid getting any of the herbicide on the ground near the target plant since some non-target species may be harmed. Avoid using Triclopyr if rain is forecast for the following one to four days; otherwise runoff will harm non-target species.

By law, herbicides may only be applied according to label directions.

Repeated cutting, as discussed above, is effective. For large populations on severely disturbed areas, mowing can be substituted for cutting individual plants. However, mowing multiflora rose can result quickly in flat tires. On mowers, filling tires with foam is recommended.

Fosamine (trade name Krenite) can be applied as a foliar spray in a 2-percent solution plus 0.25-percent surfactant (2 1/2 ounces of Krenite plus 1/2 ounce surfactant per gallon of water). The Krenite S formulation contains the appropriate amount of surfactant. Coverage of foliage should be complete. Krenite should be applied only in July through September. No effects will be observed during the autumn season following application. Slight regrowth may occur the following season but canes will die during the summer. Fosamine kills only woody species and is non-volatile, therefore it is the preferred foliar spray treatment.

Dicamba (trade name Banvel) is an effective foliar spray that is less preferred than Krenite. Banvel is selective against broadleaf plants, so care must be taken to avoid contacting desirable, broadleaf vegetation. It can be applied as a foliar spray in a 1-percent solution (1 ounce of Banvel per gallon of water). Though this solution can be applied any time during the growing season, best results are obtained during May and June when plants are actively growing and flowering, following full leaf-out.

One-half ounce of a surfactant (wetting agent that results in better coverage of the plant) should be added when treating dense foliage and, to enhance control in late season applications, complete coverage of all green leaves should be achieved.

CAUTION! Do not spray Krenite or Dicamba so heavily that herbicide drips off the target species. Foliar spray of herbicides should only be used in less sensitive areas because of problems with contacting non-target species.

Glyphosate (trade name Roundup) is an effective foliar spray when applied as a 1-percent solution to multiflora rose plants that are flowering or in bud. Roundup, however, is not a preferred chemical treatment because it is nonselective and the selective herbicides mentioned above are an effective alternative. Nevertheless, Roundup can be used as a foliar spray during the growing season on severely disturbed sites if care is taken to avoid contacting non-target plants.

Roundup should not be used as a foliar spray during the growing season in high-quality natural communities because it can be result in damage to non-target species. Roundup is useful as a foliar spray for exotic plants that remain green and retain their leaves after native vegetation is dormant or senescent. Multiflora rose does not fit this description adequately and is controlled most effectively when treating during the growing season.

No effective biological controls that are currently considered feasible in natural communities are known.

Rose rosette disease (RRD) is a fatal disease of multiflora rose and some cultivated roses, first described in the 1940s. The disease is caused by a virus-like particle transmitted by an eriophyid mite (Phyllocoptes fructiphilus K.). During past drought years, mite populations built up and RRD spread through much of the Midwest. The disease kills infected roses within two to three years and has already reduced weed populations in some areas. Pruning of multiflora rose will encourage succulent growth, which is more susceptible to mite infestation. Pruning may be practical in areas where RRD is present to encourage the spread of the disease. However, RRD may also infect native roses and plums, as well as commercially important plants in the rose family such as apples, some types of berries, and ornamental roses

The rose seed chalid (Megastigmus aculeastus var. nigroflavus), a small wasp-like insect also imported from Japan, attacks developing seed of several rose species. By destroying large amounts of seed, the chalid limits new infestations. Research on the impact on cultivated roses along with studies on environmental limitations are currently being conducted. Both RRD and the rose seed chalid have been documented in Missouri, but not in all counties. Once more is known about the biology of these two control agents, RRD and the rose seed chalid could provide effective control of multiflora rose in areas where other methods are not feasible or are undesirable.