Chinese yam (Dioscorea oppositifolia, syn. D. batatas) is also known as cinnamon vine or air potato. It was brought from China to North America in the 1800s for food, ornamental, and medicinal uses. It escaped cultivation by the mid-1980s and is now found throughout the eastern and central United States, including a number of counties in southern Missouri. It continues to be sold as an ornamental plant, but its use should be strongly discouraged.

Chinese yam is an aggressive vine. It becomes established in mesic bottomland forest; along streambanks, drainages, fencerows, and roadsides; and at old homesites. It can grow in full sun to full shade but prefers partial shade. It is tolerant of most soil conditions but is most aggressive in silty loam soils rich in nitrogen associated with riparian habitats.

The vine forms small bulbils that resemble little potatoes in the axils of its leaves. New vines quickly sprout from these bulbils, which typically drop off the vine and can be easily carried to new locations by water or rodents or in topsoil moved for construction purposes.

The vines of the aggressive Chinese yam can overtake acres, smothering plants on the ground as well as shrubs and trees, blocking their access to light. Its heavy vines, like those of kudzu, can break the limbs of large trees. It outcompetes and displaces native plants, reducing plant diversity, and is of little value for wildlife. 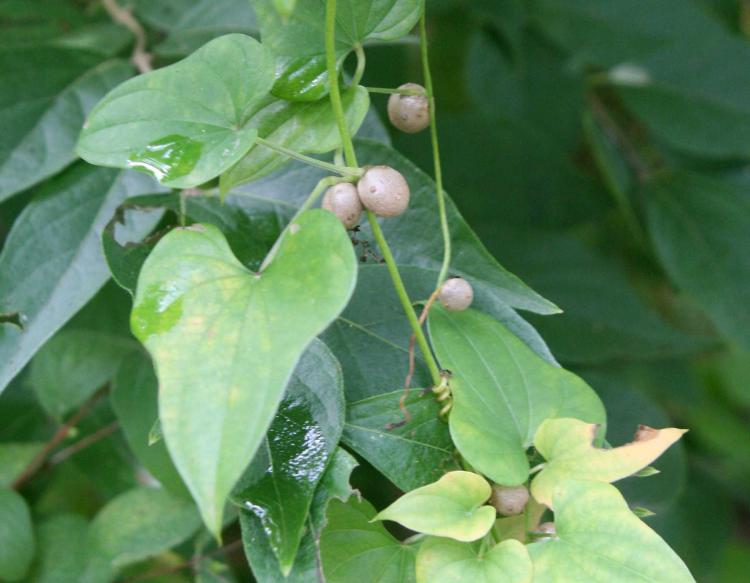 Is user submitted
Caption
New vines quickly sprout from the bulbils of Chinese yam. Even a small piece of a bulbil will sprout into a new vine, the way a small piece of a potato can create a new plant.
Credit
Chris Evans, Illinois Wildlife Action Plan, Bugwood.org
Title
Control Recommendations
Body

Manual and mechanical control is difficult, due to the plants deep, tuberous roots. Use this method only for very small populations. All pieces of the tuber must carefully be removed or resprouting may occur. Follow-up monitoring is necessary because bulbils in the soil may germinate over several years.