Leafy spurge (Euphorbia esula L.) was accidentally introduced to the United States as a seed contaminant in imported grain during the early 1800s. It has since spread throughout much of the northern half of the nation. At present leafy spurge is not widespread in Missouri but does occur in at least two northern counties. Great Plains states northwest of Missouri report expanding populations of this weed, and there is every reason to believe that it will continue to spread in our area.

Leafy spurge can grow up to 3 feet in height. All parts of the plant bleed a milky sap that causes skin irritation. Seed capsules open explosively, dispersing seed up to 15 feet from the parent plant. Water and wildlife further spread the seed, which have high germination rates and can remain viable in the soil for at least 7 years.

If leafy spurge becomes well established in Missouri, it will probably threaten mesic to dry prairies. It is capable of invading disturbed and undisturbed sites, including prairies, savannas, pastures, abandoned fields, and roadsides. Forbs and native grasses can be completely displaced by leafy spurge in a few years if the infestation is left unchecked. 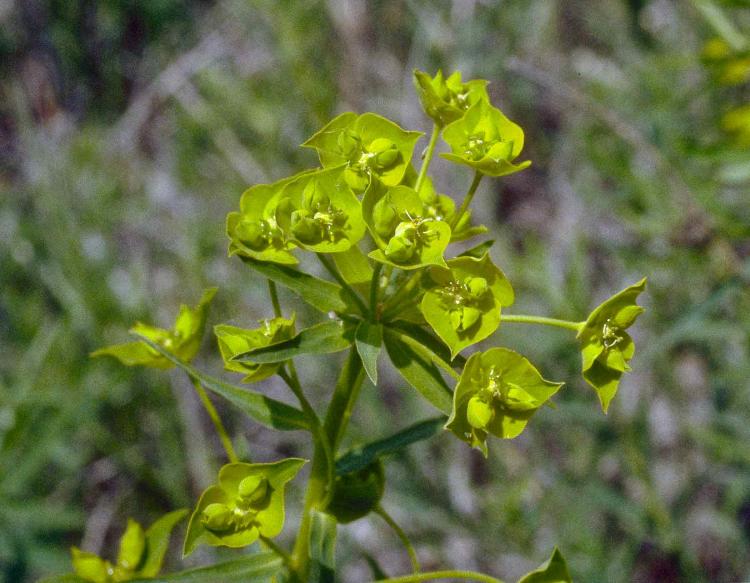 Most agree that the key to stopping this pest revolves around the ability to destroy its root system. The best way to inhibit this nuisance plant from becoming as destructive as purple loosestrife and multiflora rose is to recognize it as a pest now; treat the initial invading populations and prevent it from spreading any further. The sooner you attack leafy spurge—in its first year if possible—the better the chances of controlling it. All methods below may need to be repeated for 5 to 10 years.

Whatever the treatment, it is important to remember that leafy spurge cannot be controlled with a single herbicide application. At Devil's Tower National Monument in Wyoming, managers have been spraying on an annual basis for about 20 years and have significantly reduced but not eradicated leafy spurge populations.

Several chemicals have been used for leafy spurge control. These include picloram, 2,4-D, dicamba, and glyphosate.

Picloram is thought to be the most effective; but, due to its expense, it is often mixed with 2,4-D to treat large infestations. Picloram's residual activity in the soil may harm non-target species in natural communities. Biannual application of 2,4-D alone will probably prevent seed production and limit the spread of leafy spurge. It is unlikely to reduce the size of the original infestation, however.

For top-growth control, the herbicide 2,4-D amine can be sprayed on the foliage in a 25-percent solution (1 part 2,4-D in four parts water) twice a year. The most effective time to apply the herbicide is mid- to late June when the true flowers (not the bracts) begin to appear. The second spray application should be made early to mid-September when fall regrowth has begun but before a killing frost occurs.

The nonselective herbicide Roundup (a formulation of glyphosate), sprayed on leafy spurge foliage as a 33-percent solution (one part Roundup in three parts water), will provide 80- to 90-percent top control if applied between mid-August and mid-September. A follow-up treatment with a 25-percent solution of 2,4-D amine between mid-June and mid-July of the following year is necessary to control seedlings.

The herbicide should be applied while backing away from the areas to avoid walking through the wet herbicide.

By law, herbicides only may be applied according to label instructions.

Fire in conjunction with herbicides may be more effective than either method alone. Burning stimulates vegetative growth, making the plant more vulnerable to herbicides. Plants can be sprayed with 2,4-D in autumn (September) and burned the following spring (April). This should be followed by another 2,4-D treatment in June and a fall burn in October. The process may have to be repeated many times.

Biological control is being actively researched at many locations and since the 1960s several insects have been released in certain location, most notably the spurge hawk moth, Hyles euphorbiae. Biocontrol agents alone have not been effective so far in controlling spurge populations, but may become valuable if several different insects can be successfully used together or in conjunction with other control methods.

Grazing by goats has been used to control the spread of leafy spurge in pastureland, but the plant will probably resume its spread as soon as the grazers are removed. Cattle avoid grazing this plant.

Mowing or hand cutting is not completely effective because the root system remains undamaged and new sprouts will reappear rapidly. Also, mowing would have to be done continuously because it stimulates development of inflorescences on the lateral branches.

Hand-pulling, digging, or tilling is not completely effective because the entire root system must be excavated for complete control of leafy spurge. Pulling and digging can rip or cut the root into smaller pieces, leaving portions to resprout. This method could actually increase the number of plants.

Prescribed burning will not be likely to provide adequate control if used alone because its effect would be only on top growth and seeds. Established plants would quickly resprout.