Japanese honeysuckle (Lonicera japonica) is a perennial semi-evergreen vine native to Japan. First introduced in 1806 as an ornamental ground cover, it slowly escaped cultivation and became widely established by the early 1900s. It is found in numerous areas across Missouri.

Japanese honeysuckle spreads along the ground, forming dense mats. It climbs shrubs and trees and often dominates tree canopies. Fragrant white flowers bloom from May through June and develop into purplish-black fruits. Birds eat the fruits and distribute the seeds into fields and other areas. New vines also develop from underground rhizomes, and vegetative runners can sprout where the nodes (stem and leaf junctions) contact the soil.

This aggressive vine seriously alters or destroys the understory and herbaceous layers of the communities it invades, including prairies, barrens, glades, flatwoods, savannas, floodplains, and upland forests. It may become established in forested natural areas when openings are created from treefalls or when natural features allow a greater light intensity in the understory. Japanese honeysuckle also may alter understory bird populations in forest communities. 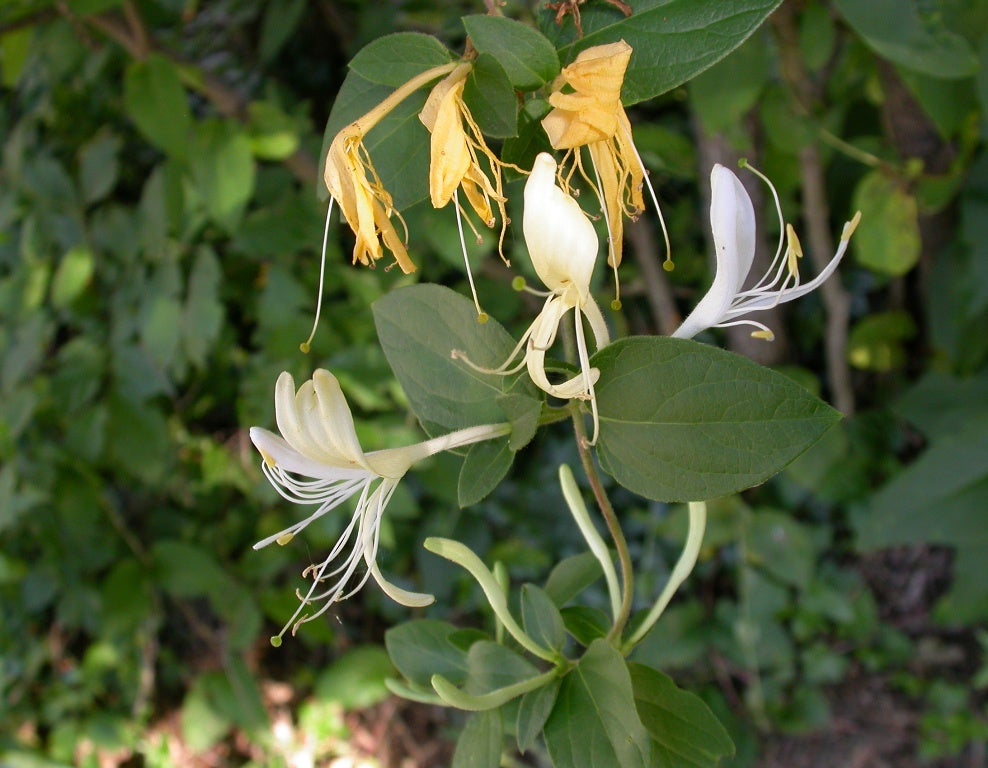 Is user submitted
Caption
You might enjoy its fragrance, but don’t kid yourself about this invasive, exotic vine — Japanese honeysuckle is an aggressive colonizer that shades out native plants and harms natural communities.
Credit
MDC staff
Title
Control Recommendations

Title
Control Practices in Areas of Heavy and Light Infestation

A previously burned population of honeysuckle will recover after several years if fire is excluded during this time. By reducing honeysuckle coverage with fire, refined herbicide treatments may be applied, if considered necessary, using less chemical.

Because Japanese honeysuckle is semi-evergreen, it will continue to photosynthesize after surrounding deciduous vegetation is dormant. This condition allows managers to detect the amount of infestation, and allows for treatment of the infestation with herbicides without damage to the dormant vegetation.

Glyphosate herbicide (tradename Roundup) is the recommended treatment for this honeysuckle. A 1.5- to 2-percent solution (2 to 2.6 ounces of Roundup/gallon water) applied as a spray to the foliage will effectively eradicate Japanese honeysuckle. The herbicide should be applied after surrounding vegetation has become dormant in autumn but before a hard freeze (25 degrees F).

Roundup should be applied carefully by hand sprayer, and spray coverage should be uniform and complete. Do not spray so heavily that the herbicide drips off the target species. Retreatment may be necessary for plants that are missed because of dense growth.

Although glyphosate is effective when used during the growing season, use at this time is not recommended in natural communities because of the potential harm to non-target plants. Foliar application of herbicides will be less effective prior to early summer (July 4) because early season shoot elongation will limit the transfer of chemical to the root system. Glyphosate is non-selective, so care should be taken to avoid contacting non-target species. Non-target plants will be important in recolonizing the site after Japanese honeysuckle is controlled.

Crossbow, a formulation of triclopyr and 2,4-D, is also a very effective herbicide that controls Japanese honeysuckle. Crossbow should be mixed according to label instructions for foliar application and applied as a foliar spray. It may be applied at dormant periods, like glyphosate, and precautions given above for glyphosate should be followed when using Crossbow.

Either herbicide should be applied while backing away from the treated area to avoid walking through the wet herbicide. Garlon 3A and Garlon 4 (triclopyr) are also effective in foliar applications. By law, herbicides may only be applied according to label instructions and by licensed herbicide applicators or operators when working on public properties.

Mechanical cutting of aerial vines, followed by cut-surface herbicide treatment can be effective and minimizes the risk of spray drift. Undiluted Garlon 4 or a 20-percent solution of Roundup should be applied to cut stems immediately following cutting. (Note: some products containing glyphosate or another herbicide may be pre-diluted, so be sure to read product labels to understand herbicide concentration levels).

In fire-adapted communities, periodic spring burning should control this species.

Mowing limits the length of Japanese honeysuckle vines, but will increase the number of stems produced.

Grazing may have the same effects as mowing, but is less predictable due to uneven treatment given by browsing animals.

Herbicides that have given poor control results or that are more persistent in the environment than other types are picloram, annitrole, aminotriazole, atrazine, dicamba, dicamba 2,4-D, 2,4-D, DPX 5648, fenac, fenuron, simazine triclopyr.