Callery pear (Pyrus calleryana) is a deciduous tree, more commonly known as “Bradford pear.” It is native to China and was brought to the United States in 1917 for hybridization with fruiting pears to improve disease resistance.

The Bradford cultivar was widely planted as a promising new ornamental during the 1950s. Since then, many other cultivars were developed. Individual cultivars are considered self-sterile but different cultivars planted near each other can cross-pollinate and produce fruits and viable seed. These hybrid trees are spread when the fruit is eaten and distributed by birds and other animals.

Callery pear grows rapidly and is adapted to a wide variety of environmental conditions. It has spread along power lines and rights of way; in fields, parks, and other natural open areas; and in the understory of forests and woodlands.

A single wild tree can spread quickly by seed and vegetative means, often forming dense thickets within several years and outcompeting native plants. In forested settings, it leafs out earlier than our native trees, effectively shading out spring wildflowers. 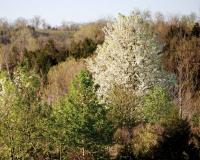 In areas with light infestation, remove small trees by hand when the soil is moist, with care taken to remove the entire root. When too numerous, foliar spraying with a 2 to 5 percent systemic herbicide solution of glyphosate or triclopyr can be utilized in mid to late summer.

Medium to large trees should be cut down and stumps treated immediately with herbicide to prevent re-sprouting. Effective herbicides include glyphosate and triclopyr at a 25 to 50 percent solution.

Instead of landscaping with Callery pear, we recommend planting a variety of other small trees, especially natives, such as: