A deep-rooted perennial. Leaves are bluish-green and usually alternate, except those immediately beneath the flowers, which are whorled. Two kinds of leaves appear on the stem: leaves on the lower half of the stem are scalelike, while those on the upper parts are linear to oblong. All parts of the plant bleed a milky sap, which causes skin irritation. Foliage on early spring seedlings may be deep red or purplish. Blooms May through October. Flowers are borne in umbels and appear greenish yellow. Each umbel supports 7–10 groups of tiny, inconspicuous flowers, subtended by 4 crescent glands and 2 conspicuous, greenish-yellow bracts. 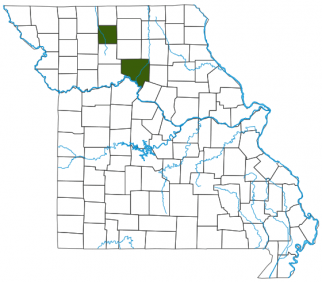 Currently documented in Grundy and Chariton counties, but probably more widespread in northern Missouri than that.

Leafy spurge is adapted to a wide range of soil moisture conditions from moist to dry. However, it is especially aggressive in very dry situations where competition from native species is less intense. Areas most sensitive to leafy spurge infestation include pastures, roadsides, abandoned fields, railroad ballasts, disturbed and undisturbed moist to dry prairies, and possibly open natural communities such as savannas. It is not a common invader of tilled cropland sites.

Invasive. Native to Europe and Asia, leafy spurge is now found throughout the world, except for Australia. It was probably introduced into our country as a contaminant in imported grain. Since then, the plant has become a serious management problem, particularly for the north and central plains states. States with the greatest infestations include Colorado, Idaho, Minnesota, Montana, Nebraska, North Dakota, Oregon, South Dakota, Wisconsin, and Wyoming.

Leafy spurge emerges in early spring when it’s still around freezing. The stems grow rapidly and, if the plant is over a year old, flowers may appear in May. After 4-6 weeks, each stalk may produce and disperse more than 200 seeds with a germination rate up to 80 percent. The plant can also reproduce vegetatively from crown buds. But the key reproductive capability is its extensive root system, which may penetrate to a depth of 12 feet. To eradicate the plant, you must destroy the roots.

Leafy spurge has milky white sap that can flow from any part of the plant following injury. This sap may cause severe irritation to human skin and is reported to cause blistering and hair loss on the legs of horses in heavily infested pastures.

If leafy spurge becomes well established in Missouri, it will likely threaten mesic to dry prairies. Forbs and native grasses can be completely displaced by leafy spurge in a few years if the infestation is left unchecked. 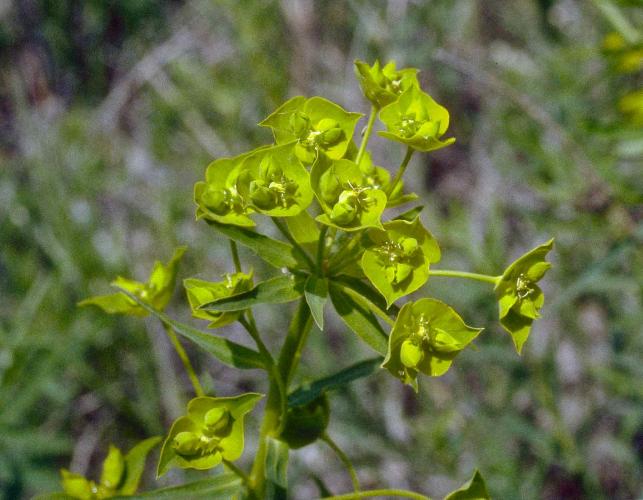 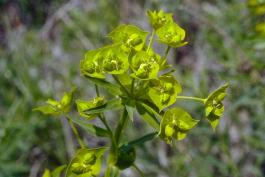