Algae are simple aquatic plants common to virtually all Missouri waters. Unlike other plants, algae lack true stems, leaves, and roots. Algae are a basic component of a complex aquatic food web, converting the sun’s energy into a form useful to other aquatic life. During this process, algae also produce oxygen, which accounts for more than 50 percent of the oxygen in our atmosphere. Algae occur in three basic forms: planktonic, filamentous, and macrophytic.

Planktonic algae are single-celled, microscopic plants that float freely in the water. When these plants are extremely abundant or “bloom,” they turn pond water green. Sometimes, they can turn the water other colors, including yellow, gray, brown, or red. 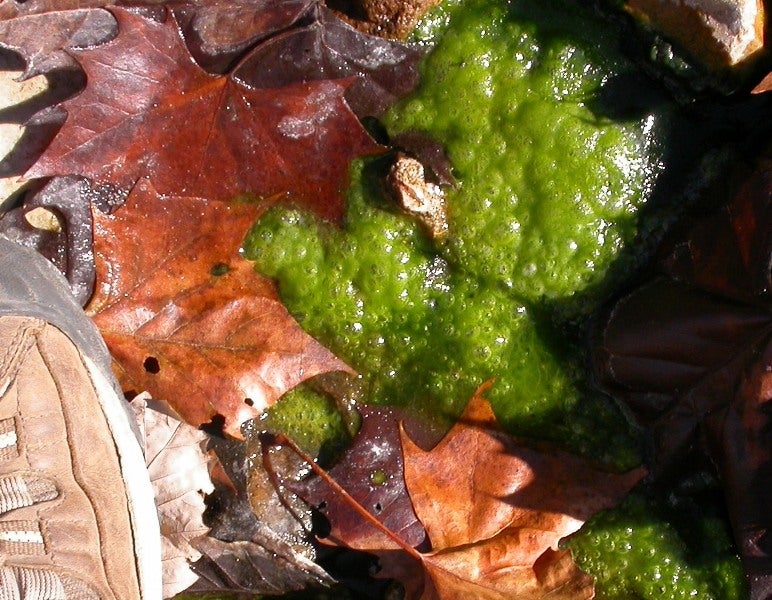 Is user submitted
Caption
Green algae is vital for healthy aquatic ecosystems. As the base for aquatic food chains, it feeds and shelters tiny animals, insects, and young fish. Wasps and other insects used this patch as a little platform on which to alight in order to drink water.
Body

Filamentous algae occur as fine green threads and form floating mats that move around the pond when windy. This type of algae is also commonly found attached to rocks, submerged trees, other aquatic plants, and boat docks. Filamentous algae are sometimes referred to as “pond moss” or “pond scum.”

Macrophytic algae resemble true plants because they attach to the bottom and form stems and leaves. The most common macrophytic algae in Missouri is called chara or muskgrass (due to its strong musky odor). Chara feels coarse to the touch because of lime (calcium carbonate) deposits on its surface, earning it another common name—stonewort.

Like many things that benefit us, too much algae can be a problem. Excessive blooms of planktonic algae can cause taste and odor problems in drinking water and sometimes even fish kills. Filamentous algae and macrophytic algae often form dense growths that make fishing, swimming, and other recreational uses nearly impossible. Total coverage can restrict sunlight penetration and limit the production of oxygen and food items necessary for good fish growth.

Sometimes certain types of algae called blue-green algae or cyanobacteria can produce toxins that can cause illness in humans and even death in animals. When algae abundance interferes with the intended use of the pond, a control method should be considered.

Algae problems are usually caused by an overabundance of nutrients (nitrogen and phosphorous) in the pond. From the moment a pond is built, it becomes a settling basin for nutrients washing in from the land that drains into it (the pond’s watershed). The older a pond gets, the more nutrients it has accumulated and the more susceptible it is to algae problems. Runoff from fertilized fields, lawns, pastures, feedlots, septic tanks, and leach fields accelerate nutrient loading and algae growth in the pond. If the pond is old and has become shallow due to accumulation of black muck on the bottom, consider draining, drying, and deepening the pond. Remove the excavated material from the pond’s watershed.

Prevent excessive algae growth before it happens through proper planning of your pond. Since most algae problems are caused by excessive nutrients, preventing these nutrients from entering the pond is the best way to keep your pond healthy. Avoid yard fertilizers that contain phosphorus in areas that drain into ponds to reduce the potential for nuisance plant growth. Fencing livestock from the pond’s edge and watering them from a tank below the dam is also a helpful protective measure.

If eliminating excess nutrients is not feasible, there are three ways to filter nutrients from runoff water.

A well-constructed lake or pond with adequate depth, a properly managed watershed, and a diverse aquatic plant community covering 30–40 percent of the pond shoreline will have fewer problems with nuisance algae than shallow ponds that lack rooted aquatic plants.

For more information on these and other watershed and agriculture practices, talk to your local Natural Resource Conservation Service office.

Mechanical control means removing the vegetation by hand. Mats of filamentous algae may be removed with a rake, seine, or wire screen. However, this control method is very labor intensive and provides only temporary control. In some instances, the algae may seem to grow as fast as it is pulled out. Mechanical control is practical when used in conjunction with chemical control methods, or as a maintenance treatment around swimming or fishing areas for an occasional special event.

Algae removed from the pond should be deposited below the pond’s dam to ensure that nutrients tied up in the vegetation do not re-enter the pond. Algal surface scums can sometimes be controlled with a water pump that circulates the top layer of water in the pond. For more information on the appropriate use of surface water pumps, contact your regional MDC fisheries management personnel.

Biological control means using animals, insects, or diseases to reduce the amount of nuisance plant coverage. Grass carp do not provide effective biological control of filamentous algae in fishing ponds. While very high densities of small grass carp have reduced filamentous algae in fish hatchery ponds that contain no rooted plants, these fish will switch to other plants (if available) once the fish grow larger than 5 inches. Stocking 3–5 inch grass carp into ponds with established largemouth bass could result in the grass carp being eaten by the bass before they have the chance to grow. Large stockings of grass carp in fishing ponds could eventually eliminate all beneficial rooted plants. This can actually encourage filamentous and planktonic algae growth by releasing nutrients from rooted plants after they are digested.

Before using chemicals, you should consider potential contamination of domestic water supplies and the waiting periods for watering livestock, eating fish, swimming and irrigation. Algae control with chemicals works best when the water temperature is above 60 degrees Fahrenheit and algae mats are broken up while the chemical is being applied.

To avoid oxygen depletion and a possible fish kill, avoid treating when the water temperature is above 80 degrees Fahrenheit and treat only 1/4 to 1/3 of the vegetation at a time.

Allow 10–14 days between consecutive treatments. Chemicals do not provide permanent control, so repeated treatments are usually necessary to keep algae at desired levels. Please remember that the long term effects of most herbicides on the environment are not well known.

The department recommends Cutrine Plus (Liquid), Cutrine Plus (Granular), and Copper Sulfate for planktonic algae, filamentous algae, and macrophytic algae. Although these chemicals are recommended by MDC personnel and have proven reliable, other chemicals may be suitable for aquatic weed control. Local farm and garden supply stores often carry these herbicides.

Download the Aquaguide below for additional information on chemical recommendations and determining the amount of herbicide needed. For more information, contact your local MDC office.