Smooth sumac is native to Missouri. It occurs in most of the United States and into southern Canada. This sometimes aggressive shrub grows in clumps or colonies and spreads by seeds and rootstocks. It sprouts easily and grows rapidly. Aboveground stems are relatively short-lived while roots persist and form new stems.

Smooth sumac is known to shade and replace prairie plants and endangered species. It is one of the primary native woody nuisances that moves into prairies in Missouri, where its dense colonies eliminate other native species. 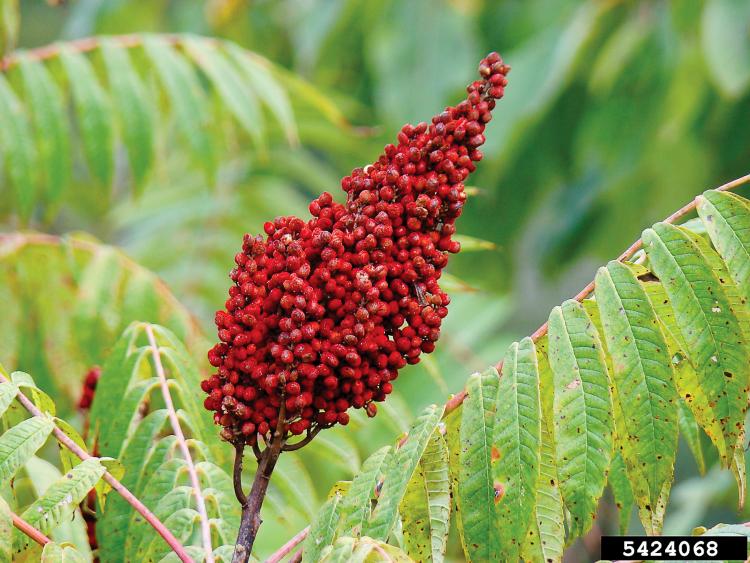 The control procedures recommended above for high quality natural communities are also applicable to buffer and severely disturbed sites. In addition, foliar applications of Garlon 3A (a selective translocated herbicide that is a formulation of triclopyr) or 1 to 2 percent Roundup applied according to label instructions also are effective.

If herbicides are used, great care should be taken to avoid contacting non-target plants with the herbicide. In addition, do not spray so heavily that herbicide drips off the target species. The herbicide should be applied while backing away from the treated area to avoid walking through the wet herbicide.

Large smooth sumac colonies should not be allowed to develop next to naturally open communities.

Managers first must decide what part of the population should be removed. In general, sumac should be left in ravines and draws within prairie communities. It should not be eliminated totally from communities where it is a natural component, but should be controlled where it has invaded or spread to the detriment of other native vegetation.

Stems should be cut with an axe, lopper or harp blade in July or shortly after flowering. Sprouts then should be cut in August. Spot-treating cut stumps with Roundup (a formulation of glyphosate) will minimize resprouting.

The herbicide applicator must be extremely careful not to contact non-target species with Roundup since this herbicide is nonselective and will kill most photosynthetically active plants when applied in July or August. Using a herbicide wick bar or wick tool is another way of applying nonselective herbicides in a controlled manner to minimize or eliminate application to non-target species. By law, herbicides may only be applied as per label instructions.  (Note: some products containing glyphosate or another herbicide may be pre-diluted, so be sure to read product labels to understand herbicide concentration levels).

Where fire will carry through a stand, burning in August will often kill mature plants, but sprouts must be cut. In glades and prairies, an occasional August burn should be sufficient.

For maintenance control, edge individuals that provide the source of young plants invading high-quality prairie or glade communities should be cut and the stumps spot-treated with Roundup, as described above. An occasional August fire should be sufficient to keep the sumac population in check. Midsummer (July or August) mowing or cutting of sumac can reduce its vigor.

The following practices should be avoided: