Osage orange is a medium-sized tree with a short trunk, dense, round, or irregular crown, milky sap, and stout thorns. Osage orange was introduced to Missouri long ago for use as hedgerows and windbreaks — hence the common name hedge apple. Biologists believe that the large fruits evolved to be eaten and dispersed by the large herbivores, such as mastodons, which lived on our continent only 20,000–30,000 years ago. Today, not many animals eat the sticky fruits, and the seeds often end up right where they fell.

Osage orange is a native species that can become a nuisance in prairies and savannas. It also invades forest communities, usually as a result of past disturbance, such as grazing. 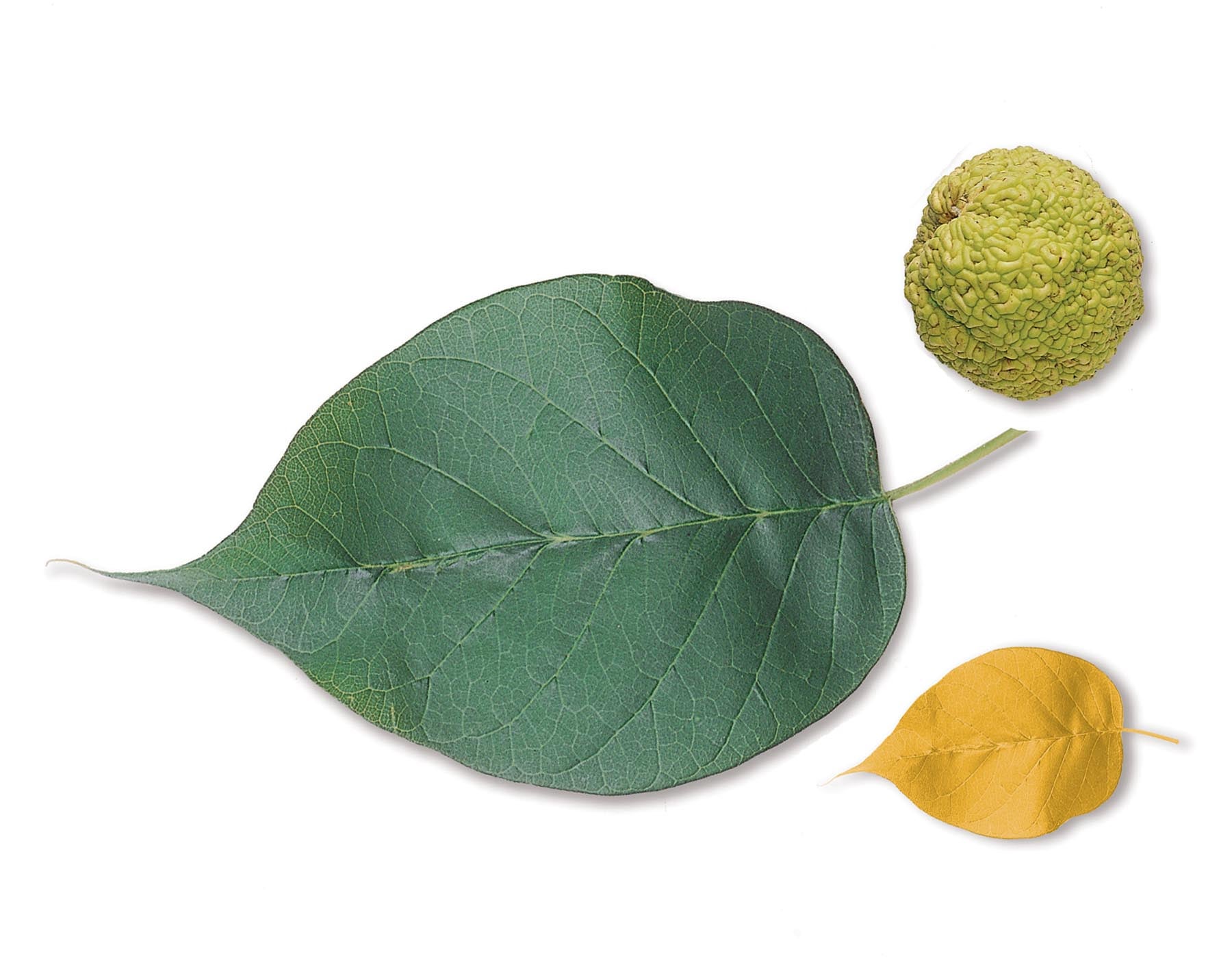 Cutting and/or burning offer the best solutions for control.

Cutting during summer months (June–August) should provide the best results, and two cuttings in one year are more effective than one. Summer cutting affects the plant when its root reserves are low and the possibility of adverse weather during the fall and winter may further harm the plants. Repeated cutting may be necessary to control Osage orange completely because it resprouts from the stump and by root suckers, and may cover large areas vegetatively. Cutting is most feasible with smaller plants.

Although girdling has not been tried as yet on Osage orange, it may prove successful on smaller trees that do not have thick bark. Older trees have quite thick bark, making girdling difficult.

For girdling, the phloem should be removed without damaging the xylem. The xylem should be left to continue to conduct root reserves into the crown, thereby diminishing the capacity of the tree to resprout. The girdles should be checked every several weeks at first to make sure that bark does not develop over the cut area.

Girdling can be done with an ax, saw, or chainsaw. Two parallel cuts 3 to 4 inches apart, cutting through the bark slightly deeper than the cambium, are needed. The bark is knocked off using a blunt object like the head of an ax.

Periodic prescribed burning will help keep young Osage orange plants from becoming established. Burning in conjunction with cutting works well on small plants. Large Osage orange trees are resistant to fire and will need another control method such as girdling or cutting.

All cutting or girdling practices, without herbicide treatment, will result initially in the development of masses of vigorous sprouts which are extremely difficult and hazardous to handle due to their axillary spines. The tips of these spines are brittle and may remain embedded when the spines are extracted from puncture wounds. Workers should take extra precautions to protect their eyes, hands, arms, knees, and feet when handling these sprouts. A cut-surface treatment with herbicide, as described below, is recommended to minimize sprouting.

Same as given above for heavily infested areas in natural communities except that labor-saving herbicides discussed below may be used when manpower is limited.

Triclopyr herbicide (trade name Garlon 4 or 3A) is effective as a bark treatment or cut-surface treatment. Undiluted Garlon 4 can be applied in a thin stream to all sides of the stem, 6 inches above the base of the plant. This only works on trees with stems less than 6 inches in diameter. A narrow band of Garlon 4 encircling the stem is needed for control. This method should not be used in high-quality natural areas because vegetation around the tree may be killed.

Cut-surface treatment with Garlon 3A, a selective translocated herbicide, effectively controls Osage orange. A diluted solution of Garlon 3A (50-percent solution in water) can be sprayed on cut surfaces or else wiped on the cut surface using a sponge applicator. Either a stump or girdle can be used for the cut surface. Girdles can be made rapidly using a chain saw. Application should be as soon as possible, and no later than two to three hours after cutting. Cut-surface application can be made during any season of the year, but application during the dormant season reduces the potential for injury to other plants due to drift.

Basal bark treatment with Garlon 4 also is effective. Two or 2 1/2 ounces of Garlon 4 is added to 1 gallon of diesel fuel. This mixture is sprayed, using a hand sprayer, to the basal portion of the tree trunk. Spray to a height of 12 to 15 inches (30.5 to 38.1 cm). Thorough spraying is necessary. Tis method should only be used in less sensitive areas because runoff of diesel fuel and herbicide may harm nearby plants.

Use of Triclopyr is best done in the dormant season to lessen damage to non-target plants.

By law, herbicides only may be applied as per label directions.

Same as given above for heavily infested areas. Periodic prescribed burning controls seedlings and saplings.

Burning or chipping also will be required to reduce the thorny debris following cutting, since the spines as well as the heartwood are very decay resistant.

No biological controls are known that are feasible in natural areas.