NOTE: Although the following guideline is written for black locust, the control methods will also be effective for honey locust (Gleditsia triacanthos L.). Honey locust can be controlled more easily than black locust using the methods outlined below because it does not readily form root sprouts. 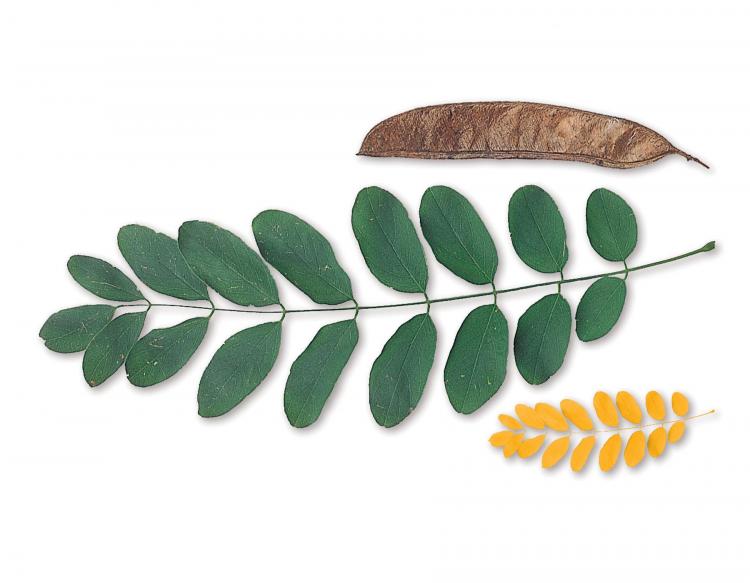 Dozing may be practical consideration on some sites. A black locust of 300 plants was established in 1963 at the Elsberry Plant Materials Center near Elsberry, Missouri. Removal of the mature stand occurred in about 1987. Bulldozing, piling, and burning of trees followed by cultivation and planting of soybeans effectively eliminated root sprouts and seed germination. Monitor dozed sites for sprouting from roots or seed germination and follow-up with mechanical or chemical treatment. Roundup, Krenite or Garlon may be used to treat any sprouts that appear.

Black locust is difficult to control due to its rapid growth and clonal spread. Mowing and burning largely have proven only temporarily effective due to the tree's ability to spread vegetatively. As a result, management has concentrated on chemical control with variable success. Whatever control measure is adopted, a follow-up treatment is usually necessary.

Spread of black locust can be hindered by repeated cutting during the growing season. All stems should be cut, and new stems that appear subsequently should also be removed in the same growing season. This treatment will probably need to be repeated for several years to achieve adequate control. Annual haying may be adequate to control first year seedlings and prevent spreading in prairie communities.

Best success with herbicides has resulted from basal bark application of herbicides to live standing trees. This should be done when trees are small and thin-barked (6 inches or less DBH). It is not as effective on larger trees. This method minimizes re-sprouting from roots and stumps when applied between mid-July and the end of December. Remedy (a formulation of triclopyr) is recommended at a 2-percent solution in diesel fuel. Spray basal part of brush or trees to a height of 15 to 20 inches above the ground. Thoroughly wet all basal bark areas, including crown buds and ground sprouts. A thorough spraying that includes spraying until run-off at the ground line is noticed is necessary to hinder re-sprouting. Applications in periods of dry weather will aid in root control.

Basal bark treatment with Garlon 4 (triclopyr) can also be effective, although re-sprouting has occurred in at least one instance with this treatment. Two to two and one-half oz. of Garlon 4 is added to one gallon of diesel fuel. Follow same directions as with Remedy. Great care should be exercised to avoid getting any of the mixtures on the ground near the target plant since some non-target species may be harmed. Diesel fuel may kill vegetation around the target tree. Avoid using triclopyr if rain is forecast for the following one to four days; otherwise runoff will harm non-target species.

Pelleted herbicides are discouraged because leaching could occur, affecting native woody plants. A variety of sprays are available for foliage or cut stump treatment, but these methods will probably require more follow-up treatments than the basal bark applications. Krenite (a formulation of forsamine ammonium) is a non-volatile, contact, brush herbicide, applied as a spray to leaves usually during the two-month period before fall coloration. Krenite should be applied only in July through September. Thorough coverage with a soft water carrier is required and a nonionic surfactant will improve results. A 1-percent solution applied as a foliar spray is effective. Krenite inhibits bud expansion in the spring, and control effects are not seen until the following spring. Slight regrowth may occur the following season but saplings will die during summer. Follow label recommendations to obtain best results; minimize drift. Care should be taken to avoid contacting non-target species.

Garlon 3A (a formulation of triclopyr) is a selective translocated herbicide that can be applied as a foliar or cut-surface treatment. Cut-surface treatment provides a high level of control of tree root systems, especially for suckering species such as black locust. Cut-surface application can be made during any season of the year, but application during the dormant season reduces the potential for drift injury. Undiluted or diluted Garlon 3A at a rate of 50-percent water can either be sprayed on the cut surface using a hand sprayer or else wiped on the cut surface using a sponge applicator (sponge-type paint applicators can be used). Either a stump or a girdle can be used for the cut surface. Girdles around the stem can be made quickly, using a chainsaw. Application should be within a few hours of cutting, adhering closely to label precautions and directions.

Crossbow may be sprayed on cut stumps at a 1-percent or 1.5-percent rate in the early fall, well before freezing. This kills small saplings, however suckering, partial greenup of treated trees and germination of seed may continue for a couple of years.

Glyphosate (trade name Roundup) can be foliar-sprayed on black locust leaves as a control when trees are actively growing. For good control, all leaves on all shoots should be treated. Roundup should be applied by hand sprayer at a 0.5- to 1.5-percent solution (0.6 to 2 ounces of Roundup per gallon of clean water). Spray coverage should be uniform and complete. Do not spray so heavily that herbicide drips off the target species.

Black locust stems can be cut at the base with brush-cutters, chainsaws or hand tools, followed by treating the stump with a 20-percent solution of Roundup. While the Roundup label recommends a 50- to 100-percent concentration of herbicide for stump treatment, a 20-percent concentration has proven effective. The herbicide should be applied either by spraying individual stumps using a hand held sprayer or by wiping each stump with a sponge applicator. Treatment should occur immediately after cutting for best results. Application in late summer, early fall or the dormant season has proven effective.

Any herbicide should be applied while backing away from the treated area to avoid walking through the wet herbicide. By law, herbicides only may be applied according to label directions. As mentioned earlier, follow-up treatments are usually necessary because of black locust's prolific sprouting and rapid growth.

The locust borer, Megacylline robinine, can cause serious injury and disfigurement to black locust. However, no information is available on the use of the borer as a control method.

Tordon RTU (picloram) is a premixed general use herbicide labeled for cut-surface applications only. This herbicide kills treated black locust stems, but vigorous sprouts develop from roots. Stump treatments that do not effectively control the tree's root system may necessitate several additional years of foliar treatment of root sprouts. Tordon RTU has high soil mobility and persistence, and is no longer labeled for use on sandy soils.

Girdling kills the black locust stem that is girdled, but it does not prevent the formation of suckers.