The mountain madtom is rare and endangered in Missouri. This small catfish has been recorded from only a few locations in the southeastern quarter of the state.

The mountain madtom can be distinguished from our other madtoms by the following: The dark bar at the base of the adipose fin does not extend to near the fin margin. The pectoral spine has small, sawlike teeth well-developed along the front margin. The body and fins are profusely mottled with brownish blotches and bars. The upper jaw projects beyond the lower jaw. There is no dark bar across the middle of the tail fin, and no dark line across the base of the tail fin. The head length goes fewer than 3.5 times into the standard length.

Similar species: The brindled and Neosho madtoms are most similar. 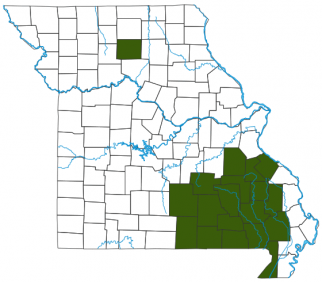 Recorded in our state from only a few locations in the southeastern quarter: the Black River near Poplar Bluff, the St. Francis River near Sam Baker State Park, and the Current River near the Arkansas state line.

You are unlikely to come across the mountain madtom in Missouri. It has a very limited distribution in our state. It has only been collected at four locations in southeast Missouri, including 18 specimens collected from the Black and St. Francis rivers, and the Current River near the Arkansas state line.

In Missouri the mountain madtom is known only from large, moderately clear rivers in or near the transition zone between Ozark and Lowland regions. It occurs in gravelly riffles, sometimes where there are thick growths of aquatic vegetation. It typically hides under flat rocks during the day.

It is sensitive to siltation and does not live in places with muddy or sandy substrate. The eggs, in particular, are sensitive to silt: when silt settles on mountain madtom eggs, the eggs will suffocate. Farming, logging, and other soil disturbances can cause increased amounts of silt to enter streams and thus degrade the aquatic habitats this species requires.

Because this species requires streams with fast-flowing water, dam construction has reduced the amount of potential habitat.

Mountain madtoms feed intensely, in relatively short bursts, only at night, and mostly during the first four hours after sunset. They forage among rocks and rooted vegetation, chiefly in riffle areas, for immature aquatic insects, including mayflies, caddisflies, stoneflies, and various members of the family of true flies.

State Endangered; a Species of Conservation Concern in Missouri. This fish is more common east of the Mississippi River. Habitat degradation resulting from human land use near streams jeopardizes the populations in our state. Siltation, sedimentation, and pollutants seeping from nearby lands degrade the aquatic habitat mountain madtoms require.

In our state, mountain madtoms probably spawn in May and June, depositing eggs beneath rocks in shallow, shaded pools having a floor of clean-swept fine gravel. As with most catfish, there is parental care: males guard the eggs and continue to watch over the larvae for a few days after hatching. Mountain madtoms can live for up to 4 or 5 years, with males living longer and attaining greater lengths than females.

Missourians can be proud of our state for many reasons. One bragging point we have over most of the neighboring states is the richness of our fish community, including rare types like this madtom. There are more than 200 kinds of fish in our state. Kansas, for example, only has about 140.

Although most of Missouri’s species of madtoms may be collected and kept as aquarium fish (if you have a valid Missouri fishing permit; see the Wildlife Code of Missouri for details), you cannot collect or possess endangered or threatened species, including the mountain madtom and Neosho madtom.

The two parts of the scientific name are somewhat contradictory. The genus name, Noturus, means “back tail” and refers to the connection between the adipose fin and the tail that characterizes the madtoms as a group. But the species name, eleutherus, means “free” and refers to the almost complete separation of the same two fins in this particular species.

Like many fish of its size, this madtom plays an intermediate role in the food chain: It preys on smaller creatures but is preyed upon by larger animals. Like other madtoms, this species has a mild venom in its pectoral and dorsal spines that helps protect it from predation.

Non-point-source pollution is an important concept to understand. It’s easy to see how dumping a pollutant right into a stream can degrade water quality, but it’s a little harder to grasp how oil, detergent, salt, fertilizer, or pesticide applied to land that seems far from a stream is ultimately washed into our waterways. It’s also harder to see how construction or other soil disturbance on “dry land” can lead to siltation in nearby streams. Fortunately, people can learn these principles and take care to prevent our streams from being degraded. 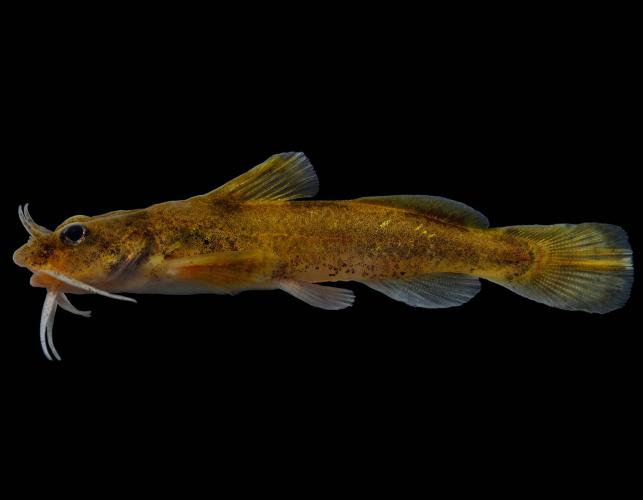 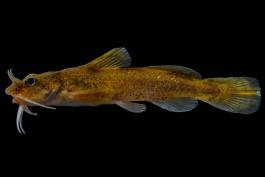