The freckled madtom looks similar to the tadpole madtom and shares much of its range, but its upper jaw projects beyond the lower jaw, and the underside of the head and body are sprinkled with dark speckles.

The freckled madtom can be distinguished by the following characters:

Like the tadpole madtom, the freckled madtom has back and sides uniformly light tan or chocolate brown and the belly white or pale yellow. The fins are similar in color to nearby parts of the body. The major difference in coloration is the freckled madtom’s dark speckles.

Similar species: Missouri has three other madtoms whose bodies are rather uniformly colored and lack distinct dark blotches, bars, or saddle marks: The slender and tadpole madtoms (N. exilis and N. gyrinus), and the stonecat (N. flavus). The slender and tadpole madtoms have the upper and lower jaws about equal (the upper jaw does not overhang the lower jaw). The stonecat shares with the freckled madtom the “overbite,” but it has backward extensions on the teeth pad of the upper jaw, plus its lower lip and chin lack dark pigment.

Size
Adult length: commonly 2–3½ inches; maximum to about 4½ inches.
Where To Find
Scattered widely in the eastern half of Missouri and in the central portion of western Missouri.

The distribution of the freckled madtom is similar to that of the tadpole madtom (southeast Missouri, and the creeks and backwaters of the Missouri and Mississippi rivers), but it unlike the tadpole madtom it is typically found in riffles or in portions of the stream that have gravel or rocky bottoms.

The freckled madtom occurs widely in the Bootheel lowlands and nearby sections of the Ozarks, as well as the prairie streams of central and northeastern Missouri. It is seldom found in large numbers. The most substantial populations are in the upper Osage and Marmaton rivers, the upper Mississippi River, and in a few dictions of the southeastern lowlands.

This madtom is primarily an inhabitant of large, clear to moderately turbid rivers having permanent strong flow and low or moderate gradients. It occurs on riffles over bottoms of sand and gravel, often mixed with considerable quantities of detritus.

Life Cycle
Spawning at the latitude of Missouri apparently occurs from mid-June to late July. Unlike other madtoms, breeding adults of the freckled madtom develop numerous tiny, white abrasive structures over their heads and bodies that are analogous to the breeding tubercles of minnows and suckers. Males guard the nests, which are sometimes created in discarded beer cans. Females become mature in their second summer of life, while males mature in their third summer. Maximum life span is at least 4½ years.

By feeding on immature midges and mayflies, this madtom serves as a check on the populations of those insects. The presence of stout, venomous spines reminds us that many animals seek out the freckled madtom as prey. 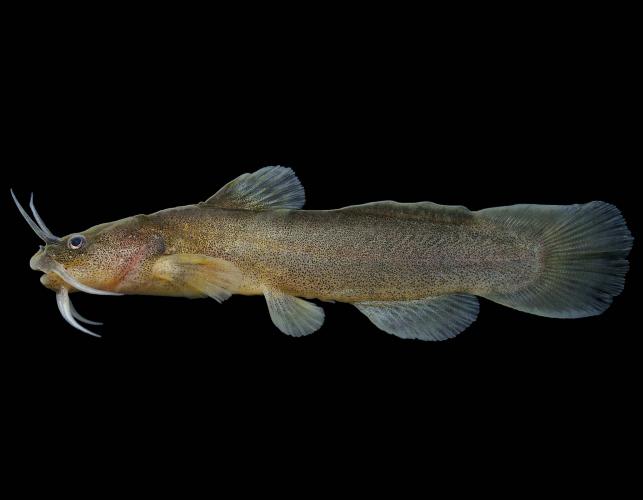 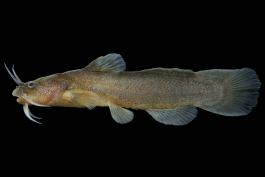