The Ozark madtom is abundant where it occurs, in the White River system of the Ozarks of southern Missouri and northern Arkansas. The back and fins are distinctly mottled with dark blotches and bars. It is identical to the Black River madtom, which occurs in the Black and St. Francis rivers.

The Ozark madtom is identical to the Black River madtom. Both have the pectoral spine with prominent sawlike teeth along the rear margin; the upper jaw projects well beyond the lower jaw; the tooth pad on the upper jaw lacks backward extensions.

The body and fins are rather distinctly mottled with dark blotches and bars: The dark bar beneath the adipose fin usually does not reach upward to the margin of the fin. There is no broad dark bar across the base of the tail fin. The dorsal fin lacks a dark blotch toward the outer margin. The head length (from tip of snout/lips to the back edge of gills) goes more than 3.5 times into the standard length (tip of snout/lips to base of tail). The distance from the tip of the tail fin to the notch between the tail fin and adipose fin goes more than 2 times into the distance from the notch forward to the front of the dorsal fin base.

The back is light brown with 4 indistinct dark crossbars. The sides are similarly colored, with faint dark mottlings. The belly is pale yellow or creamy white. The fins are pale yellowish white with indistinct dark blotches and bars.

Similar species: A newly discovered madtom species, the Black River madtom (N. mayden) used to be considered the same as the Ozark madtom. Indeed, they look just alike. Using naked-eye characteristics, it is impossible to tell the difference between them. They are, however, quite different genetically and in numbers of chromosomes — so different that in 2006 biologists declared them separate species. These two “cryptic species,” however, occur in separate river systems, meaning that you can ID them by geography: The Ozark madtom occurs in the upper White River system, while the Black River madtom occurs in the Black and St. Francis rivers.

Size
Adult length: commonly 2½–4 inches; maximum about 5 inches.
Where To Find
Endemic to the Ozark region of southern Missouri and northern Arkansas, in the upper White River system. Formerly, this species was thought to have a wider range, but since the Black River madtom was split away as a separate species, its range (to the east) has been removed from the official range of the Ozark madtom.

Compared to our other catfishes, madtoms as a group are relatively unfamiliar to most people. They are small and secretive, and they are rarely seen unless someone is making a special effort to capture them.

A characteristic madtom of Missouri’s southwestern Ozark streams. Where it occurs, the Ozark madtom is one of the most abundant species of madtoms. It avoids headwater creeks, reaching its greatest abundance in medium-sized to moderately large Ozark streams. It inhabits the riffles and rocky pools of clear, high-gradient streams having permanent, strong flow. It does not thrive in streams kept continuously cool by inflow from large springs.

During daytime, the Ozark madtom hides beneath coarse gravel and rocks. At night, it emerges to forage over the bottom in riffles and shallow gravelly pools.

Ozark madtoms forage over the bottom of streambeds at night, using their highly sensitive barbels to locate food items by taste and touch. Immature midge flies and mayflies are favorite foods, along with lesser quantities of other aquatic insects, worms, as well as seeds.

Life Cycle
Breeding males have enlarged head muscles and swollen lips. Males construct nest cavities under flat rocks in riffles, raceways, or shallow pools with current. Nests with eggs and recently hatched fry appear in Ozark streams in late June and early July, and females may still hold fully developed eggs in late July. Males guard the nests, attending the eggs and fry for at least two days after hatching. They do not feed during this time. The life span may be 3 years or more.

By feeding on immature midges and mayflies, the Ozark madtom serves as a check on the populations of those insects. The presence of stout, sawtoothed, venomous spines reminds us that many animals seek out the Ozark madtom as prey. 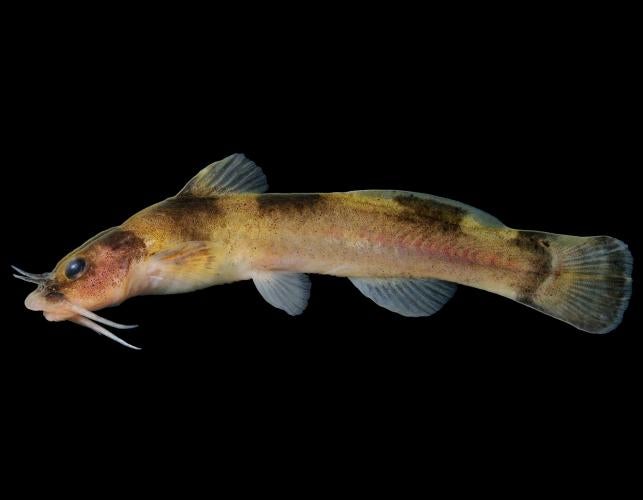 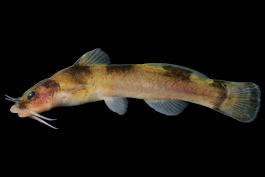