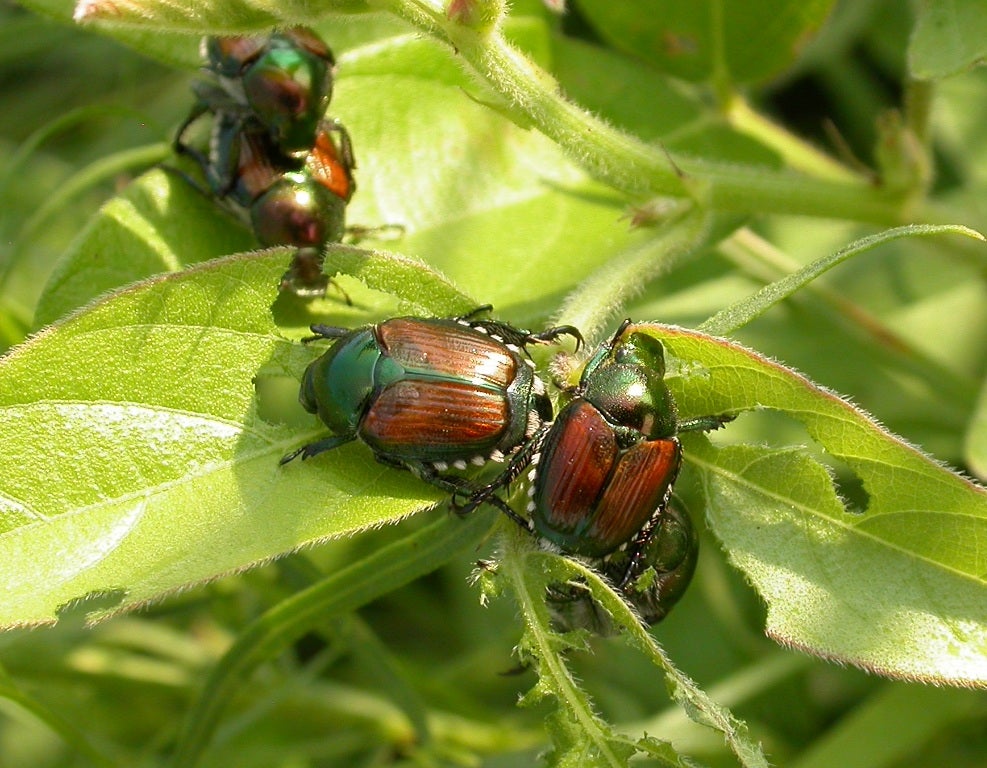 Is user submitted
Caption
Japanese beetles often feed in groups of up to 25 on a wide variety of plants. Adult Japanese beetles appear around the middle of June, and they live for about two months.
Right to Use
Body

Japanese beetles feed on the upper surface of leaves, leaving behind veins. Damage is frequently seen near the top of the tree or plant first. These beetles often feed in large groups.

Japanese beetles spend most of their one-year lifecycle underground as a white, c-shaped grub. These grubs feed on grass roots and can damage turf if populations are high. Grubs pupate in late spring and emerge from the ground as adult beetles around early to mid-June.

Adult beetles then fly to potential host plants, particularly those in full sun. If a plant is found to be palatable after a test bite, then the beetle remains on the plant to feed. This feeding damage causes the plant to emit floral scents that are then attractive to other Japanese beetles, leading to large congregations of the beetles on certain plants.

After mating, each female beetle lays 40–60 eggs in the soil over the course of her 30–60 day lifespan. These eggs hatch into grubs in July and August. Most adult Japanese beetles are gone for the year by mid-August. 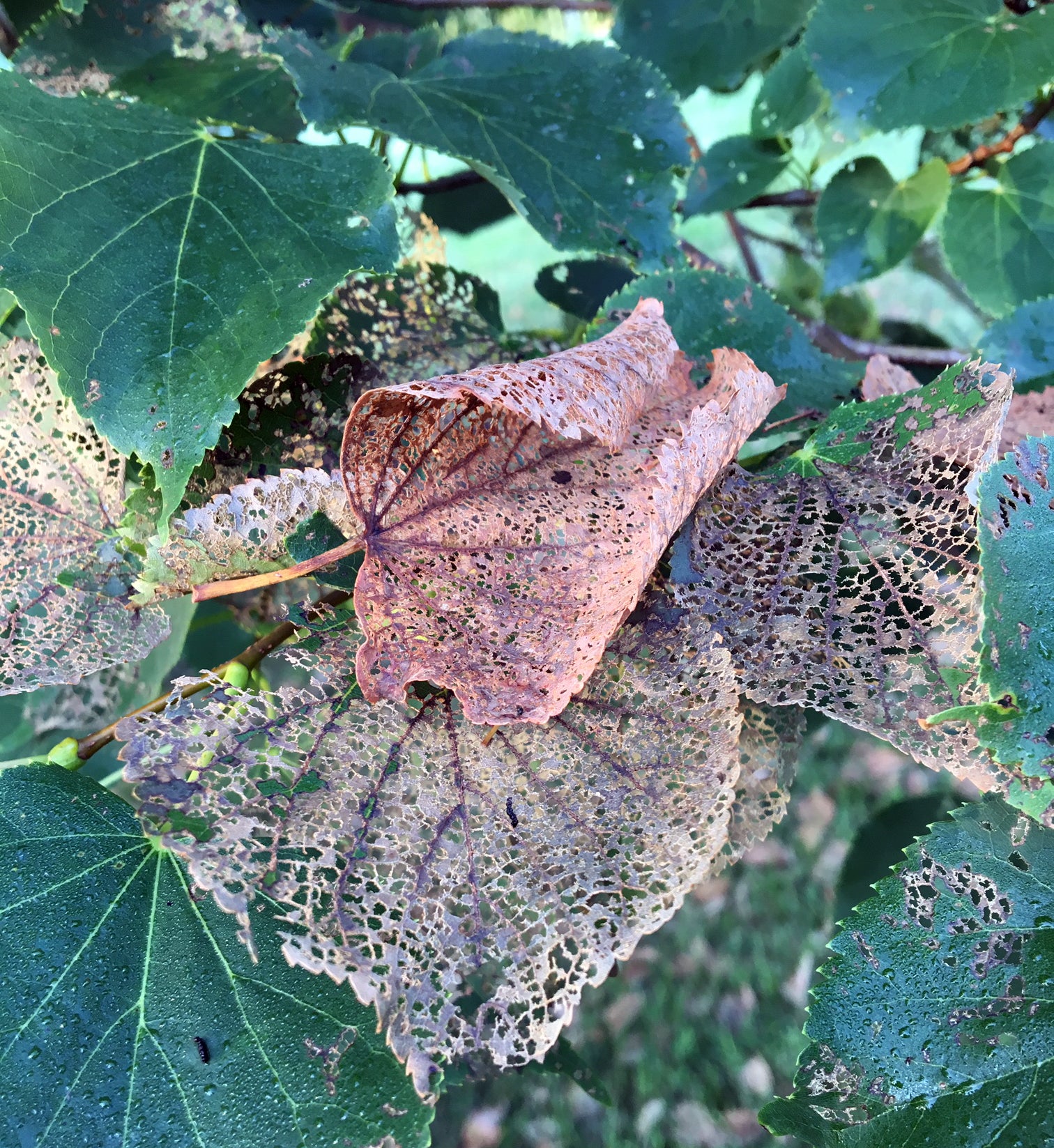 Healthy, established trees can typically tolerate a heavy amount of feeding damage. However, this damage is a source of stress for trees. You can help your trees by watering them 2–3 times per month during dry times to avoid additional stress from drought. A good rule of thumb is ten gallons of water per inch of a tree’s diameter.

Title
If I control the Japanese beetle grubs in my lawn, will I have fewer beetles next year?

Controlling Japanese beetle grubs in your lawn won’t significantly reduce the number of beetles you see next year. Japanese beetles are strong fliers and can continue to fly in from neighboring areas over a mile away. Grub control may have more of an impact if you live in a forested area where turf grass is uncommon

Drought conditions in July and August can lead to the death of many newly hatched grubs. During severe droughts, irrigated or low-lying wet areas may be the only places that grubs survive. Unfortunately, Japanese beetles are well adapted to winter conditions typically seen in Missouri, so it is unlikely that populations will be reduced by average winter weather.

Title
Should I use a Japanese beetle trap?

Be cautious when using Japanese beetle traps as they are very effective at bringing beetles in from areas well outside of your yard. Traps don’t catch all the beetles they attract, so nearby plants may be heavily damaged by feeding. If you decide to use a trap, place it at least 100 feet away from plants you want to protect. Dispose of trapped beetles frequently by dropping them into a bucket of soapy water.

Plans for a mass trapping system are available through Lincoln University Cooperative Extension at https://ipm.missouri.edu.

Title
How can I control adult Japanese beetles?

Hand-picking is an effective and environmentally friendly method of control on low-growing trees and plants. By targeting early or light infestations, you may prevent further feeding damage by limiting the amount of floral scents emitted by the host plant. Shake stems and branches with Japanese beetles over a bucket of soapy water. Beetles are typically sluggish and easy to capture early in the morning.

Insecticides are not compatible with trying to maintain a pollinator-friendly yard and should never be used on flowering plants or trees that will attract bees and other pollinators.

Organic insecticides containing azadirachtin, spinosad, or Bacillus thuringiensis galleriae may be effective deterrents for a few days. Neem oil is useful in deterring beetles from feeding if used at the first sign of damage and when infestations are light. These treatments are considered more pollinator-friendly than other insecticides but should still be used with caution.

Broad-spectrum insecticides are available for control of Japanese beetle adults (e.g. acephate, carbaryl, cyfluthrin, permethrin, zeta-cypermethrin); check the label to confirm Japanese beetles and your plant species are listed. These chemicals may need to be reapplied at labeled intervals, especially in hot or rainy weather. Avoid using these products on blooming plants as they could kill pollinators for several days after application.

Systemic insecticides, such as those containing imidacloprid, can be applied as a soil drench to protect some types of trees and shrubs from adult Japanese beetles (follow all label restrictions). In order to be effective, these products need to be applied when trees begin to break dormancy (usually around mid-to-late April) as it can take 4–6 weeks for a large tree to translocate the insecticide from the soil to the leaves.

Title
Are there any biological controls for Japanese beetles?

Title
What should I do next year to protect my trees and plants?

Preventing early feeding damage can protect trees and plants in the following weeks.