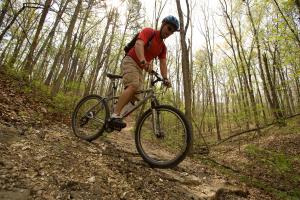 Cyclists now have more places to ride on Missouri’s conservation lands. Bicycles and some electric bicycles (e-bikes) are now allowed on roads open to public vehicles, multiuse bike trails, and most service roads. MDC has approximately 1,100 conservation areas, so check Places to Go, the online conservation atlas, to discover which areas allow bicycle use. Also check for road closures on the days you want to ride as some roads and trails are closed during hunting seasons.

Guidelines for Cycling on MDC Areas

Multiuse bicycle trails are shared-use trails that are maintained as bike trails but are also used by hikers and sometimes horseback riders. The trails are typically a combination of single- and double-track paths through woodlands and grasslands.

Know Where You Can Ride

Service roads are pathways used by MDC vehicles for maintenance purposes. Sometimes they are graveled, but they also could be infrequently mowed paths. Bike riding is allowed on most service roads, but road conditions may vary greatly between areas. Bicycle use is not permitted on service roads on department lands associated with nature and education centers, fish hatcheries, staffed ranges, offices, and designated natural areas.

Trails and service roads may be closed at various times during the year, especially during firearms deer, spring turkey, and/or waterfowl hunting seasons. Check if hunting is allowed on the area, and avoid cycling during busy times.

Get a Group Permit

Groups of more than 10 people using bicycles on conservation areas must obtain a special use permit.

Check Places to Go to see if the conservation area you want to visit allows bicycles or has any road closures on the day you want to ride.

You can search for bike trails and service roads using the Advanced Search feature. 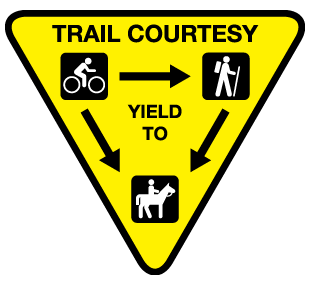 All cyclists are responsible for maintaining a safe speed and sharing the trail with others. Remember:

The following areas are closed to bicycle use during all portions of firearms deer hunting seasons in November, December, and January and spring turkey hunting season in April and May:

Title
Which e-bikes are allowed on MDC conservation areas?

E-bikes are defined by MDC as two- or three-wheeled devices with fully operable pedals, a saddle or seat for the rider, and an electric motor up to 750 watts. To ride on conservation areas, the e-bike must also be in one of these classes:

There are no events scheduled at this time.