A perennial aquatic plant usually growing submerged in or emerging from water, often forming bushy colonies. Flowers are massed at the tips of stems; they are minute; the 4 tiny petals are white, sometimes tinged with lavender. Blooms April–October. Leaves alternate, clasping the stem with small rounded auricles (earlike appendates), most leaves pinnately compound with 3-9 leaflets, with a rounded leaflet at the top and several opposite, rounded leaflets along the leaf axis.

Size
Height: to 10 inches.
Where To Find 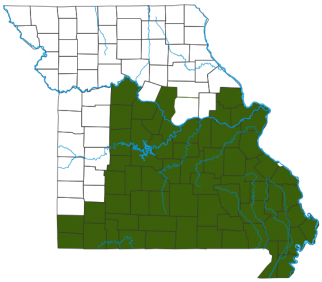 Introduced in scattered locations statewide. Most common in Ozark and Ozark border counties of southern and central Missouri.

Most common in and around the cold waters of springs and spring branches. It also occurs on banks (especially when stranded by a receding waterline) and in fens, marshes, and ditches. Watercress can grow as a submerged, floating, or emergent plant. It roots at the stem nodes and grows easily from cuttings.

Botanists have long pondered the origin of watercress: Is it native to North America? For a long time, people pointed to watercress's presence at remote spring branches as evidence that it is native. However, those locations were not as pristine as formerly believed. Today most agree that it is in fact an Old World species that was introduced to North America. The name "cress" is used for a variety of edible, peppery plants in the mustard family.

Watercress is used as a salad green and has a tangy flavor. Collect it only from uncontaminated sources and be sure to wash it thoroughly to remove microscopic parasites such as Giardia. Many people enjoy simply seeing its lush greenery on canoe trips.

Humans are not the only ones to eat watercress. Herbivorous fish, birds, and mammals nibble its greens, as do numerous aquatic insects, snails, and more. It also often hosts masses of aphids, which is another reason to wash it well prior to eating it.
Title
Media Gallery
Image