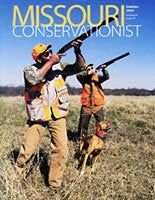 On a late October day, a fall thunderstorm gathers its skirt of clouds and rumbles off to the east. The wind drops as the clear evening sky deepens to indigo blue. The unmistakable bite of winter does not bode well for the few remaining tomatoes in the garden, and a "hard freeze" warning posted on the 6 o’clock news confirms their fate.

The next morning, most Missourians will bemoan the loss of those tomatoes and the last few roses of summer, but those who know where to look will discover a whole new garden of incredibly delicate beauty. Whether deep in an Ozark forest or in the weedy corner of a vacant metropolitan parking lot, a perfect natural brew of biochemistry, physics and meteorology has again produced the miracle of the frost flower.

Although the name is colorfully descriptive, a frost flower is really neither "frost" nor "flower," but layers of ice squeezed from the stem of a plant. True frost is formed similarly to dew on the surface of objects, such as rose petals, window panes and pump handles. When the air or an object is below freezing, dew converts directly to ice upon touching a surface, forming crystalline rime or hoar frost.

Large frost crystals sometimes build one on top of the other to form "ice flowers," another natural phenomenon often found on rocks near Ozark springs and around city manhole covers. If the condensing moisture converts to water before freezing, amorphous frost or glazing occurs. This can be the protective coat of ice on fruit trees or the dangerous ice build-up on power lines and airplane wings.

Frost flowers, on the other hand, form when moisture already inside the stem of a plant freezes. One of the special properties of water is that it expands when it freezes. Like a bursting water pipe, the tender skin of the plant stem splits under the pressure of the expanding ice.

Because of the cell structure of the plant’s stem, fissures occur in tiny vertical rows. Capillary action in the plant’s veins pumps the moisture out through these minuscule cracks like translucent ribbon candy.

As crack after crack yields a layer of ice, the total effect resembles the many layers of a flower petal. Air bubbles trapped in the ice makes it appear frothy white.

If the air is cold and still when a frost flower forms, the ice layers push straight out into large silvery feathers. When conditions cause the leading edge of ice to thaw slightly as it forms, the frost flower will curl inward around the stem like cotton candy on a stick. Each layer of ice is so thin that the total frost flower is almost weightless and will shatter like glass if touched.

Frost flowers occur in many parts of the world and all across the state of Missouri. However, only a few species of plants produce frost flowers, and the formations never occur in exactly the same manner from one year to the next, or even from one night to the next. That is what makes finding them so exciting and wonderful.

Native Missouri wildflowers that mature late in the year, such as yellow ironweed (Verbesina alternifolia) and white crownbeard (Verbesina virginica), are good frost flower prospects. In fact, white crownbeard also is commonly called frostweed. It has long, toothy oval leaves and a crown of small white flowers. Reaching a height of up to seven feet, white crownbeard grows in open woods, valleys and streamsides south of the Missouri River.

Yellow ironweed grows statewide in moist, lowland woods and along streams. The plant is similar in appearance to white crownbeard, but it produces numerous ragged, yellow flowers. Stems of these plants are still green and tender in late October, and have a pithy core that can hold a lot of moisture–key factors in frost flower formation. Plants that already have died and turned dry and brittle before the first hard freeze will not produce any frost flowers.

Frost flowers have a brief life span so early morning is the best time to find them. The first rays of the sun soften their delicate edges and, well before noon, they melt completely. Only on the coldest fall days, in the most shady and sheltered spots, will frost flowers last more than a few hours. The good news is that they often form again, even on the same plants, with successive hard freezes until all of the moisture is finally driven from the stems.

Just like fall foliage color, predicting frost flower formation is an inexact science. On the average, frost flowers begin forming in Missouri with the first hard freeze in late September or October, continuing through late November or early December.

Warm wet autumns, like we had in the flood year of 1993, produce especially lush, abundant foliage. An early hard freeze in central Missouri that year caused spectacular frost flowers to form four and five feet high on weed stems.

Conversely, dry fall weather means little moisture in the plant stalks. Under such conditions, frost flowers tend to take shape only at the base of the stem in chubby little petal cups. Unusually mild winters, like the El Nino winter of 1997, may cause frost flowers to form as late as February.

From a distance of several feet, the "average" frost flower looks like a thick, milky spider web or a carelessly discarded white foam coffee cup. You can often spot them while driving along roads with narrow shoulders and unmowed rights-of-way. Find a safe place to park and ask for landowner permission before taking a closer look. Remember to look in your own garden or in that patch of weeds behind the garage early on frosty fall mornings. Frost flowers can bloom in the most delightfully unpredictable places.

When I was a little girl, I found my first frost flowers in an abandoned woodlot. Since no one ever ventured there but me, I just knew the ice blossoms scattered across the forest floor had to be the work of elves and fairies. On frosty Ozark mornings, I choose to believe the fairies are still at work