The eastern American toad is medium-sized and has a wartlike, kidney-shaped gland (called the parotoid gland) behind each eye. The bony ridge above each eye usually does not touch the parotoid gland, but it may be connected to it by a small spur. Large black or dark brown spots on the back usually encircle one or two warts. A narrow, light stripe down the back may be present. The general color may be gray, greenish gray, or various shades of brown. The belly is white with dark gray mottling. The male's call is a sustained, high-pitched trill lasting 6–30 seconds.

Similar species: There are two subspecies of American toad in our state: The eastern American toad (Anaxyrus americanus americanus), described above, which generally lives in the northern half, and the dwarf American toad (A. americanus charlesmithi), which lives in the southern section. The latter is generally smaller (only about 2 inches long, snout to vent). Its ground color can be reddish brown, and the size and number of dark spots on the back are reduced or absent. The belly is cream colored with a small number of dark gray spots on the breast. Its call is similar to the eastern American toad, but it is slightly higher in pitch.

Note that the two subspecies of American toad mate with each other when they occur in the same area, so there is a wide band of intergradation between these two subspecies along a line from St. Louis to northern Joplin.

Also, the two subspecies of the American toad in Missouri have been known to hybridize with the Fowler’s toad (Anaxyrus fowleri) and the Rocky Mountain toad (Anaxyrus woodhousii woodhousii) in some parts of the state. The offspring of these crossbreedings are very difficult to identify because they often have characteristics of both species. Generally, hybridization occurs when there is an overlap of breeding activity or where human activity has caused extensive habitat disturbance. 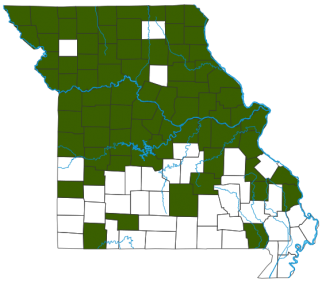 The American toad can be found in about any habitat in Missouri, but it prefers rocky, wooded areas and often lives along the edge of hardwood forests. They are also found in disturbed habitats, such as urban and suburban, agricultural, and mined sites. People often see them in backyards, parks, and gardens.

Individuals hide during the day under rocks and logs where there is loose, moist dirt, or they burrow into a depression where dead leaves have accumulated. Like most toads, this species becomes active at dusk.

All of Missouri’s species of true toads are primarily nocturnal, seeking shelter during the day among piles of dead leaves, under rocks and logs, or in loose soil.

Eats earthworms and a wide variety of insects. Toads are well-known for their consumption of large numbers of insects. During summer nights, toads often catch and eat insects as they fall to the ground under outdoor lights.

The scientific name used to be Bufo americanus, but researchers in 2006 showed convincingly that some of the species formerly grouped together in the genus Bufo were different enough to warrant being separated into different genera. That is why our toad is now named Anaxyrus americanus.

In Missouri, males begin calling on warm nights in mid-March and early April. Breeding generally peaks from late April into May, with calling activity continuing into July. Breeding sites include both temporary pools (such as sinkhole ponds and human-made ponds), and slow, shallow streams.

The number of toads calling at a breeding site varies annually; some years a site might have more than 50 toads, while the following year there might only be 5–10 individuals.

Eggs are laid in long, double strands and are deposited on the bottom in shallow water or entwined in aquatic plants. A female can lay 2,000–20,000 eggs, which hatch, in about a week, into tiny black tadpoles. The tadpoles often are found in danse aggregations in shallow water near the shore. The tadpoles remain in water until late June into July, when they transform into small toadlets about ½ inch long.

American toads are known to live about 4–5 years.

Contrary to superstition, toads do not cause warts on humans. They are harmless.

Despite toads' complexion and dour countenance, many people find them endearing.

During summer nights, toads help us by consuming insects and other small organisms that are pests or annoyances to us.

Toads are predators that help keep populations of insects and other small animals in balance.

They, and especially their eggs, tadpoles, and young toadlets, become food for both aquatic and terrestrial predators ranging from water bugs to fish to grackles to raccoons. Even though American toads can lay a large number of eggs, there is no guarantee that the tadpoles will survive to metamorphosis. A study in Missouri estimated that 200,000 eggs that hatched in a pond over a two-year period resulted in no tadpoles surviving due to high predation.

A mutualistic relationship between algae and salamander eggs has been well-known. The eggs of spotted salamanders, for example, usually have algae growing on the early stages of the developing embryos within the eggs. The algae apparently proviee oxygen to the embryos, and the developing larvae provide carbon dioxide and waste products that can be used by the algae. But only recently has such a relationship been documented in toad tadpoles. This was first documented in 2006 in Arkansas, where the green algae (Chlorogonium) was found toad tadpoles. American toad tadpoles collected from Clark County, Missouri, also contained green algal patches on their skin that was found to be Chlorogonium algae.

There's a group of insects called toad bugs, which look a great deal like miniature toads. They even hop! They live along stream banks and, like their namesakes, are well camouflaged. 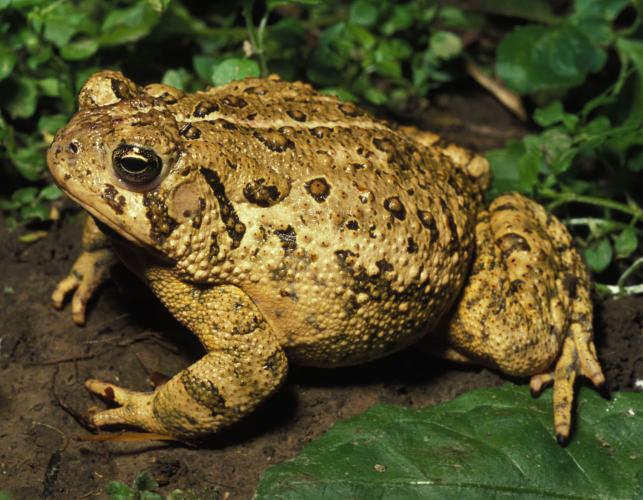 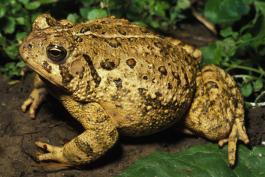 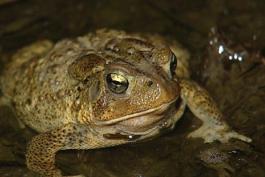 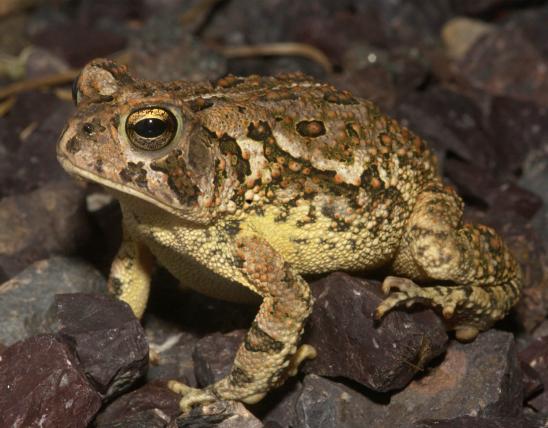 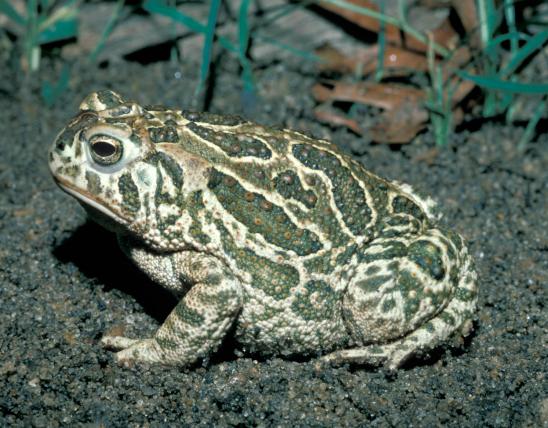 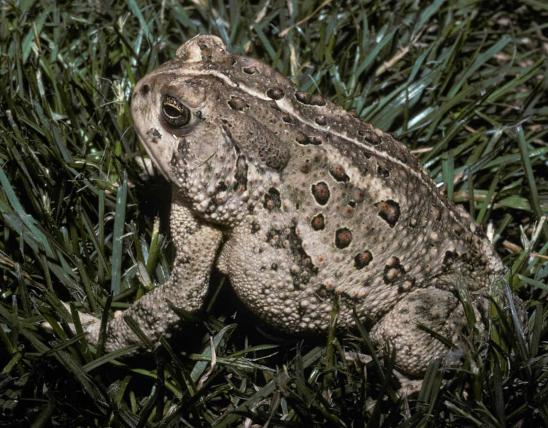 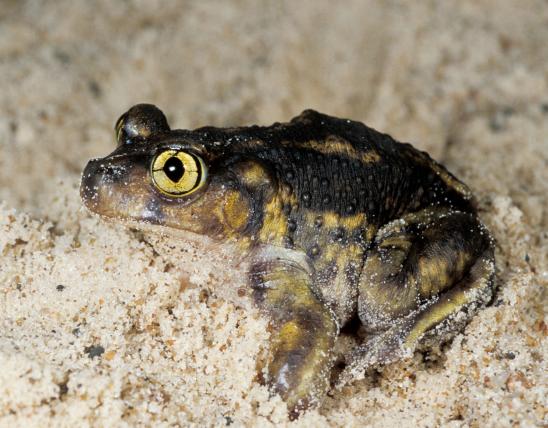 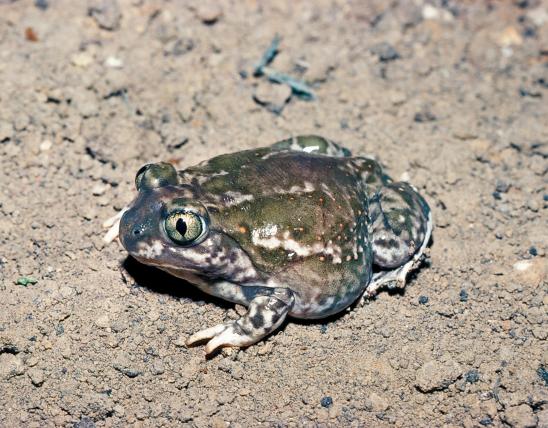 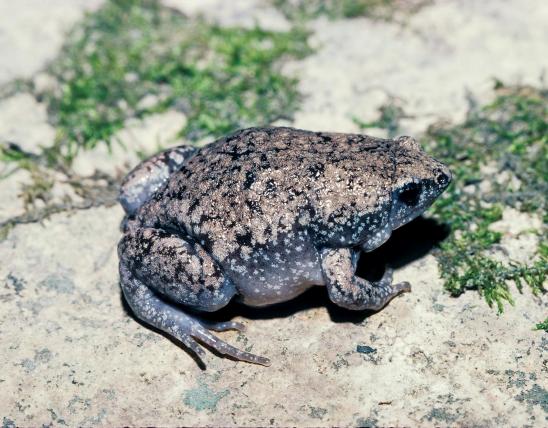 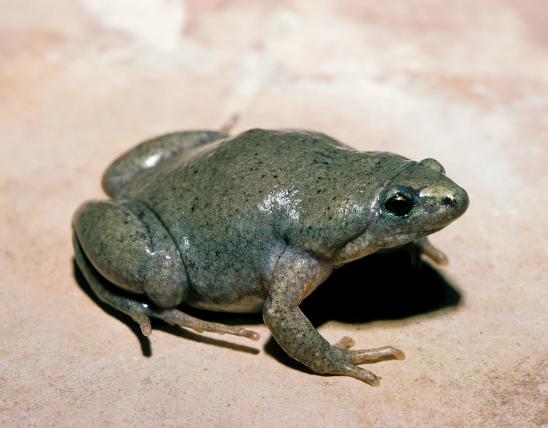 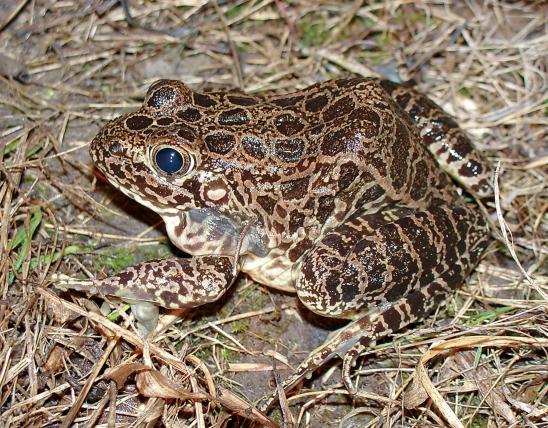 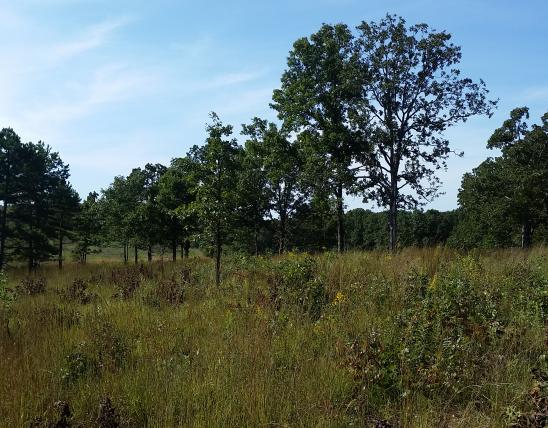 Canaan Conservation Area
Canaan Conservation Area is located in Gasconade County, near Bland. Take Route A about 1.2 miles north from Bland to the Conservation Area's southern most access road.
About Reptiles and Amphibians in Missouri
Missouri’s herptiles comprise 43 amphibians and 75 reptiles. Amphibians, including salamanders, toads, and frogs, are vertebrate animals that spend at least part of their life cycle in water. They usually have moist skin, lack scales or claws, and are ectothermal (cold-blooded), so they do not produce their own body heat the way birds and mammals do. Reptiles, including turtles, lizards, and snakes, are also vertebrates, and most are ectothermal, but unlike amphibians, reptiles have dry skin with scales, the ones with legs have claws, and they do not have to live part of their lives in water.