Missouri is home to nearly 50 species and subspecies of salamanders. Salamanders are amphibians, like toads and frogs.

Although most salamanders have a lizard-like body shape, their skin is moist, similar to the more closely related frogs.

Also like frogs, many salamanders undergo metamorphosis. When young, they are fully aquatic, with finned tails and featherlike exposed gills. As adults, they live on land, breathing with lungs.

Salamanders lack scales and claws, and they require freshwater or a damp environment to live. Most must return to water to mate and lay eggs. Some species, however, are totally aquatic. 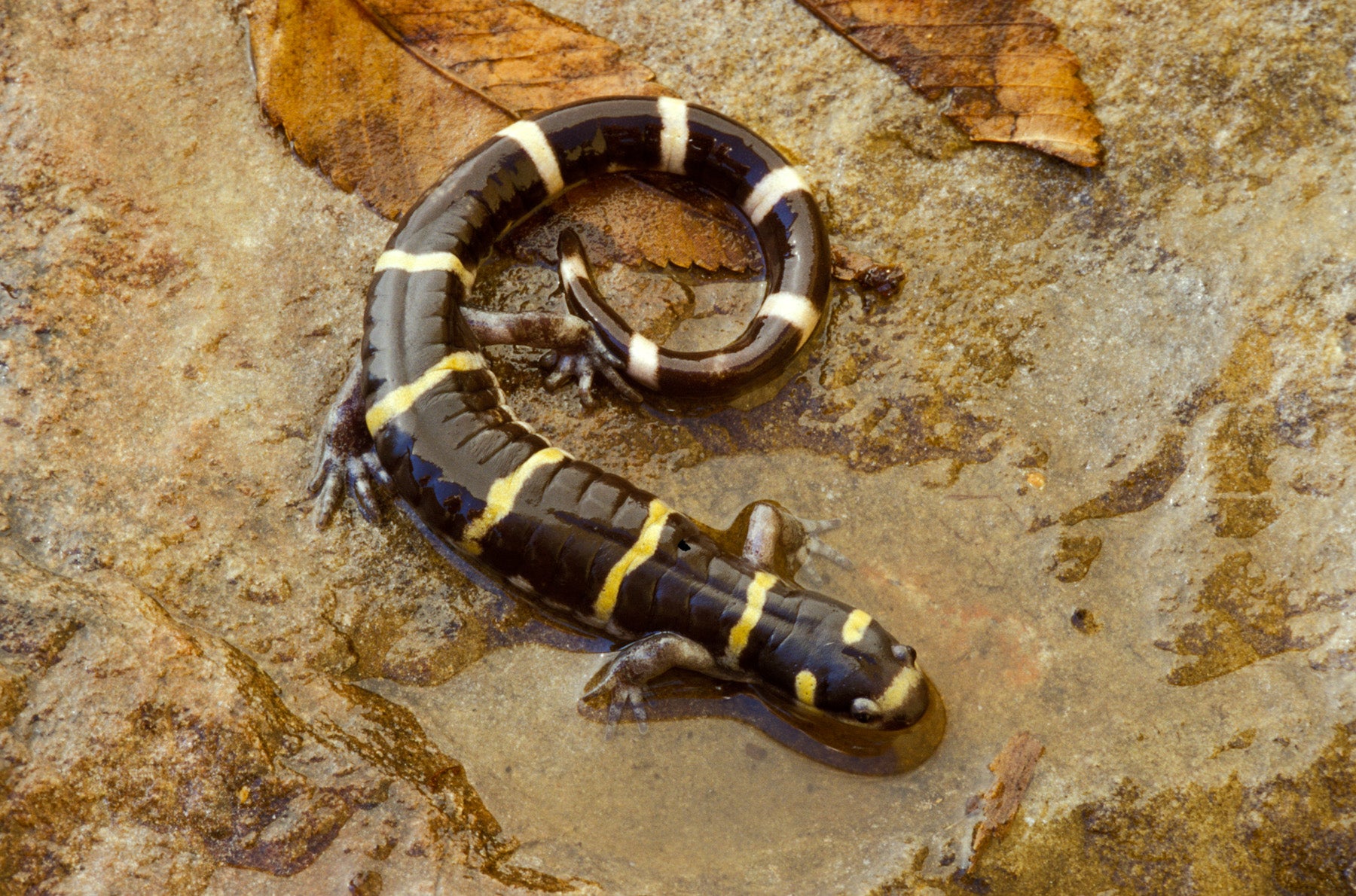 If you are fishing and catch a hellbender, amphiuma, lesser siren, mudpuppy, or other amphibian, cut the line and release them unharmed. Most amphibian populations are declining, none are poisonous, and none threaten our fisheries. They are an integral part of our aquatic fauna.

Amphibian populations are declining. Ten salamanders (a fifth of our salamander species!) have been declared Species of Conservation Concern in Missouri. Hellbenders are endangered in our state. The Ozark hellbender subspecies was recently placed on the federal endangered list.

There are six families of salamanders in Missouri.

Hellbenders belong to the giant salamander family. Missouri is the only state to hold both subspecies: the eastern hellbender and the federally endangered Ozark hellbender. They’re fully aquatic and live under flat rocks in large Ozark streams and rivers.

Lesser sirens are permanently aquatic, eel-like animals, with small eyes, external gills, four toes on the small forelimbs, and no hind limbs at all. We have one species in our state, the western lesser siren, which lives in sluggish waters along the Mississippi River and in the Bootheel.

Mole salamanders are represented by six species in Missouri, including the spotted salamander, small-mouthed salamander, and eastern tiger salamander. They spend most of their time underground, often in burrows made by small mammals, and are active at night, especially after heavy rains.

Newts, unlike most salamanders, have rough, almost bumpy skin as efts (the middle life stage, which lives on land). The central newt is our only species in this salamander family, and it’s found nearly statewide, excluding the northwestern corner.

Amphiumas are eel-like and have four tiny, almost useless limbs, small eyes, and smooth skin. Our one species, the three-toed amphiuma, lives in the lowlands of southeastern Missouri. It can reach a yard in length! Sadly, its existence in our state is imperiled.

Lungless salamanders include eight species of this salamander family in Missouri. As adults, they lack lungs and most lack gills. They absorb oxygen through the skin and mucous membrane in the mouth. They live in a range of moist habitats, including forests, springs, caves, cold streams, and seeps near rock outcrops.

Mudpuppies, sometimes called waterdogs, are totally aquatic and have permanent external gills. Two types of mudpuppies are found in Missouri: Although some herpetologists consider them separate species, others consider them subspecies. They are Species of Conservation Concern in Missouri.

Title
Life in Water, Then on Land

Amphibious means something that combines two characteristics. In the case of salamanders, toads, and frogs, it refers to the two different environments they require to live. Their soft, gelatinous eggs and gilled larvae must live in water, but the adults typically live on land and breathe air.

Amphibians played a vital role in the evolution of land vertebrates. In the late Devonian, lobe-finned fish, moving overland to escape drying-up freshwater swamps, led to the rise of early amphibians. Later, some amphibians became established on land (if only during part of their lives) and eventually led to genetic branches that no longer needed to return to water to reproduce. Some of these animals give rise to the first reptiles, whose leathery eggs wouldn’t dry out if laid on land.

Whether they require swamps, streams, rivers, lakes, ponds, or temporary ponds and ditches, these and other aquatic animals are vulnerable to water pollution, siltation, and other degradation. Habitat destruction and fragmentation also threaten their survival.

Several of our salamanders live in caves, seeps, and spring openings. Taking care of our cave ecosystems and protecting groundwater quality is critical for their survival.

Landowners take note: Fallen logs, especially on steep, north-facing forested hillsides in the southern half of the state, are important refuges for woodland salamanders and other wildlife.