Most Missourians just call it “the woods,” but land managers use the terms “forests” and “woodlands” to describe the variety of wooded habitats in Missouri.

Many factors influence the character of forests and woodlands. Soil and underlying rock types, slope, aspect, hydrology, and climatic factors contribute to a variety of plant communities within the broad categories of forest and woodland.

Forests or Woodlands? There's a Difference

We all know that the woods are places where trees predominate, but it’s useful to distinguish between various types of wooded areas. First, learn the difference between forests and woodlands.

Technically speaking, forests have a closed canopy permitting very little light to penetrate to the ground below. There are often several overlapping layers of trees, with a mid-story and understory comprising a variety of shade-tolerant shrubs and a sparse layer of soft-stemmed plants.

Woodlands have a more open canopy (30 to 100 percent cover), and their sparse, woody mid-story allows more sunlight to reach the ground. This light permits the growth of a dense ground cover containing a variety of wildflowers, grasses, and sedges. Fire plays a large role in maintaining woodland habitats.

Why Are Some Places Wooded and Others Not?

Ecologists have long recognized the concept of a climax community. There is a tendency for a certain type of plant community to develop and dominate an area and remain relatively stable over time. Barring disasters — such as bulldozing, plowing, fire, or major flood — a climax community can sustain itself for centuries.

Due to our land types and climate, most of Missouri’s climax community is forest. Missouri’s grasslands, if left completely undisturbed, would eventually be colonized by a succession of woody plant species, becoming woodland and finally forest. Natural disturbances and fires lit historically by Native Americans kept prairies, savannas, and woodlands from turning into forests.

Woodlands, savannas, and prairies are maintained by disturbance. Without occasional fires, in particular, they will eventually become forest. Many decades of fire suppression led to Missouri’s current landscape, which has a greater proportion of forest to woodland than it did before European settlers arrived.

Wooded ecological communities are interdependent and even overlap. Over the years, people studying the landscape have systematically described and labeled forests, woodlands, and other habitats in different ways for different purposes. Below are some of the ways to describe our different kinds of forests and woodlands.

Soil moisture is determined by precipitation, slope, drainage, and amount of sand or organic materials in the soil. Three terms are central for describing the amount of moisture available in the soil: dry, mesic, and wet. These terms are especially useful if you’re describing where plants live.

The meanings of “dry” and “wet” are obvious, though they do have technical definitions. Mesic (MEE-zik), a less familiar term, means that a moderate amount of moisture is available. Mesic soils are moderately well drained, though the water is removed somewhat slowly, so the ground is somewhat moist for a significant amount of time.

In Missouri, dry and dry-mesic forests and woodlands typically occur on or near uplands: hilltops, glades, and bluff tops, especially on south- or west-facing aspects on rocky, sandy, or thin soils.

Our wet and wet-mesic forests and woodlands are in or near bottomlands and other low, often-flooded areas close to the water table. Some of our wettest forests are in the Bootheel, where swamps naturally predominate, and along our big rivers.

Our mesic forests and woodlands lie in areas between wetter lowlands and drier heights.

Missouri’s different regions have different soils, underlying rocks, and topography, so our forests and woodlands are often distinguished regionally or by naming the underlying rock types, which are a great influence on soil chemistry. Here are some principal types.

Glaciated forests and woodlands are in the northern half of Missouri, which glaciers covered over 400,000 years ago. This region typically has deep soils of fine, yellowish wind-blown loess over buried rocky glacial till. Rolling hills, gentle slopes, grasslands, and croplands predominate in northern Missouri, but the valleys, steeper slopes, low areas, and river drainages are typically wooded.

Ozark forests and woodlands include most of southern Missouri. The Ozark highlands are an ancient mountain chain that’s been eroding for a quarter billion years. Limestone, dolomite, and chert are the main rock types, though in some areas igneous rock (such as granite) or sandstone predominate. Streams have eroded deep valleys and created rugged landscapes with rocky soils. The Ozarks are the region of Missouri’s karst topography, with its many caves, springs, and sinkholes. Low areas are rich, moist bottomlands, while hilltops and knobs are rocky and dry. While oak woods are most typical, the eastern section of the Ozarks includes remnants of Missouri’s once-immense shortleaf pine forests.

Bottomland forests occur on deep soils along floodplains statewide, particularly along larger rivers. Less than 20 percent of presettlement bottomland forest remains, since rich floodplain soils have proven so valuable for cropland. Some common bottomland trees include cottonwood, willows, green ash, sycamore, box elder, and silver maple. As you move farther uphill, away from the most flood-prone areas, certain oaks and hickories, hackberry, walnut, and elms take over as the primary canopy trees.

The southeastern lowlands of Missouri’s Bootheel once had our state’s densest forests: swampland beneath a canopy of bald cypress and other water-loving trees. Many years ago, people drained the swamps and converted most of the land to cropland. Only a few examples of these lush “swamp forests,” and their fascinating plants and animals, remain in our state.

Another way to describe Missouri’s forests and woodlands is by tagging them with the dominant trees in the canopy. Most of Missouri has some type of oak-hickory forest and woodland, with different oak and hickory species dominant in different places. In other places and situations, we have oak-pine forests and woodlands, or pine forests. Sometimes people use quite general labels: hardwood, deciduous, conifer. But some habitat classification systems use very specific labels, such as Ozark oak-pine and pine woodlands, white oak/dogwood dry-mesic chert forest, and pin oak/mixed hardwood wet bottomland forest.

A Multitude of Benefits

Forests and woodlands can occur anywhere in the state, but they predominate in the Ozarks, in the southern half. They also follow the paths of rivers and streams and occur on slopes too steep or rocky for plowing. A typical satellite view of Missouri shows our forests and woodlands in dark green. About one-third of the land area in Missouri is wooded, about 15.5 million acres. 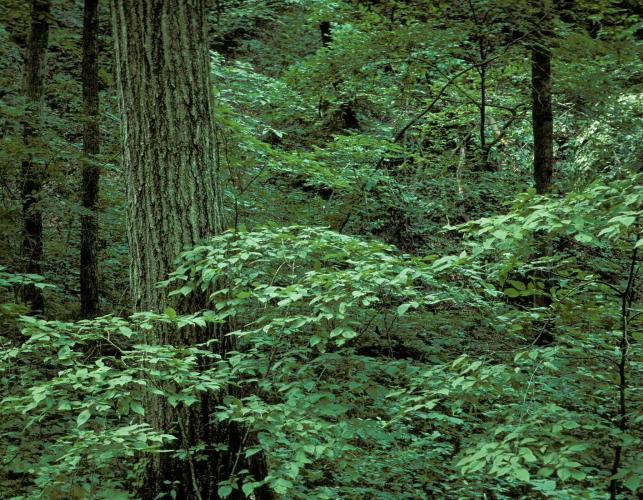 Caption
True forests have a closed canopy permitting very little light to reach the ground. There are usually plenty of midstory trees, but few groundcover plants.
Credit
Jim Rathert
Right to Use
1/2
Image 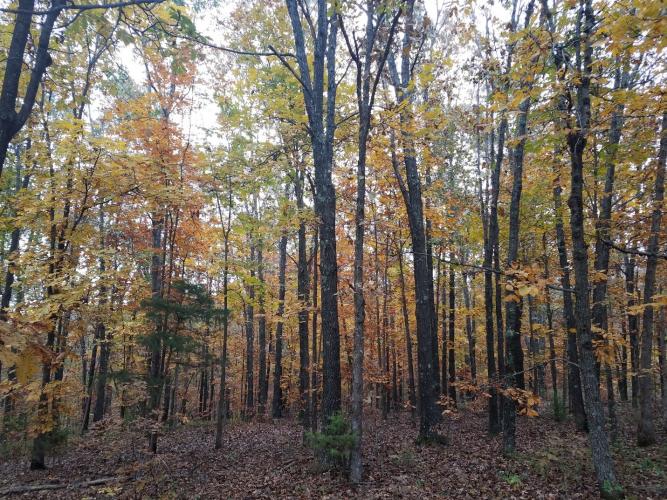 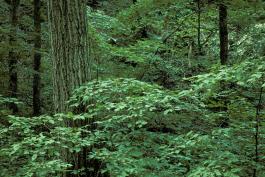 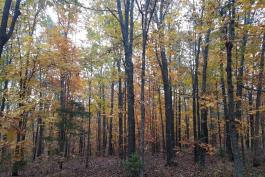 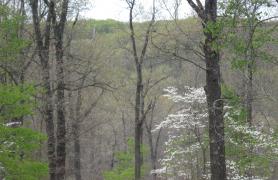 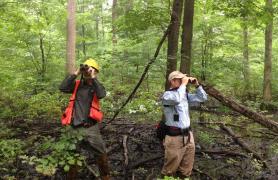 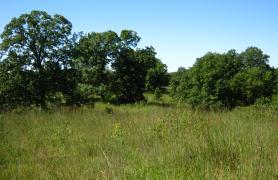 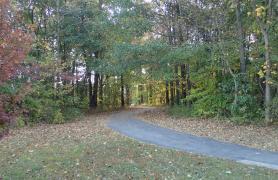 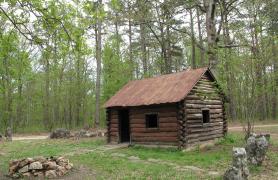 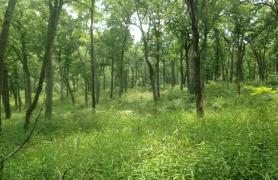 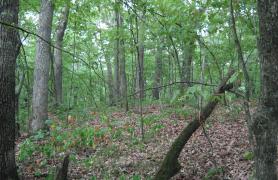 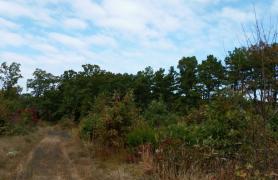 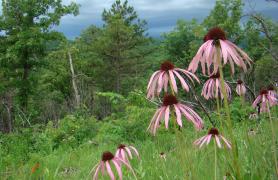 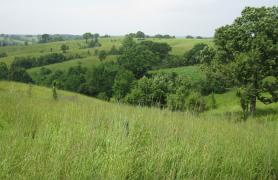 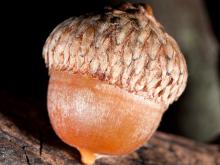 Species Types
Oaks
Scientific Name
Quercus spp.
Description
Oaks are the most important group of trees in Missouri, in both human and ecosystem value. They dominate most of the forests, woodlands, and savannas in the state. Learn more about our 22 species.
Media 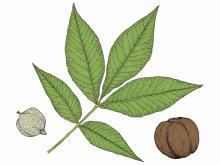 Species Types
Shagbark Hickory
Scientific Name
Carya ovata
Description
Many Missouri trees are quite useful, and shagbark hickory is a great example. Its wood makes excellent, slow-burning charcoal, its nuts are edible, and its wood is used for many implements. Wildlife from moths to squirrels to bats appreciate shagbarks, too!
Media 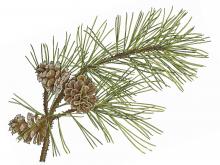 Species Types
Shortleaf Pine
Scientific Name
Pinus echinata
Description
Existing in thousands of acres of nearly pure stands, shortleaf pine was once the dominant tree in much of the Missouri Ozarks. Today, Missouri’s only native pine tree is recovering from the extensive logging that had exhausted its old-growth stands by the 1920s.
Media 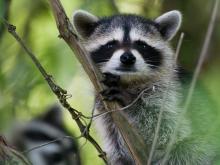 Species Types
Raccoon
Scientific Name
Procyon lotor
Description
When you see the black mask and striped tail of this medium-sized mammal, you know you’ve spotted a raccoon. These nocturnal omnivores are clever and adaptive.
Media

Species Types
Eastern Spotted Skunk
Scientific Name
Spilogale putorius
Description
Of the two species of skunks in Missouri, the eastern spotted skunk is less common and lesser known. It has been declining drastically in recent years because of habitat loss.
Media 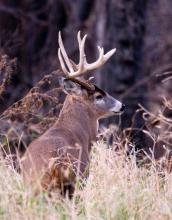 Species Types
White-Tailed Deer
Scientific Name
Odocoileus virginianus
Description
In summer, white-tailed deer are reddish-brown to tan above; in winter, they are grayish. The throat and belly are white. This common Missouri deer is named for the bright white of its flaglike tail.
Media 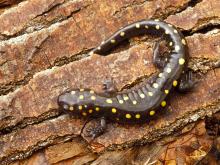 Species Types
Spotted Salamander
Scientific Name
Ambystoma maculatum
Description
The spotted salamander is one of Missouri's six species of mole salamanders. It is slate black with two irregular rows of rounded yellow spots from the head onto the tail. It occurs in forests in the southern two-thirds of the state.
Media 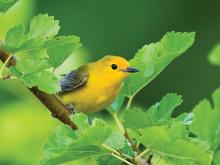 Species Types
Prothonotary Warbler
Scientific Name
Protonotaria citrea
Description
The swamp-dwelling prothonotary warbler has a yellow head, yellow breast and blue-gray wings. Look for it in forests and woodlands, usually near water. Most arrive in Missouri in April.
Media 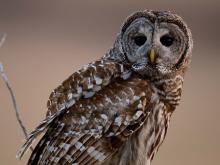 Species Types
Barred Owl
Scientific Name
Strix varia
Description
The barred owl is easily identified both visually and by sound. Learn to recognize its call, and on moonlit nights in their habitat, you may hear it quite often!
Media 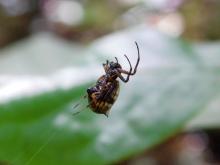 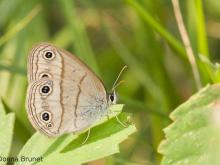 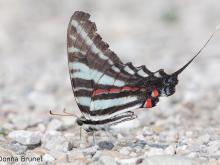 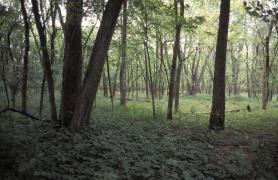 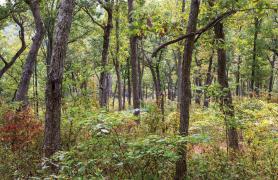 Missouri’s upland forests and woodlands are habitats distinct from our bottomland forests. Learning about them helps you understand more about the plants and animals that live in them. 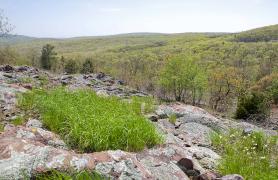 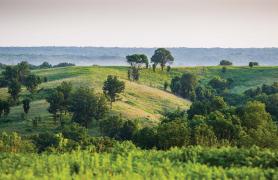 Like prairies, savannas are open areas dominated by native perennial grasses and forbs. With up to 30 percent tree cover, they have more trees than prairies, but fewer trees than true woodlands.