Snowy owls are large, white owls with rounded heads (no ear tufts) and yellow eyes. The ample plumage on their legs makes them look bulky at the base. Most of the snowy owls that visit our state are immature individuals that may move south due to a lack of space for territories after a very successful breeding season; these younger owls have extensive black barring on their otherwise white body and head. Adults, especially males, are very white with some barring. Females can have almost equal amounts of black and white. 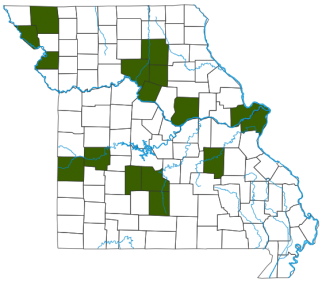 Although snowy owls might show up anywhere in the state, they are most likely to be seen in our northern counties.

The snowy owl occasionally visits our state in the winter. Peak numbers in Missouri occur about every four years. Many researchers have long believed this pattern is a response to lemming population booms or crashes in the far north.

The causes of snowy owl irruptions (migratory movements of a bird in abnormally large numbers) are not fully understood, but increasing evidence suggests that many immature birds show up due to a lack of space after extra productive breeding seasons when food is abundant in the arctic. A contrary, and older school of thought posits that immature birds move south in search of food due to food shortages in the arctic, but that may not be the case. Research is ongoing to learn more about how the food resources these owls depend on drive their numbers and can cause irruptions.

Only a small portion (usually immature individuals) are forced south. Snowy owls are most active during the day. In Missouri, they prefer open grasslands. They perch on the ground, on fence posts, or on hay bales. Because these tundra dwellers are not used to the dangers of power lines, people, and cars, please don't approach them; if you're driving and see a large white bird near the road, please slow down to avoid hitting them.

Snowy owls are uncommon in Missouri, and many birdwatchers and photographers travel to see these birds when they are spotted in the state. Birdwatchers and photographers must adhere to birding ethics and give these birds lots of space when viewing or photographing. If you are influencing the bird’s behavior to the point where it moves or reacts to your presence or noise, you are too close.

In their arctic habitat, snowy owls forage in grasslands and tundra primarily for lemmings and sometimes also ptarmigan and waterfowl. During the summer months, they rely almost solely on lemmings. In years when lemming populations boom, snowy owls can have large clutch sizes up to 11 or 12 eggs. When lemming populations are abundant, more snowy owl young survive. These years of very successful breeding may be when we see irruptions.

Here in Missouri, snowy owls may eat rabbits, squirrels and other rodents, mink and muskrats, and waterfowl and other birds, usually by sitting patiently on a fence post or other vantage point and looking and listening for prey.

Rare, sporadic winter visitor. Appears in Missouri during some winters and not others. This species' North American population is hard to estimate. Although their breeding territory is in the arctic tundra and faces little encroachment by people, climate change many affect them and/or the species they prey upon. Aside from habitat loss, the greatest threats to this bird are shooting and car collisions. This species occurs all around the Arctic Circle, including northern portions of North America and of Eurasia.

This owl nests on the ground in open tundra in its circumpolar summer range. When they visit Missouri, snowy owls usually appear between mid-November and February, although there are records in October and April. A clutch comprises 3–11 eggs, which are incubated for about a month. After hatching, they fledge after 18–25 days.

Although snowy owls do not occur in the United Kingdom, except as accidental visitors to its far northern reaches, a snowy owl named Hedwig is prominently featured in the Harry Potter books and movies. Composer John Williams's "Hedwig's Theme" is usually considered the main theme song of all the movies. In the stories, Hedwig is a female, but she was portrayed by male owls in the movies, because they are whiter and smaller.

Owls help control populations of small mammals. Snowy owls' ranges can shift due to changes in prey populations, which illustrates the interconnection between predator and prey, and how a scarcity or abundance of one can affect the fortunes of the other. 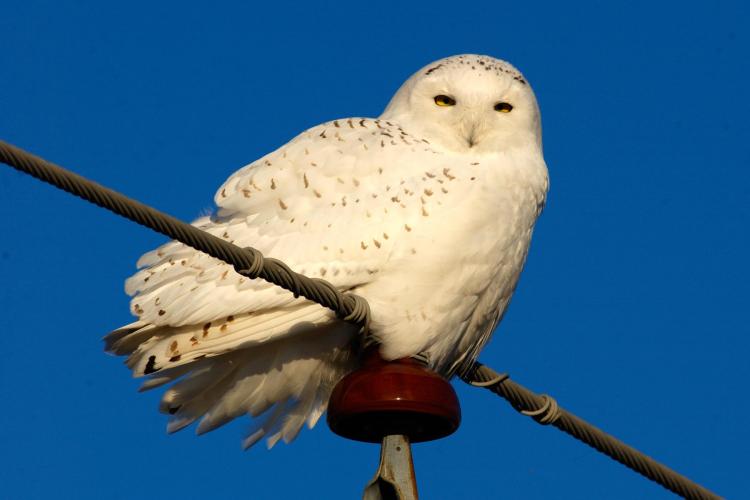 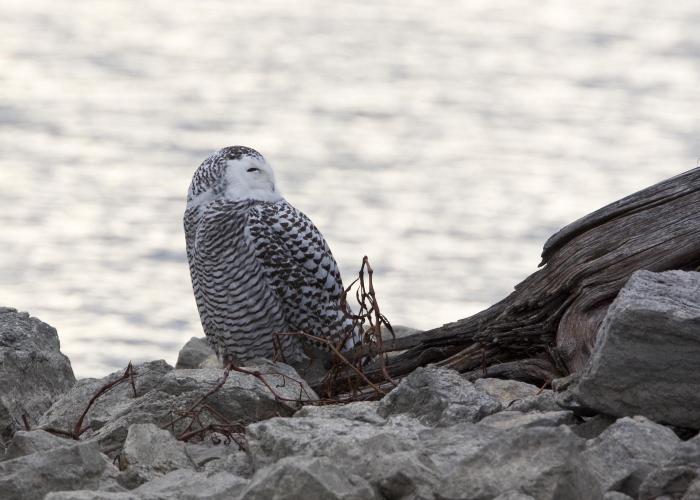 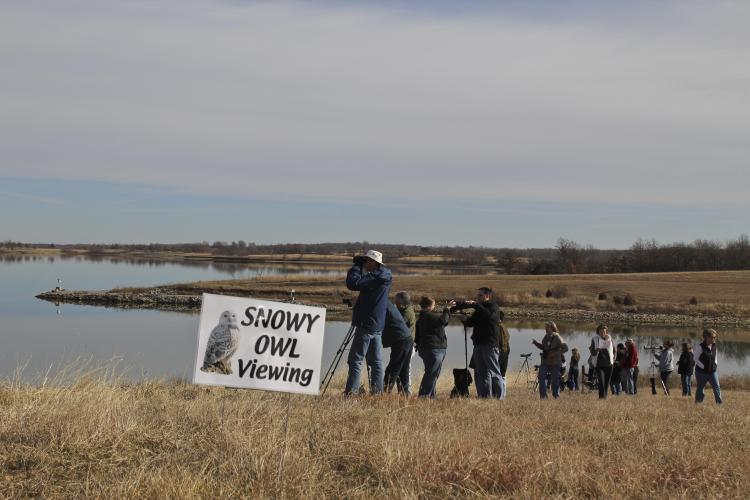 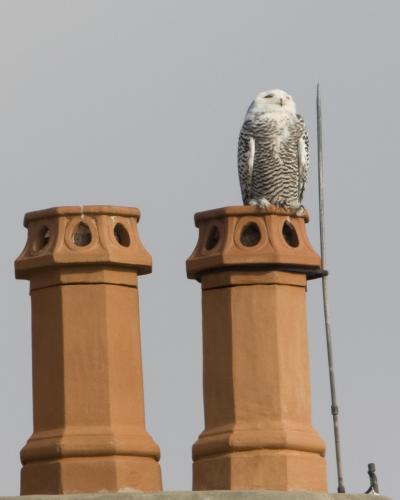 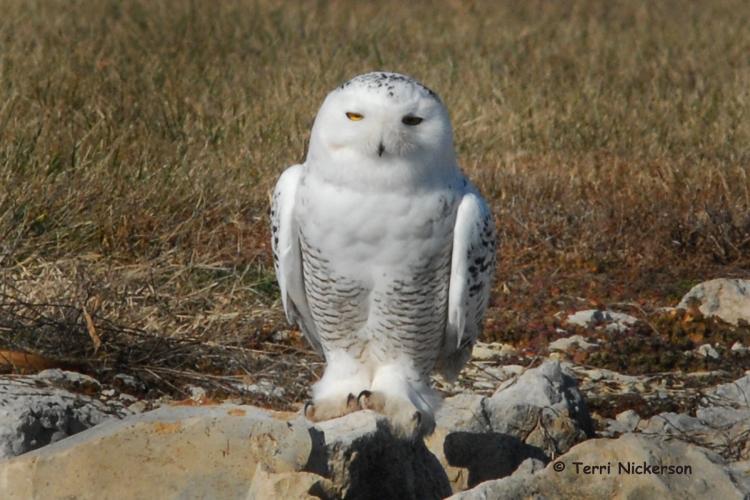 Caption
Snowy owls are rare in Missouri. This one was observed at Smithville Lake near Kansas City in December 2013.
Credit
Terri Nickerson
Right to Use
5/6
Image 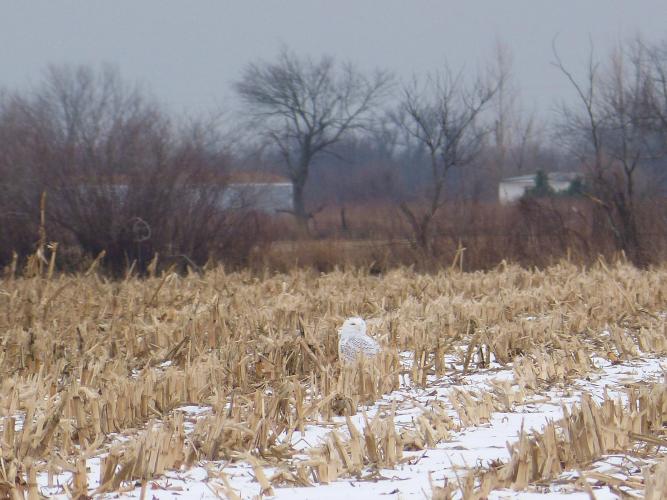 Caption
This snowy owl was seen resting in a snow-covered corn field near Kirksville during December 2013.
Credit
Krista Noel
Right to Use
6/6
Image 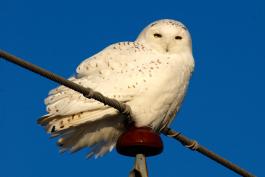 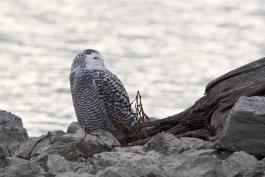 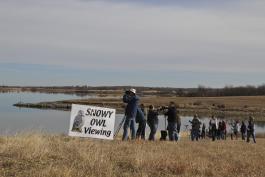 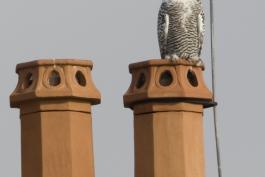 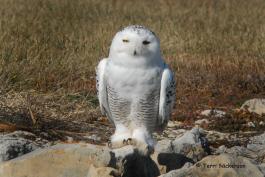 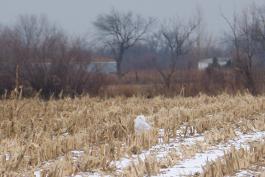 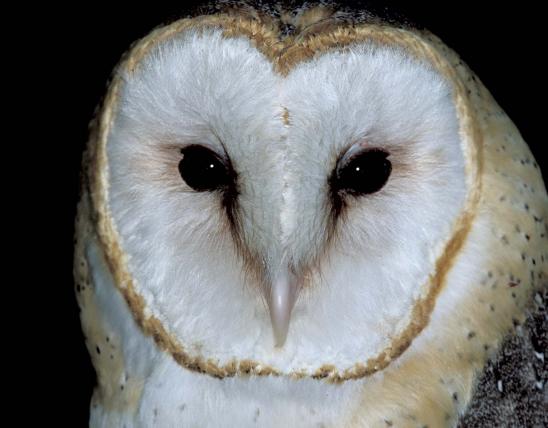 Barn Owl
About Birds in Missouri
About 350 species of birds are likely to be seen in Missouri, though nearly 400 have been recorded within our borders. Most people know a bird when they see one — it has feathers, wings, and a bill. Birds are warm-blooded, and most species can fly. Many migrate hundreds or thousands of miles. Birds lay hard-shelled eggs (often in a nest), and the parents care for the young. Many communicate with songs and calls.
Related Content
Bats