Adult red-eyed vireo upperparts are dark olive, with a gray crown and no wing bars. Eye line is black, eyebrow is white, and there is a black line between the gray crown and the white eyebrow. Underparts are white, with some yellow on the flanks in fall. As with other vireos, the bill is relatively thick until the tip, and there is a small hook at the tip. Iris of the eyes are red in adults, but this can be hard to see. The song, very helpful for locating this hard-to-see bird, is a monotonous series of 2-, 3- or 4-syllable whistles, with alternating up- and down-slurred phrases. The call, like that of most vireos, is a burry vray or tjay. Except for indigo buntings, red-eyed vireos may often be the only bird calling on a hot, humid summer afternoon in an Ozark forest.

Similar species: Warbling vireos lack the black line above the eyebrow. The yellow-throated vireo has a similar song, but it is given at longer intervals and is not whistled as clearly. The Philadelphia vireo’s song is also similar, but it is slightly higher, less emphatic, and has longer pauses between phrases; it is less common in our state, smaller, has a shorter bill, and has yellower underparts. The Tennessee warbler is colored similarly, but it flits around more busily, and its bill is shorter, thinner, with a pointed (not slightly hooked) tip. Vireos, as a group, can be distinguished from warblers by their thickish, slightly hooked bill. Warblers’ bills are narrow and taper to a sharp point.

Lives in the canopies of trees in mature forests and woodlands. This species moves slowly and deliberately among tree leaves and branches and can be hard to locate. Fortunately for birders, red-eyed vireos often sing their signature song nonstop, even on hot days when few other birds are singing. So study their song, go to a healthy wooded habitat, listen for the song, then scan with binoculars.

Red-eyed vireos forage for insects and spiders from the leaves of trees and shrubs. Vireos, in general, are famous for devouring leaf-eating caterpillars such as leaf-rollers and loopers, and for helping rescue forests during large outbreaks of caterpillars. They also eat small berries, such as elderberries, blackberries, Virginia creeper, sassafras, and dogwood. As with many other birds, they eat more insects during nesting season, when their growing young need a high-protein diet. They switch to more plant food as they prepare for fall migration. Once in South America, they eat fruits.

Common summer resident statewide. In Latin, the word vireo means “green,” or “having a youthful vigor”; these active, often greenish birds are both. Apparently, in the Old World, Latin speakers called one of their greenish birds this name, and it was later applied officially to our family of New World birds. The species name of the red-eyed vireo, olivaceous, means “olive-colored.” Many decades ago, vireos were often called “greenlets.”

Red-eyed vireos are present in Missouri April–September. They nest most successfully deep within large, uninterrupted tracts of hardwood forests with shrubby understories. On the branch of a small tree or large shrub, the female builds a cup nest of grasses and other fibrous materials, bound together and attached to the branch by spider webs. A clutch comprises 1–5 eggs, which the female incubates for 11–15 days. The young stay in the nest another 10–12 days. There can be 1 or 2 broods a year. Lifespan can exceed 10 years. These birds overwinter in South America, often migrating in large, mixed flocks.

Vireos are welcomed by orchardists and foresters, since they devour insects that eat tree leaves. They are also noted for their protracted dawn-to-dusk singing. It is something like a robin’s aimless warbling, but with a brighter timbre, and a little more space between each phrase. “Preacher bird” is one of its nicknames, for its interminable orations, whose phrases alternately upslur, as if asking a question, then downslur, as if giving the answer. Some have noted that during this performance, the perched vireo faces “first one way and then the other, as public speakers do in addressing a big audience.”

The brown-headed cowbird is a brood parasite, depositing its eggs in the nests of other bird species. The host raises the cowbird young, which hatch earlier and grow faster than their own young and often even force the host young from the nest. The young cowbirds consume much of the food brought to the nest, often causing the host’s young to starve. Parasitized vireo nests virtually never fledge any of their own young. One Missouri study found that up to 33 percent of vireo nests had cowbird eggs present. Parasitism levels vary depending on the nest’s distance from forest openings. Nests deep in large, unbroken forests sustain less parasitism, while those in fragmented forests interspersed with livestock and pastures — the habitat of cowbirds — are more heavily parasitized. 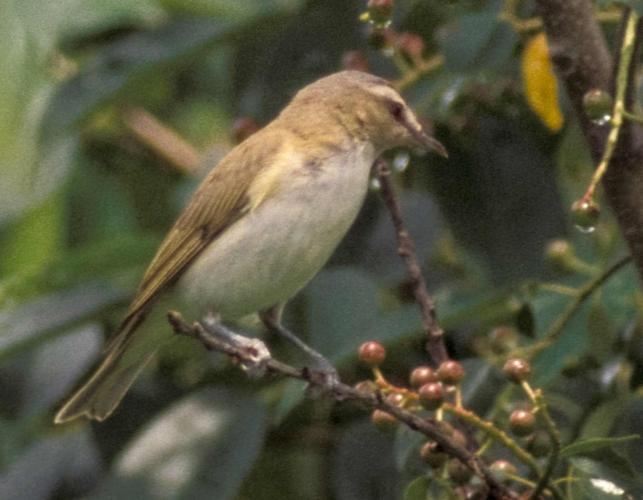 Caption
Even if you don't get a great view of the bird, you can easily identify the red-eyed vireo by its distinctive song.
1/2
Video file
Caption
Tuesday Tweet: Guess the Bird before the Video Reveal
Credit
MDC
Right to Use
2/2
Image 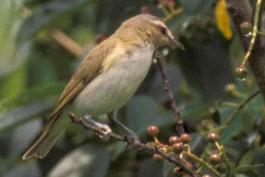