Bell’s vireo adult upperparts are grayish; the eye ring and lore (the region just in front of the eye) are indistinctly whitish, looking faintly like eyeglasses. The wing bars are whitish; the upper wing bar often is short, or indistinct, or absent. Underparts are whitish with some yellowish tones. The tail appears long because the wings are short. The song is a two-part series of jumbled, harsh notes. The first part “asks a question” and the second part “answers it,” because the first phrase ends in a rising tone and the second descends.

Similar species: The white-eyed vireo is similar in habits and song, but it is more assertively olive and yellow, has unmistakable white wing bars, and has yellow “spectacles.” Also, the eyes of adults have white irises, if you can get close enough to see them. Also, it is easy to confuse warblers with vireos. Be sure to check the bill on any slowly foraging, pale or drab-colored warblerlike bird, for it may be a vireo. The bill of the vireo is relatively thick, until the tip, and it has a small hook that can be seen from below. Warblers’ bills are narrow and taper to a sharp point. Flycatchers, too, can also be confused with vireos. Flycatchers have a chunkier body and somewhat crested or angled head shape, and typically flutter out from a perch to snatch flying insects, then return to the same perch.

Size
Length: 4¾ inches.
Where To Find 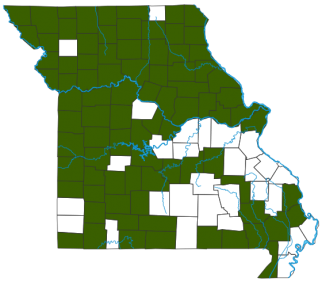 Prefers dense, shrubby areas, often in low vegetation near waterways or places where thickets of shrubs and small trees are beginning to take over.

Forages low in shrubs and dense thickets, briars, and brambles for insects, spiders, and fruits.

As a summer (breeding) resident, uncommon in the Glaciated Plains and Osage Plains (north and west portions of the state), rare and scattered elsewhere. The subspecies in the eastern part of the range (including Missouri) is Vireo bellii bellii, the nominate subspecies. A subspecies in Southern California, the least Bell’s vireo (V. bellii pusillus) is endangered. Habitat destruction from human development, and exposure to nest-parasitizing cowbirds, were primary causes for its decline. By the mid-1980s, only 300 pairs nested in that state, occupying only a small fraction of their former range. Fortunately, efforts to save this subspecies are showing some success, with both numbers and range expanding.

Life Cycle
Nests are built of grasses and other soft plant materials bound together with spider webs; they are lined with finer grasses and adorned on the outside with the egg cases of spiders. These bag- or basket-like nests are suspended by the brim from low branches in shrubs. A clutch comprises 3–5 eggs. Bell’s vireos can live to be at least 8 years old. They are present in Missouri May–August, then they spend the rest of the year in Mexico and parts of Central America.

John James Audubon named this vireo to honor John Graham Bell, a New York taxidermist whose shop was a hub for many naturalists in the middle 1800s. Bell and some other naturalists traveled up the Missouri River with the aging Audubon in 1843. One of the travelers, Edward Harris, wrote a journal of their adventures; titled “Up the Missouri with Audubon,” it was finally published in 1951.

Of Missouri’s vireos, Bell’s suffers the highest rate of parasitism by brown-headed cowbirds, which deposit their eggs into the nests of other birds. The host raises the cowbird young, which hatch earlier and grow faster than their own young and often force the young from the nest. The young cowbirds consume much of the food brought to the nest, often starving the host’s young. Thus cowbird parasitism commonly prevents vireos from reproducing successfully. Habitat is a major factor in cowbird parasitism: nests in fragmented forests, which are interspersed with livestock and pastures — cowbird habitat — are more heavily parasitized, while nests deep in large unbroken tracts of woods are less likely to be found by cowbirds.
Title
Media Gallery
Image 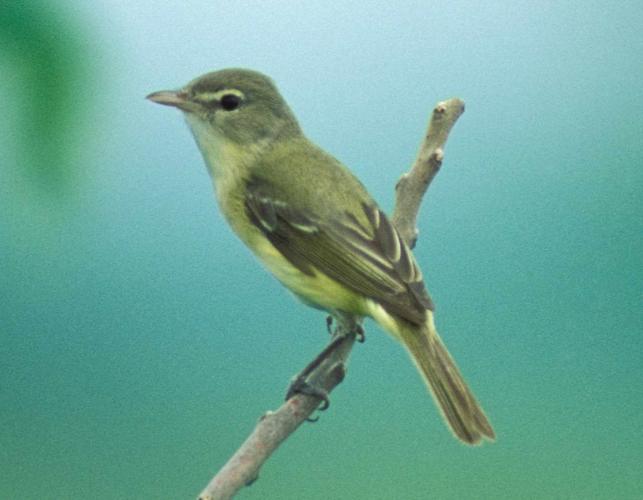 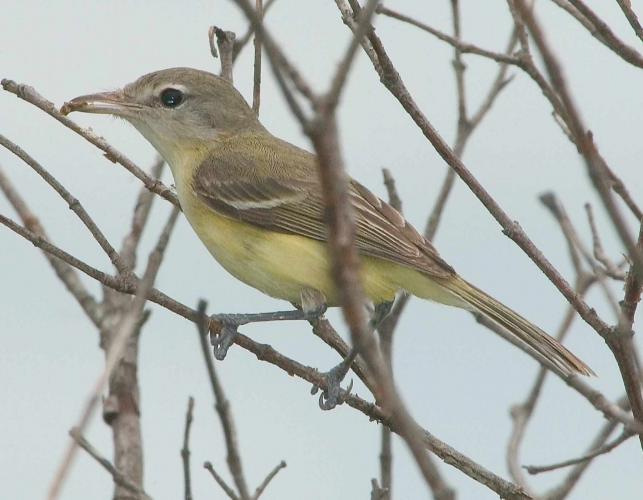 Caption
Bell's vireos have grayish upperparts; the eye ring and lore are indistinctly whitish, looking faintly like eyeglasses. The wing bars are whitish; the upper wing bar often is short, or indistinct, or absent.
Right to Use
2/10
Image 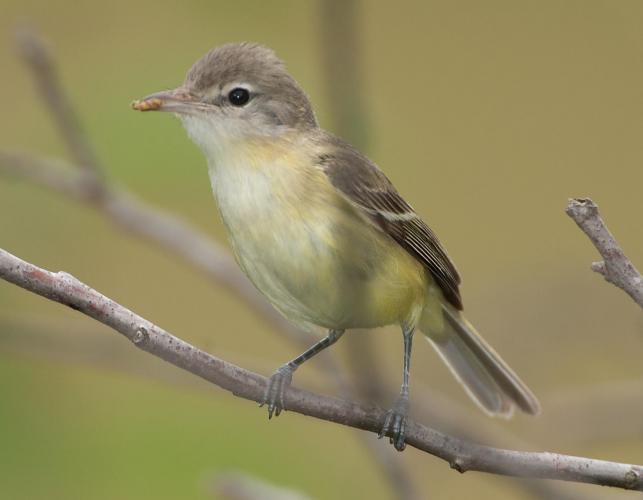 Caption
The underparts of Bell's vireos are whitish with some yellowish tones. The tail appears long because the wings are short.
Right to Use
3/10
Image 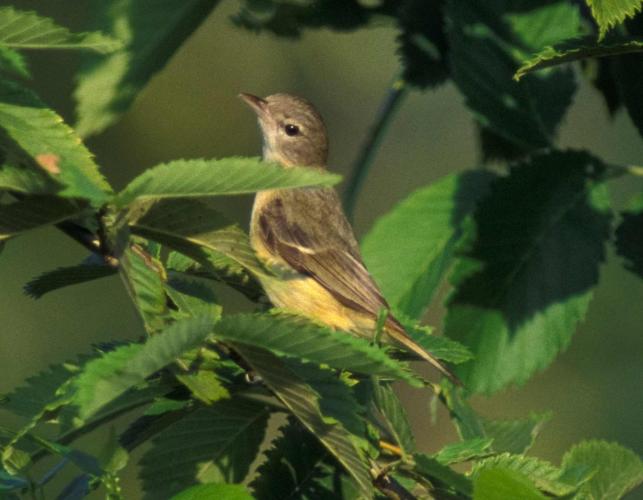 Caption
Bell's vireos sing a distinctive song. As with other vireos, you will probably hear one before you see it
Credit
Jim Rathert
Right to Use
4/10
Image 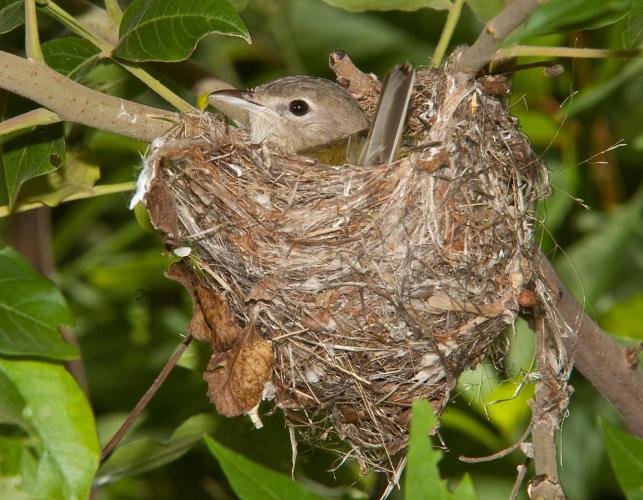 Caption
Bell's vireos build bag- or basket-like nests, which are suspended by the brim from low branches in shrubs.
Right to Use
5/10
Image 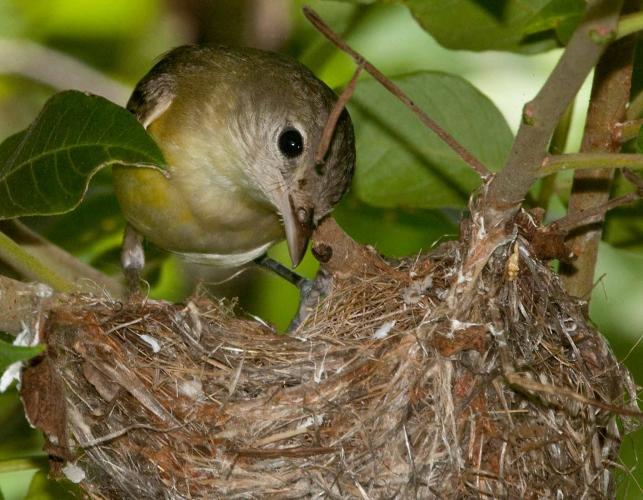 Caption
Of Missouri’s vireos, Bell’s suffers the highest rate of parasitism by brown-headed cowbirds, which deposit their eggs into the nests of other birds, usually preventing their hosts from reproducing successfully.
Right to Use
6/10
Image 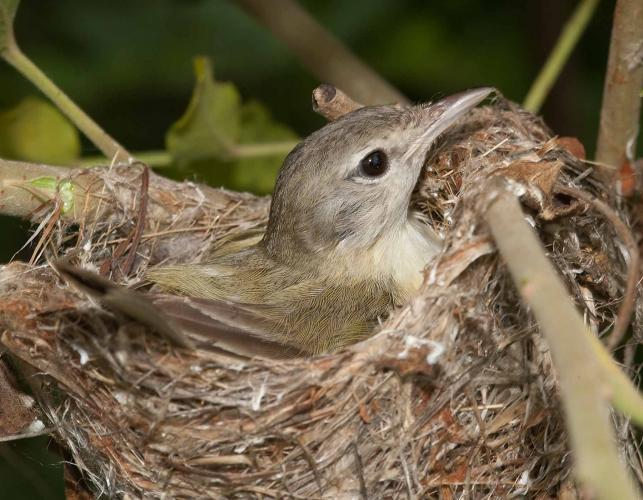 Caption
Bell's vireos are present in Missouri May–August.
Right to Use
7/10
Image 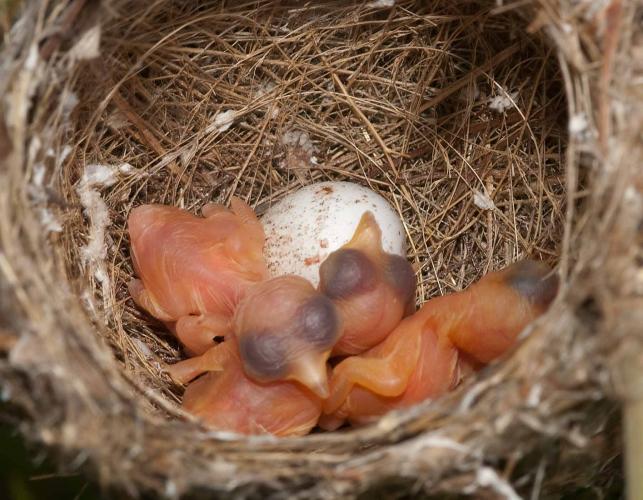 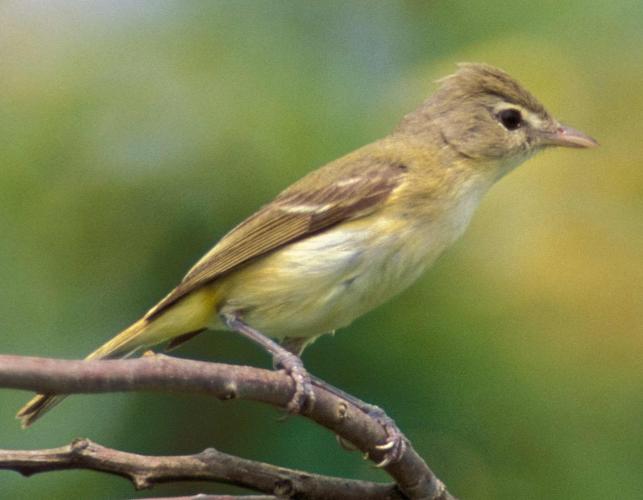 Caption
John James Audubon named the Bell's vireo to honor John Graham Bell, a New York taxidermist whose shop was a hub for naturalists in the middle 1800s.
Credit
Jim Rathert
Right to Use
9/10
Image 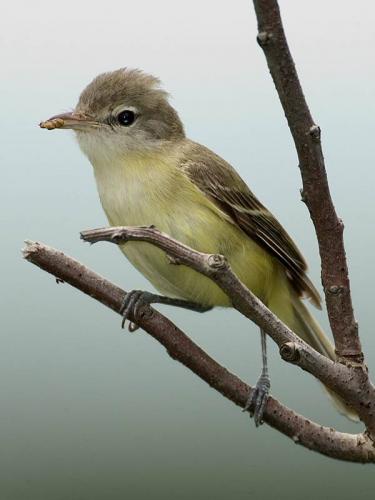 Caption
The Bell's Vireo has an eye-ring as a distinguishing feature.
Credit
Missouri Department of Conservation
Right to Use
10/10
Image 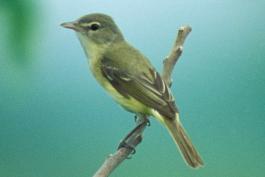 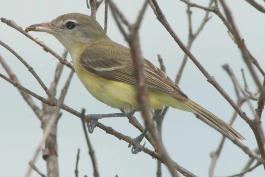 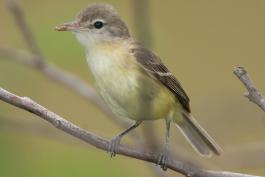 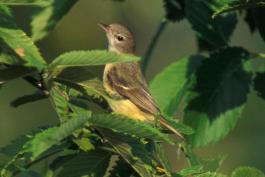 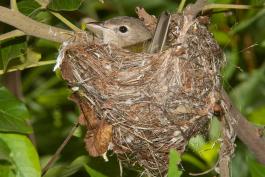 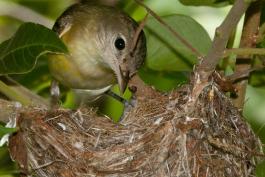 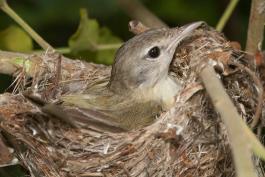 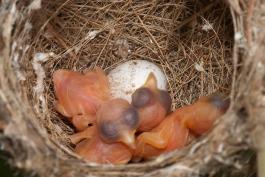 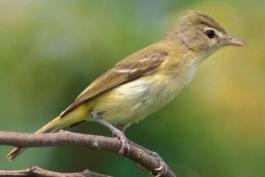 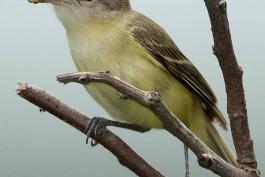 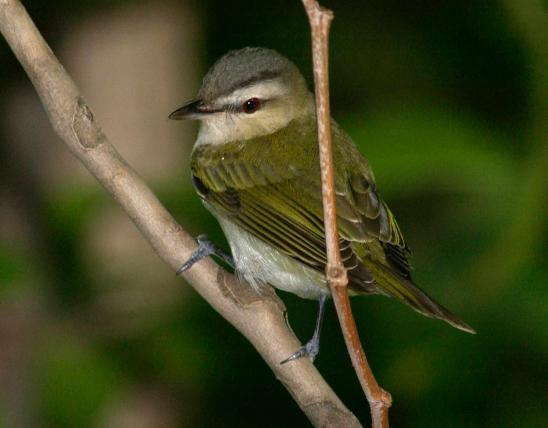 Red-Eyed Vireo
About Birds in Missouri
About 350 species of birds are likely to be seen in Missouri, though nearly 400 have been recorded within our borders. Most people know a bird when they see one — it has feathers, wings, and a bill. Birds are warm-blooded, and most species can fly. Many migrate hundreds or thousands of miles. Birds lay hard-shelled eggs (often in a nest), and the parents care for the young. Many communicate with songs and calls.
Related Content
Bats