Adult pine warbler upperparts are unstreaked olive green, with two white wing bars and a relatively long tail. Underparts are white, with a yellow throat and the breast with diffuse olive streaks on the sides. The yellow throat color extends along the side of the neck, clearly accentuating the darker cheek (auricular) area. The bill is large and the legs are black. Voice is a loud, sweet, chipping trill lasting a few seconds, more musical and slightly slower than that of the chipping sparrow, which commonly occurs in the same habitat and with which it is easily confused. Call is a musical chip.

Similar species: Blackpoll and bay-breasted warblers, in their fall plumages, can be confused with pine warblers, but they are rarely seen in Missouri in the fall. Yellow-throated vireos have thicker bills, and a more pronounced yellow eye ring and yellow line in front of the eye (resembling eyeglasses). Chipping sparrows and dark-eyed juncos also have a steady, chipping trill, but they look quite different. Chipping sparrow songs are usually faster, dryer, and more driving and machinelike. 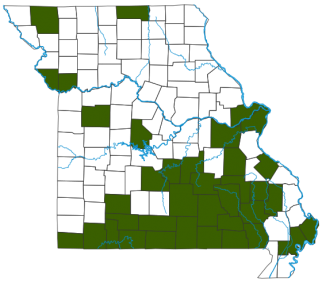 Common, but local, in piney areas in southern and southeastern Missouri. Although it is present year round in Puerto Rico and breeds as far north as southern Ontario and Quebec, this species lives almost entirely within the United States. It does not fly south of our country for the winter.

Found in pine woodlands, pine-oak forests, and mature pine plantations. This and several other species are adapted to pine savanna habitat. Pine savannas are transitional between prairie and woodland — the ground cover resembles prairie, but with an open canopy dominated by our native shortleaf pine, and with midstory trees mostly absent. Pine savannas used to be much more common in our state, but drastic logging of pines in the early 1900s and decades of suppression of natural fires has caused these to dwindle.

Creeps along branches searching for insects and spiders. It also catches flying insects. During the rare times it appears in winter in southernmost Missouri, it occasionally visits birdfeeders for suet, sunflower seeds, and peanut hearts. This species eats a lot of pine seeds, too, especially in winter, and not many other warblers eat seeds at all. Their habit of eating seeds probably explains their heavier-than-usual bill.

Common but local summer resident in southern Missouri; as winter resident, rare in southern Missouri. Since about the middle 1800s, this and nearly 30 other wood-warblers made up the genus Dendroica, but in 2010 evidence from genetic research convinced most ornithologists that genus Dendroica and genus Setophaga could not logically be kept separate. Before the two genera were merged, the only member of genus Setophaga was the American redstart. But because Setophaga was the older of the two genus names, it had precedence according to the laws of scientific naming, so the names of all the Dendroica warblers were changed to Setophaga.

The female builds a small cup nest out of grass and other plant materials, fixing them together with spider webs or silk from caterpillars, similar to the way hummingbirds build nests. The nests are usually high in a pine tree and hidden among clusters of needles and cones. There are usually 3–5 eggs per clutch; these are incubated for 10–13 days, and after another 10 days they are ready to start leaving the nest. Pine warblers are present year round in the southeastern United States, but their summer breeding range extends into Canada, New England, and the Great Lakes region. They are absent from much of Missouri, Illinois, Indiana, Ohio, and Iowa because those places don’t have large tracts of pine woods.

Human activity in the last few hundred years has altered or destroyed many of the pine woodlands in the eastern United States, but human efforts to restore those habitats have shown promise in undoing the damage. It may take another 50–100 years of sustained effort to restore the full diversity of these habitats. This requires social and political commitment to conservation.

Pine warblers are fairly tolerant of mixed forests containing pines, oaks, and other trees, but other birds, such as Bachman’s sparrow, red-cockaded woodpecker, and brown-headed nuthatch, require pine savanna habitat to live, and they are mostly extirpated from our state. Current and long-term efforts to restore pine savannas may eventually bring back these species. It will also help populations of northern bobwhite, yellow-throated warbler, Carolina chickadee, and chipping sparrow. 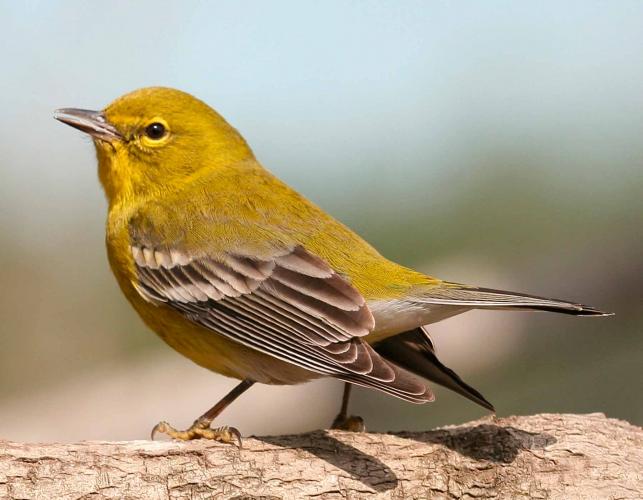 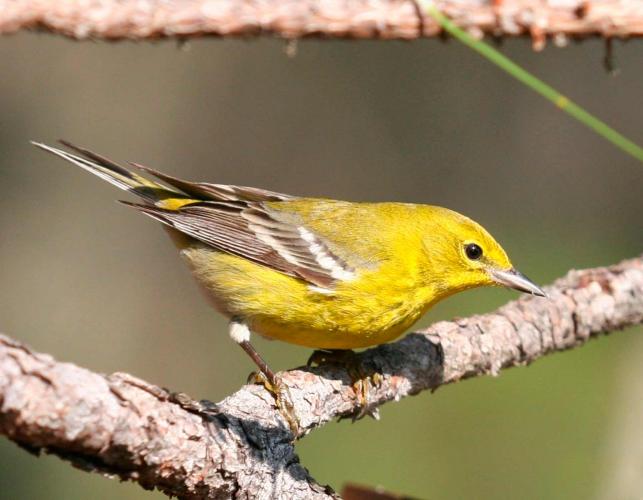 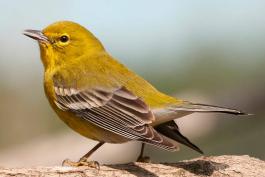 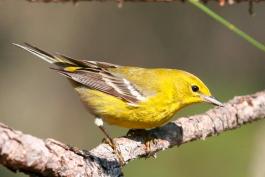 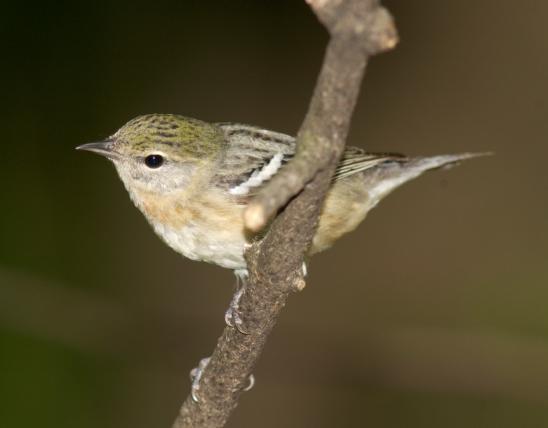 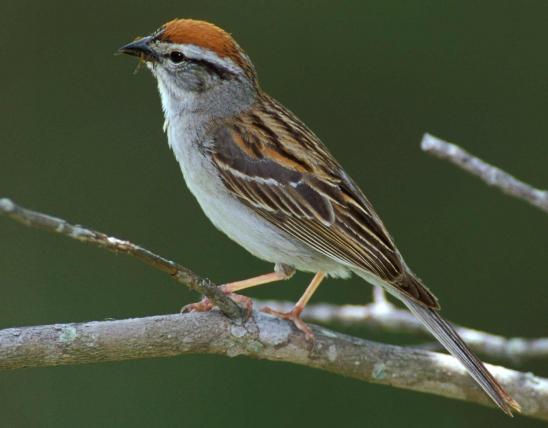 Chipping Sparrow
About Birds in Missouri
About 350 species of birds are likely to be seen in Missouri, though nearly 400 have been recorded within our borders. Most people know a bird when they see one — it has feathers, wings, and a bill. Birds are warm-blooded, and most species can fly. Many migrate hundreds or thousands of miles. Birds lay hard-shelled eggs (often in a nest), and the parents care for the young. Many communicate with songs and calls.
Related Content
Bats