Adult northern parula upperparts are blue-gray, with a greenish yellow patch on the back. There are two white wing bars, and the tail is short. Underparts are white, with a yellow throat and upper breast. Male has black and chestnut bands on the yellow breast. There are two common song types. The Type A song is a rapid, buzzy, rising: ti-ti-ti-ti-ti-ti-ti-ti-ti-ti-tit, with a emphasized lower note at the end. The Type B song may be given on one tone, usually contains several types of vocalizations, and may closely resemble the song of the cerulean warbler. Song patterns can also be confused with those of the blue-winged warbler. The call is a sweet chip.

Similar species: Other summer resident warblers that are blue-gray above include the cerulean warbler (has no yellow), yellow-throated warbler (white eyeline, black sides to face), and blue-winged warbler (yellow head; black eye line).

Inhabits forests along small streams and large rivers as well as in forest openings away from water. Typically seen high in the forest canopy.

Forages among leaves and branches for insects and spiders in trees, often searching in dead leaf clusters, hanging upside down like a chickadee.

Common summer resident. The wood-warbler genus Setophaga used to be much smaller, but recent genetic research has led scientists to lump together many American warblers into this genus. So this bird, formerly in genus Parula, is now in genus Setophaga. But the common name “parula” endures. Oddly enough, although the genus Parula no longer exists, the wood-warblers, as a family, are still called the Parulidae. By the way, the name Parula is derived from Parus, the European genus of birds (called tits) in which Linnaeus initially placed our American parulas. When they separated the two groups, biologists had to create a new genus name, so they added the “-ula” suffix, which means “small”; so “Parula” denotes “small Parus.”

Present in Missouri from April through early October. Cup nests are built very high in trees at the branch tips, positioned within a clump of hanging mosses or lichens or other materials suspended among the branches. In the South, they nest in clumps of Spanish moss. Clutches comprise 2–7 eggs, which are incubated 12–14 days. Young can leave the nest about 10 or 11 days after hatching. There can be 1 or 2 broods. A northern Parula can live to be at least 5 years old. Winters are spent in Central America and the West Indies.

This is one of the bird species that is often killed in collisions with communication towers and other structures during migration. Nesting territory may have been diminished significantly in some regions because of air pollution reducing the availability of mosses and other epiphytes these warblers need for nest sites. Habitat loss has also decreased their numbers in some areas.

Migratory birds have roles in all the habitats and regions they pass through. It is important to protect all the ecosystems they require, whether it is the breeding territory, wintering grounds, or the stopover places in between. This often calls for international cooperation. 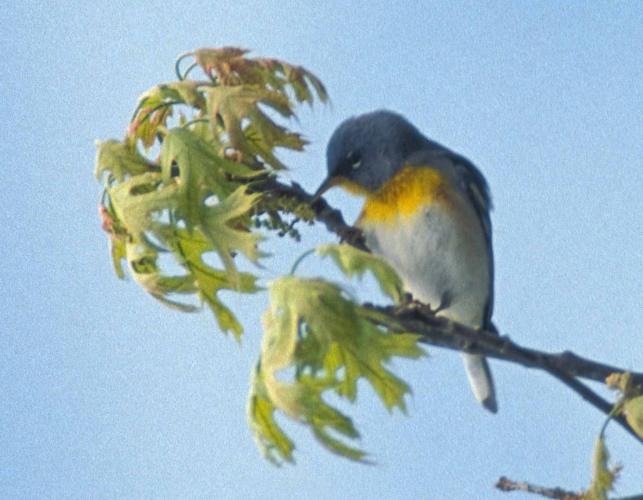 Caption
The northern parula is blue-gray above, with two white wing bars; the tail is short. Underparts are white, with a yellow throat and upper breast.
Right to Use
1/3
Image 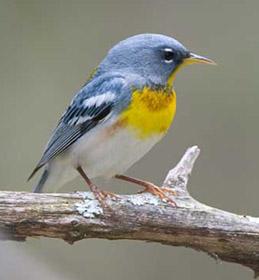 Caption
The northern parula is a small summer resident warbler with gray-blue upperparts, two white wingbars, and a greenish-yellow patch on the back.
Credit
a
Right to Use
2/3
Image 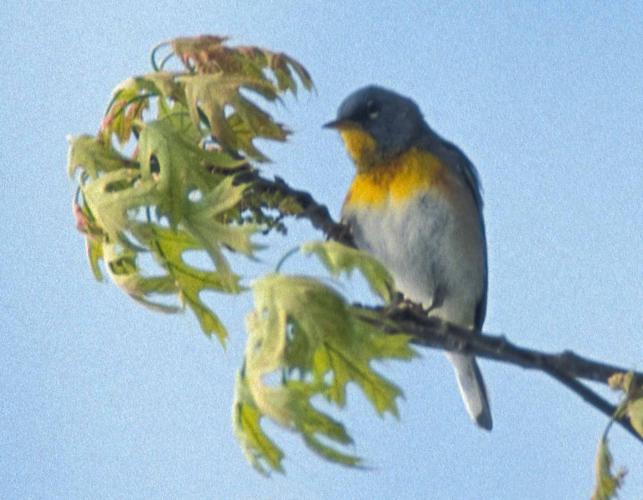 Caption
Male northern parulas have a two-colored dark band across the yellow chest: a dark band above a reddish one.
Right to Use
3/3
Image 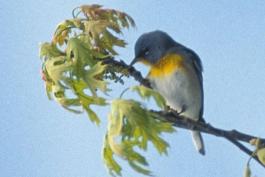 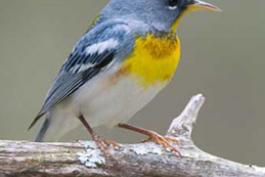 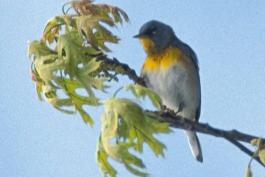 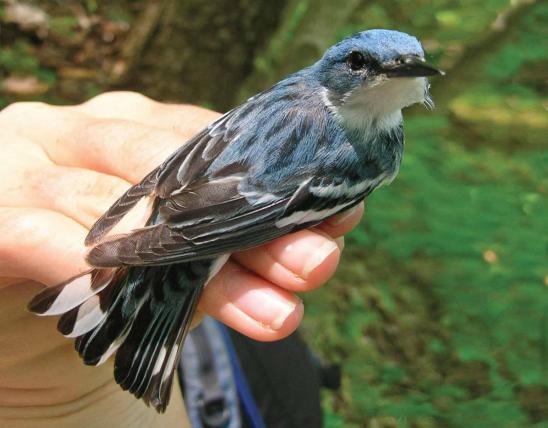 Cerulean Warbler
About Birds in Missouri
About 350 species of birds are likely to be seen in Missouri, though nearly 400 have been recorded within our borders. Most people know a bird when they see one — it has feathers, wings, and a bill. Birds are warm-blooded, and most species can fly. Many migrate hundreds or thousands of miles. Birds lay hard-shelled eggs (often in a nest), and the parents care for the young. Many communicate with songs and calls.
Related Content
Bats