Similar species: Heart-leaved golden Alexanders (Z. aptera) is scattered mostly south of the Missouri River. Its basal leaves are most often simple, less often once-ternately lobed or compound. Meadow parsnip (Thaspium trifoliatum) is also quite similar. It can be distinguished by its having the middle flower in each umbel slightly raised, on a little stalk. The middle flower in golden Alexanders is mostly stalkless and recessed. A surer way to distinguish between them is to examine the fruits: Those of Thaspium are strongly winged, while those of Zizia are unwinged or only ribbed or slightly winged.

Size
Height: to 2 feet.
Where To Find 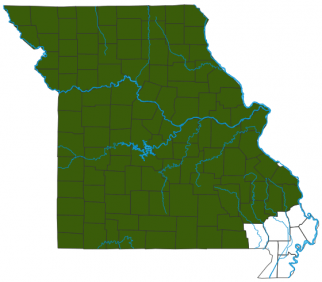 Statewide, but apparently absent from the Mississippi Lowlands.

The name “golden Alexanders” refers to another member of the carrot family, a European species popular as an edible and medicinal herb from Roman times through the Middle Ages, called Alexanders (Smyrnium olusatrum; Medieval scholars called it Petroselinum alexandrinum). That plant apparently was named for the ancient city of Alexandria in Egypt, where it was believed to have originated. The city was named for the Greek king Alexander the Great.

This species can be grown easily in gardens from seed, and the foliage and flowers are quite attractive. However, if allowed to produce seed, it can become overly aggressive.

The carrot family includes 57 native and introduced species in Missouri. Gardeners are familiar with several cultivated species such as dill, parsley, carrot, celery, fennel, and cilantro. The characteristic flower clusters (umbels) are visited by many bees, flies, butterflies, and other insects.
Title
Media Gallery
Image 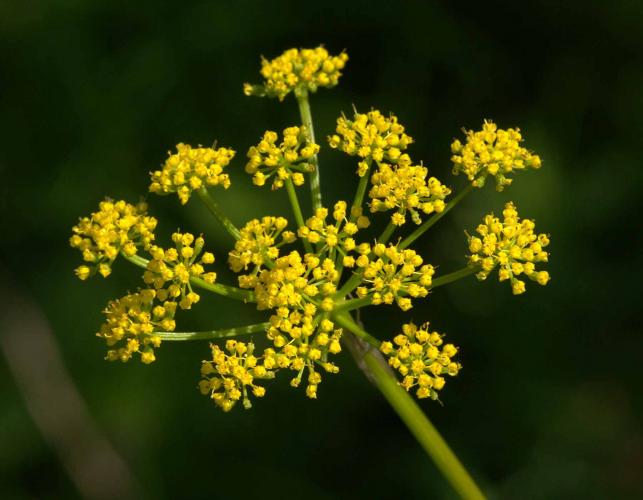 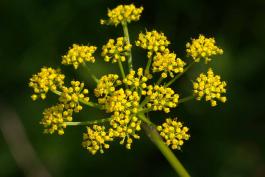