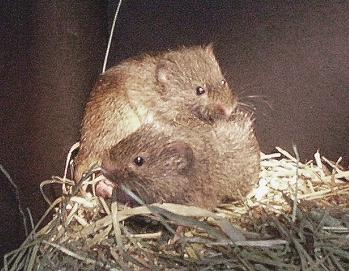 The Wildlife Code of Missouri specifies that damage-causing voles may be trapped or shot to prevent further damage. Refer to 3 CSR 10-4.130 Owner May Protect Property; Public Safety of the Code for details and restrictions.

Hardware cloth cylinders exclude voles from seedlings and young trees. The mesh should be one-quarter inch or less in size. Bury the wire 6 inches deep to prevent voles from burrowing under the cylinder.

Eliminate weeds, ground cover, and litter in and around crops, lawns, and cultivated areas to reduce the capacity of these areas to support voles. Lawn and turf should be mowed regularly. Mulch should be cleared 3 feet or more from the bases of trees.

Fumigants and repellents are not recommended because none are known to be effective. Mothballs are not effective and the naphthalene they contain is toxic and the vapor harmful to humans. Zinc phosphide is the most commonly used toxicant and is available in pelleted and grain bait formulations. Place by hand in runways and burrow openings to minimize exposure to non-target species. When using toxicants, take necessary measures to ensure the safety of children, pets, and nontarget animals.

Mouse-sized snap traps can be used to control small populations. Place the trap next to the runway with the trigger-end in the runway. Bait with a peanut butter-oatmeal mixture or apple slices.

While possible, not a practical option.