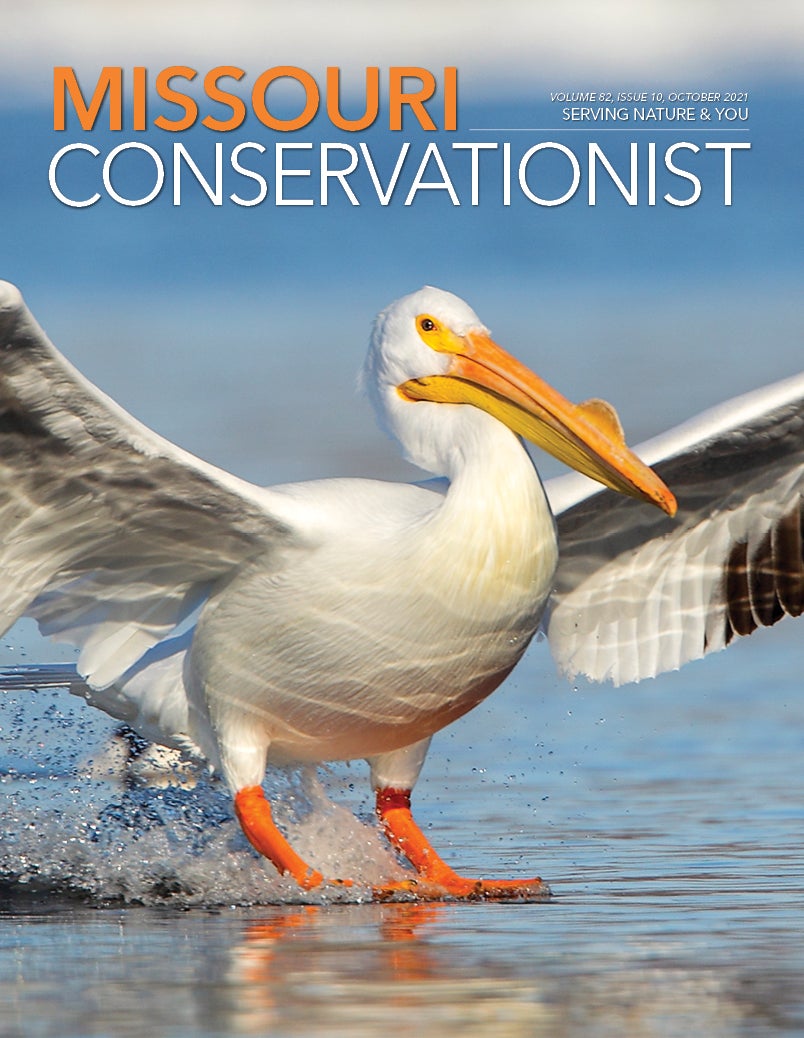 The unusual formation on this deer’s right antler is commonly referred to as “palmation.” Although palmation is typically a genetic trait passed to offspring, it also can be caused by injury. Palmation is relatively rare but can be found in some populations of white-tailed deer with this recessive trait.

However, it’s possible this antler formation may be due to a previous injury and not genetics.

“Genetic abnormalities typically occur in both antlers instead of having one typical antler and one atypical,” MDC Deer Biologist Kevyn Wiskirchen explained. “For that reason, I’m inclined to think this is a result of injury to the body of the deer or to the antler itself while it was growing during the summer. In either case, injury can disrupt blood flow to growing antlers, causing a whole host of abnormal growth patterns.”

Q: I have an American toad near my home. He seems to live under my deck when it is warm. What does he do to survive the winter? Could I house him in a terrarium and feed him insects?

When cold weather comes, most American toads (Anaxyrus americanus) dig backwards and bury themselves in the dirt below the frostline of their summer homes. With no ability to tolerate frigid temperatures, overwintering usually begins in October.

Found statewide, these toads tolerate humans well and are common in gardens, fields, and lawns. During the day, they hide under rocks where there is loose, moist dirt or burrow into depressions where dead leaves have accumulated. Toads have knobs on their back feet that they use to shove dirt aside. With a few firm kicks of their hind legs and by wriggling their torsos, they carefully scooch themselves into loose soil.

There’s no need to keep one as a pet; they live several years in the same location. You’ll probably see the toad again in the spring. For more information, visit short.mdc.mo.gov/Z9a.

Q: Last October while backpacking along the Ozark Trail through the St. Francois Mountains, we were overwhelmed by a swarming number of walkingstick insects. Why were their numbers so high?

“We have this happen in Missouri every now and then — maybe every few years — somewhere in the state,” said MDC Forest Entomologist Robbie Doerhoff.

Walkingsticks are like any other insect population: They go through cycles of high and low numbers, influenced by weather, predators, parasites, and food sources.

Since many insects, including walkingsticks, reach maturity in the late summer and fall, they become more noticeable around that time. It’s not uncommon to see high populations in locations where suitable habitat is plentiful.

All walkingsticks are herbivores. They use their strong mandibles to consume leaves, the primary food in their diet. Walkingsticks can cause noticeable defoliation on trees and forests during years of population explosions. However, since the defoliation occurs late in the season, it usually isn’t a concern for tree health.