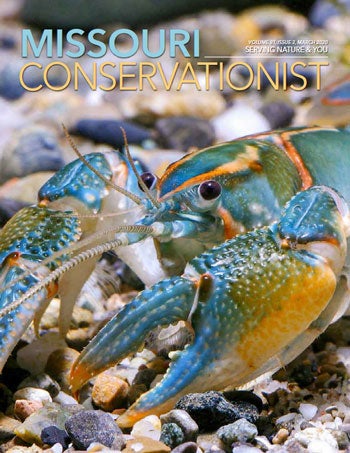 If you’ve ever put your toes in the water of a Missouri stream on a hot summer’s day, chances are you’ve seen a crayfish scuttle by — maybe to the safety of a big rock or a fallen log or simply looking for something to eat. Missouri watersheds are full of different kinds of fresh water crustaceans. Most crayfish species can be found in plain sight, zooming around your toes in a stream or pond on a sunny afternoon. But a small group of crayfish are shy, carving out a more private and solitary life in places where we might not expect, like out of the water.

Nature is funny in that some of the more important species can be hard to locate, don’t conform to normal patterns, and are often overlooked or not given enough credit. Burrowing crayfish are one such species group. These “burrowers” spend most of their lives on land, or rather, burrowed into the land. Because they live under the radar and are not often observed, we were slow to notice and learn about them. Only recently have detective-like scientists started to measure and understand the contributions of these particularly secretive burrowers to our ecosystems.

First, why and how would crayfish — who have gills — want to be out of the water at all?

These burrowing crayfish are called “ecosystem engineers.” Like beavers, who modify and build habitats to better suit their needs, crayfish modify their surrounding environment, create a specialized role for themselves, and often provide habitat for other animals and plants. Burrowers often excavate and inhabit tunnels (burrows) near surface water like streams, ponds, marshes, and even human-made ditches. They dig down into the soil until they reach the water table and use underground water for moisture and breathing.

While these burrowing crayfish spend most of their lifecycle in the burrows they build, they do venture forth seasonally to forage and find mates.

Missouri has seven known species of burrowing crayfish, and these incredible adaptive crustaceans occur in every part of our state. The problem for these special mudbugs is that as we are learning about them, we are also learning that some of them are species of conservation concern. A species of concern is one that may need more concentrated conservation attention to help it thrive.

Crayfish are called “keystone” organisms because their presence greatly benefits the health and stability of the ecosystem they inhabit. Crayfish are a vital food source to many creatures.

Over 208 other species, including birds, fish, amphibians, reptiles, and even mammals, eat crayfish. Missouri prairie dwellers, such as the federally threatened and state endangered eastern massasauga rattlesnake and Graham’s crayfish snake, prey on burrowing crayfish. Catfish, Missouri’s most popular river sport fish, also eat crayfish. In fact, one study found that crayfish made up almost half of the channel catfish’s diet in the Yockanookany River in Mississippi, and most of those appeared to be burrowing crayfish. They also provide meals for Missouri wetland occupants, such as ducks and wading bird species like herons and rails.

Like all crayfish, burrowing crayfish decompose dead and decaying organic matter into finer materials that can be eaten by other organisms in their community, thereby upcycling nutrients back into their ecosystems.

In addition, the burrowing crayfish’s burrow provides habitat for several species of snakes, frogs, toads, amphipods and isopods, nematodes, spiders, insects, and mammals. Several snakes even hibernate in these burrows. Crayfish burrows provide a nice place to rest or hide, but during drought they can be a lifesaving refuge for salamanders and dragonflies, including the endangered Hines emerald dragonfly.

Integral to the Community

Burrowing crayfish also provide services that more directly benefit their human neighbors. Their excavation projects improve plant life in Missouri’s grasslands (including prairies) and river and wetland floodplains. One study showed that Missouri’s prairie crayfish burrow to depths greater than 3 feet, while other species’ burrows extend to 15 feet. This deep digging improves subsurface waterflow and soil structure by mixing and moving nutrients closer to the surface where they can be used by many plant species. Better soil means better farming, and more diverse plant communities with strong root systems means less erosion, which has many positive effects for humans. And with their enhancement of subsurface waterflow, our burrowing neighbors have created natural irrigation systems that operate both horizontally and vertically. That’s right, they don’t just dig straight down. While some burrowers dig relatively modest burrows, with a single tunnel and chamber about 1 foot from the soil surface, other burrowers are skilled architects that build many tunnels and chambers down to 15 feet below the soil surface. Most burrowers also design and build their chimneys to better regulate air flow and water in their subterranean homes, not unlike humans. One burrowing crayfish species that was studied brought over 7 tons of soil per acre per year to the surface, mixing the entire soil surface in a three-year period.

That’s a lot of digging for a creature that can fit in a can of soda or a garden trowel. And a lot of work that farmers and land managers don’t have to put into the land to make it productive for crops, grasses, or cattle.

If these crayfish are so hard working and so important, how did we miss them for so many years? As mentioned earlier, burrowing crayfish don’t simply dig straight down, they create a vast network of burrowing tunnels underneath the soil surface, so that in the past, surveys often underestimated the number of crayfish or missed them entirely. These are a very elusive and secretive crayfish who don’t emerge from their burrows very often. Consequently, up until recently, we’ve underestimated the significant contributions of these burrowers to our ecosystems.

But even when we rarely observe a species, we can often see the effects of its greater presence in the ecosystem. In this way, MDC biologists who study such habitats (wetlands, prairies, floodplains) worked a little backwards — toward the burrowing crayfish — like seeing a shadow and not the person. MDC biologists could see this ecosystem shadow of the burrowing crayfish and wanted to know more. Even as burrowing crayfish remained very secretive and elusive to the scientists, their ecosystem services became increasingly evident and impossible to dismiss. Crayfish burrows have been shown to expedite subsurface movement of water through otherwise poorly drained soils at rates greater than could be attributed to any other burrowing organism. So, while these engineers were hard for scientists to find and quantify, their contributions could not be ignored.

This lack of knowledge surrounding burrowers ends this year with MDC’s first-ever research study dedicated specifically to them. MDC biologists and our partners at the University of Illinois will survey a portion of southern Missouri for crayfish, so we can get a more accurate picture of the species and their population distributions. Since this study was requested by wildlife managers who wish to learn which land management practices promote burrowing crayfish populations, we will also investigate the effects of some specific practices, such as controlled burning or water-level management. The more MDC biologists learn about these highly secretive species, the better we can fully understand their role in our ecosystems and how to conserve and manage them for future generations.

To protect and manage the burrowing crayfish, we must answer questions about their lifecycle, their habitat, and range. What soil densities and varieties do they prefer? What kind of water bodies, water levels, and plant communities best suit them? How do wildfires and controlled burns affect the presence of burrowing crayfish? Scientists have only scratched the surface of what we need to know regarding this mudbug — but soon these and many other questions can begin to be answered.

It’s exciting to meet an old new neighbor, and to know that new discoveries are waiting in our own backyard. MDC biologists are ready to help us understand these burrowers, their unique and secretive lifestyle, and all they do for us and other creatures. Science is always expanding our knowledge of the natural world. But it is especially wonderful when research can shine a light on a little-known and unsung habitat hero.

Many species of burrowing crayfish emerge from their burrows only during wet seasons. They might search for a mate or forage on nearby plant matter. Others will hunt for a meal by sitting just outside of their burrow entrance, hoping to ambush unsuspecting prey that might walk by.

Burrowing crayfish often build “chimneys,” made of excavated soil at their burrow entrances. Chimneys can act as passive ventilation structures, where fresh air is drawn down into the burrow from an entrance with a lower chimney and exits through a second entrance with a taller chimney. This is like prairie dogs who build their burrows with one entrance located higher than the other for ventilation. Experiments suggest that chimneys release chemical cues that attract juvenile burrowers to burrows made by adults of the same species rather than to those of other species or chimneys made by human hands.

Burrowing crayfish burrows are more complex than they appear at the surface; extending to and often well below the water table

*Probably occurs in other regions. 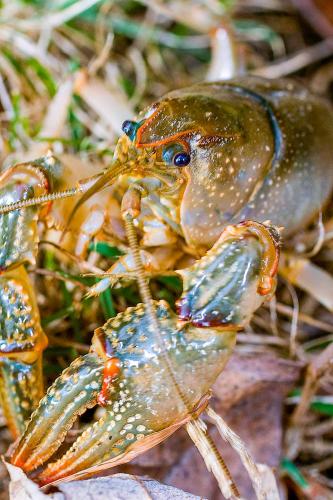 Credit
Guenter A. Schuster
Right to Use
1/7
Image 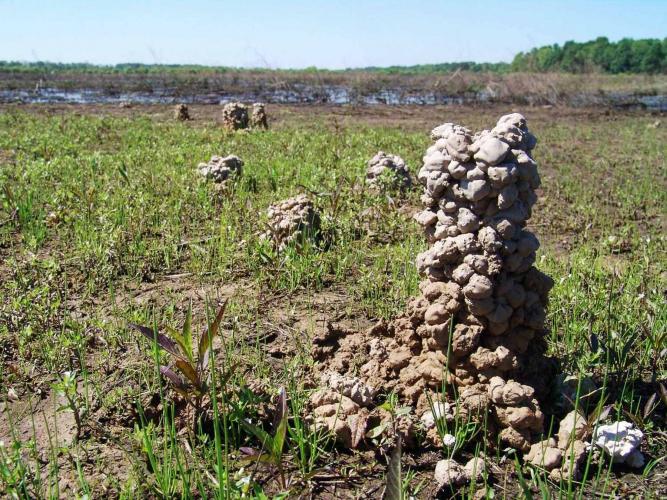 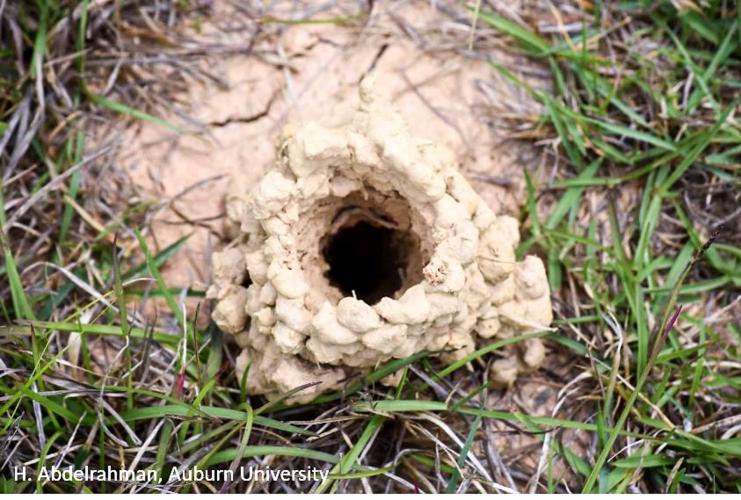 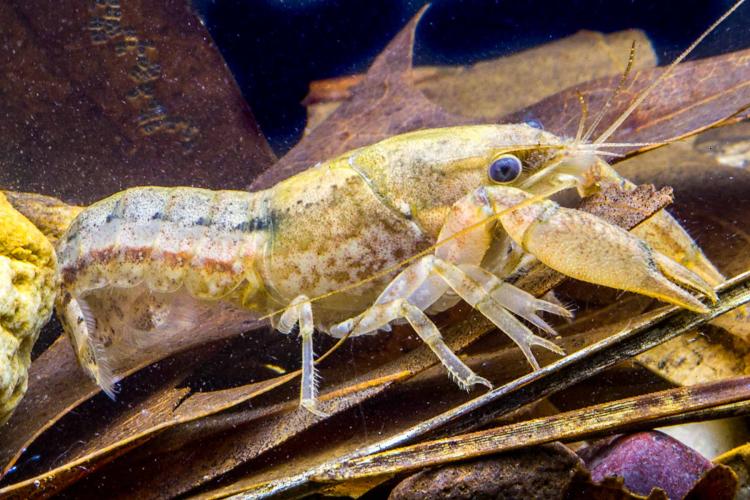 Credit
Guenter A. Schuster
Right to Use
4/7
Image 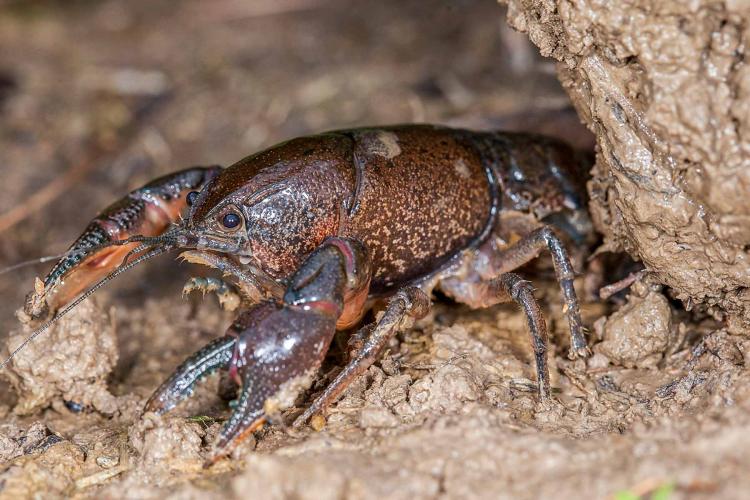 Credit
Guenter A. Schuster
Right to Use
5/7
Image 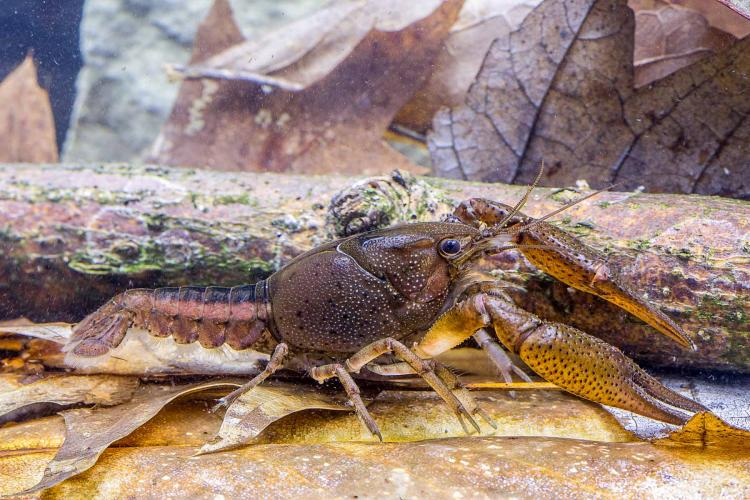 Credit
Guenter A. Schuster
Right to Use
6/7
Image 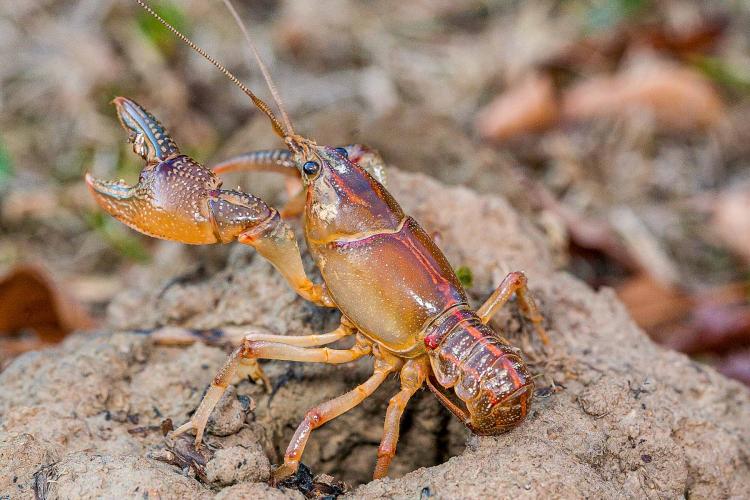 Credit
Guenter A. Schuster
Right to Use
7/7
Image 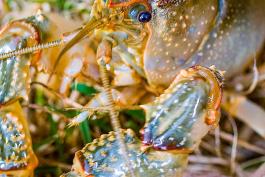 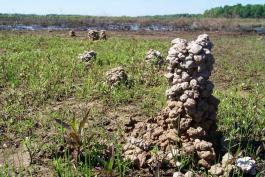 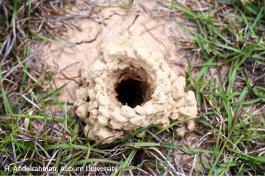 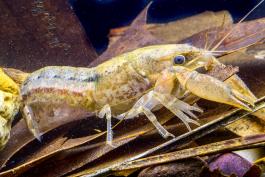 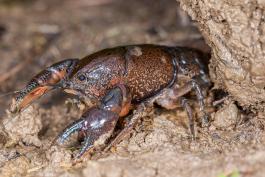 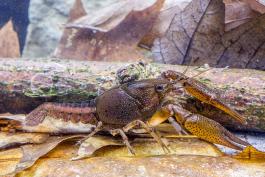 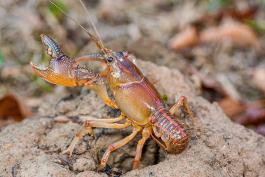 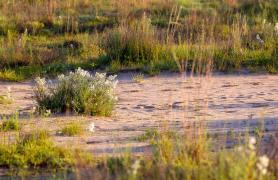 A River Ran Through It
THIS CONTENT IS ARCHIVED
Body
How the mighty Mississippi influenced Missouri’s most diverse region.
Media 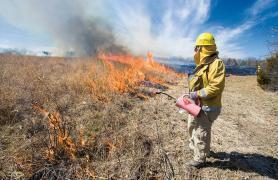