By Brett Dufur, photographs by David Stonner | May 23, 2016
From Missouri Conservationist: June 2016 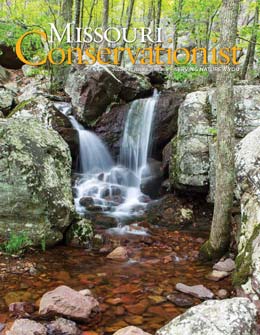 It’s a blustery October morning. Liz Doubet and I are on a remote, willow-covered riverbank, hard at work on a River Relief cleanup.

“Dinosaur!” she exclaims. I’m there in a second, and lo and behold, we’re looking at the remains of a dinosaur, mostly buried under eons of sand. Sure enough, we can make out its facial features. Ever since I was a kid, I’ve dreamed of digging up a dinosaur. But this dinosaur is purple and is made of plastic. I think it’s a kid’s sandbox.

The brittle purple dinosaur starts to break apart in my hands as we tug against the buried reptile from the Plasticene era. Half a dinosaur is better than none, I tell myself. Liz, on the other hand, is determined to get it all, even though trees have taken root on top of it. She starts digging it out with a canoe paddle. As a long-time River Relief volunteer, removing river trash is a personal mission. She is like a warrior on a crusade.

While she shovels frantically, I step back and take stock of the scene. A dozen beached canoes are scattered along a 300-yard wing dike on the Missouri River, just upstream from Eagle Bluffs Conservation Area. Volunteers wrapped in winter garb are combing the banks of this backwater area, which was scouted earlier by River Relief staff.

The spot is inaccessible to their normal “plate boats,” which are large aluminum johnboats that can carry tons of trash. This canoe-based cleanup allows volunteers to get higher up into these pockets of trash, where there are lots of old bottles, plastic bags, and dinosaurs. Once the dinosaur extraction is complete, we head into thicker stands of willow. Every one of us has the giddiness of a treasure hunter, except on this hunt the treasure is trash.

“Check this out!” My 9-year-old daughter, Naomi, discovers a massive, unbroken light bulb, almost the size of her head. Somehow it has floated possibly hundreds of miles and miraculously stayed intact. She holds up a glass soda bottle with equal excitement. I realize she is from a generation of plastic. Glass was mainly from my generation.

River Relief’s t-shirt says, “Good, trashy fun,” and it’s true. All 60 volunteers, along with the River Relief staff, are out having fun, enjoying a late fall day on the river and the challenge of cleaning up one more pocket of trash. Everyone is shouting encouragement and sharing finds. The mood is part party and part get ’er done. It is a river rat reunion. Sure, there are newbies, but their spirit and passion are the same.

We All Live Downstream

In 15 years, Missouri River Relief has evolved from a gaggle of river gypsies determined to clean up the river to a well-oiled, seasoned not-for-profit. River Relief was inspired by an early partnership with Chad Pregracke’s Living Lands and Waters. Chad inspired a movement that has spawned successful river cleanups on the Missouri, Mississippi, and Ohio rivers. River Relief focuses its efforts on the Missouri River. Progress is often measured in decades, but out here, progress is measured one discarded water bottle at a time. So far, volunteers have pulled 1.7 million pounds of trash from the Missouri River and its banks. Some of it is predictable, some of it not.

To date, River Relief has conducted more than 150 river cleanups, making a visible and lasting difference in more than 30 river communities. More than 22,500 volunteers have hauled tons of trash from 1,088 river miles.

Close to 20,000 students and teachers have taken part in more than 100 river education events. River Relief has also been involved in many water monitoring, planting, and habitat restoration projects.

It's Not Just About the Trash

River Relief isn’t just after your trash. You might say the organization also wants your mind.

“Volunteers love the feeling of accomplishment from seeing an area strewn with trash turn into an immaculate piece of riverbank,” says Steve Schnarr, River Relief’s program manager. “Plus, people just love getting out on the river and working with other positive people. “I can’t tell you how many times I’ve heard people leave a cleanup saying, ‘I’m never buying a plastic bottle again.’ Part of what we do at a cleanup is help people realize that most of this trash was not dumped right there on the river. Most of it has washed into the river from streets and communities upstream. It starts in our own backyards.

Then people shift from being angry to wanting to change things back home, or to wondering what we can do to change our communities to make things better here on the river.” The heart and soul of Missouri River Relief is the crew.

“It would be impossible to pull all of this off without them,” Steve says. “These are volunteers that put in extra hours and weekends, traveling throughout the river valley to help put on events in a variety of communities.

“A lot of these folks are attracted to the hands-on work of river cleanup. They are passionate about introducing people to the Missouri River and enjoy the challenges. I think the positive sense of community, even family, is what keeps our crew coming back year after year.” In addition to hosting events statewide, River Relief also takes part in cleanups in Iowa, Nebraska, and as far away as South Dakota. To volunteer for an event near you this summer or fall, visit riverrelief.org.

The Missouri River: Up Close and Personal

Most people only get to know the Missouri River by driving over it on a bridge. Taking part in a cleanup changes that perspective forever.

“It’s a transformative experience for most folks to get on a boat on the river. That’s how you really get a sense of the scale of it. That this is really big nature we are talking about here,” Steve says. “Even just a mile or two from any town on the river, you can feel like you are in a wilderness. I love seeing that change take place over a morning. People can be very apprehensive about getting on a boat in the morning, but they come back two hours later with confidence and huge smiles. It recharges me every time I see that.

“I have seen volunteers come to cleanups and walk away inspired to change things in their own community. We can’t pick up every piece of trash, but our work does cause ripples of change that spread up and downstream.”

The Take-Away From Trash

“To a fourth grader, trash is tangible,” Steve says. “Watershed conservation might not be. Trash is something a classroom of students can pick up in an afternoon and immediately make a difference. That day might be a kid’s most memorable day at school for the entire year.” While students are ankle deep in river gumbo, wrestling old tires and liberating Styrofoam, they are picking up something more lasting than just a discarded tire.

They’re choosing a future that includes a cleaner river. The moment may soon be forgotten, but for some, it may be the moment they become lifelong conservationists.

Bringing a Clean River Message to the Classroom and Beyond

Also in the works is an annual “River Rendezvous” gathering of the Missouri River Action Teams (MoRATs), including race directors, cleanup coordinators, wildlife habitat managers, scientists, and others interested and involved with river issues.

“Our partnership with the EPA also allows River Relief to offer mini-grants to organizations for stewardship, education, and outreach activities. This supports conservation and education all along the Missouri River here and in Nebraska, Iowa, and Kansas,” Kristen says.

The Battle for Trash Continues

And so these warriors continue the fight to rid the Missouri River of trash and to promote the message of a cleaner river for future generations. Die-hard River Relief volunteers continue to answer the call. They are joined by more and more schoolchildren each year.

“River Relief, Stream Team 1875, is one of the largest teams in our Stream Team program. They have contributed some of the greatest tonnages of trash collected in the history of the program,” says Amy Meier, a Stream Team coordination biologist for the Missouri Department of Conservation. “I am constantly impressed with their wide-ranging approaches and fresh ideas to bring more people to the banks of the Big Muddy. They incorporate art, music, history, and culture into their efforts, which is why they’re so successful. Whether they are in big cities, small river towns, or anywhere in between, they always seem perfectly at home.”

For the River Relief crew, being at home is being on the river. On any given weekend, they are likely up before dawn, in a fog-filled river bottom, doing a final check on the plate boat before the day’s volunteers show up, eager to chip in. They are probably sporting muddy waders and are fueled up on coffee. They know the day’s battle plan well. They know that in addition to trash, those volunteers may pick up something bigger — perhaps a new appreciation for a river that has finally found its voice, a river flowing right past their back door.

Making a Difference, One River at a Time 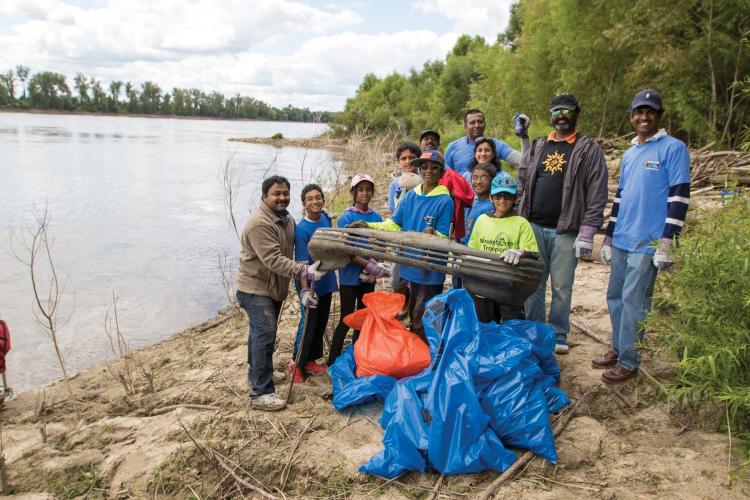 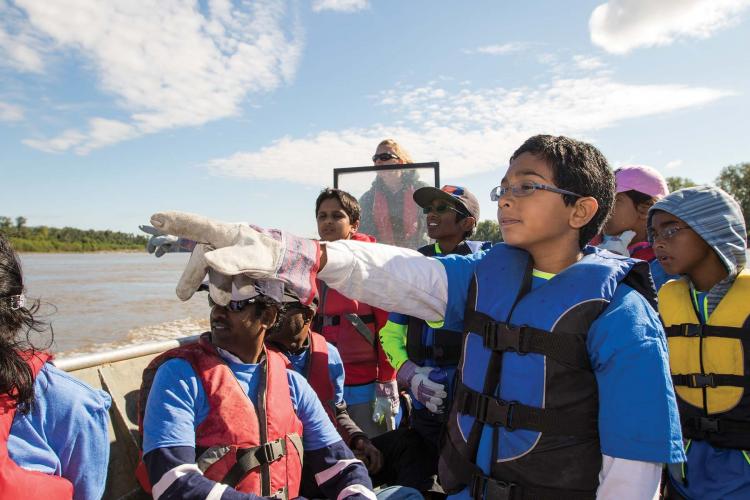 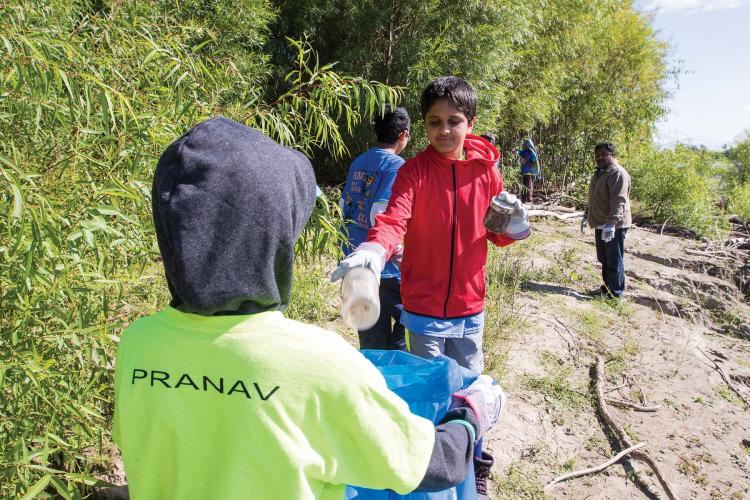 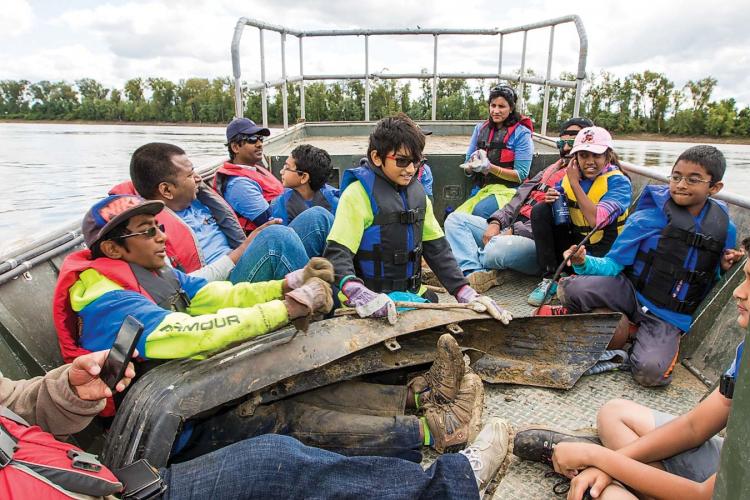 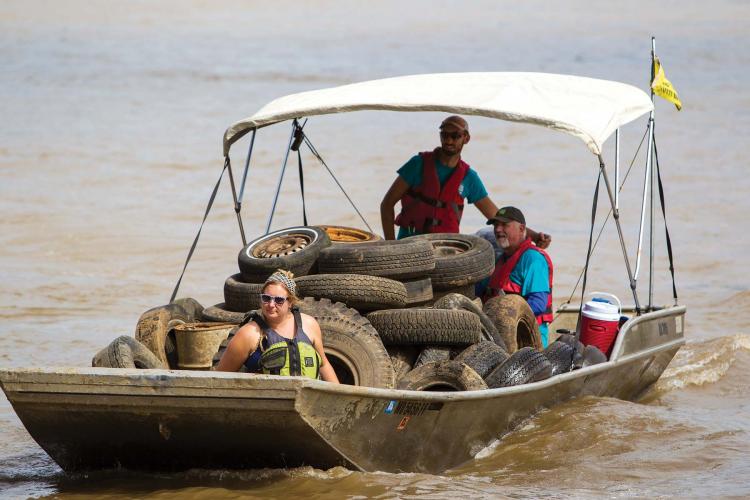 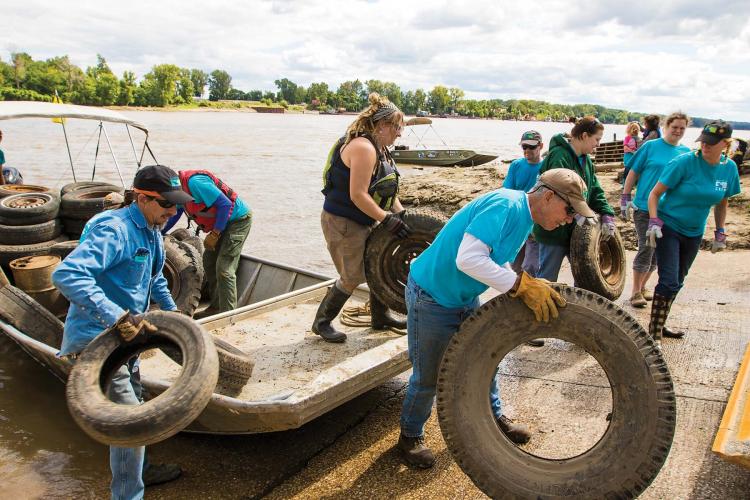 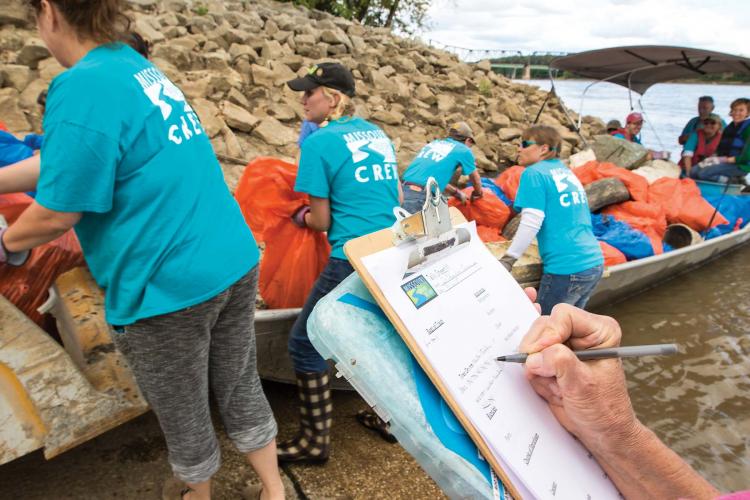 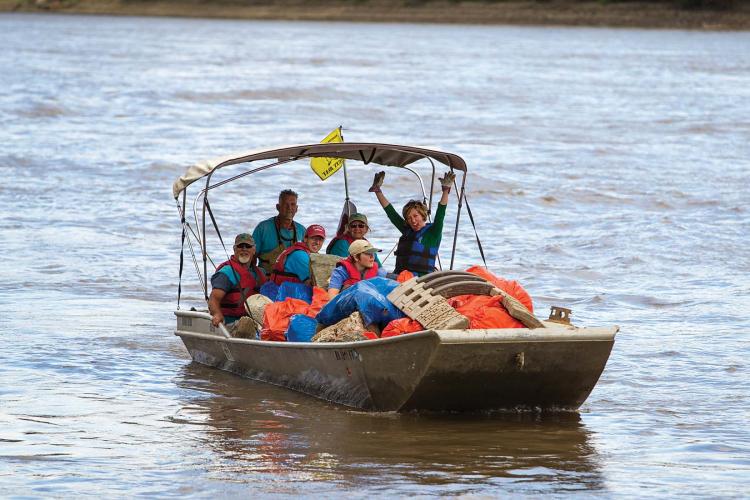 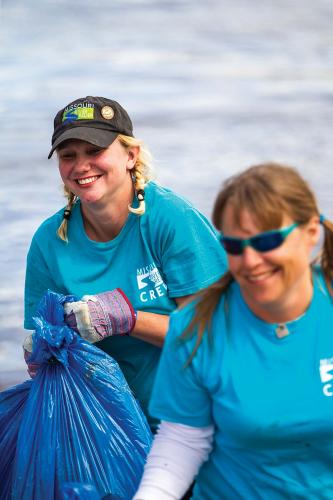 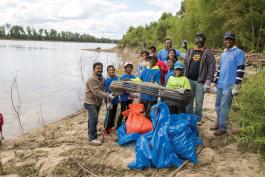 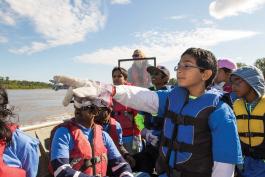 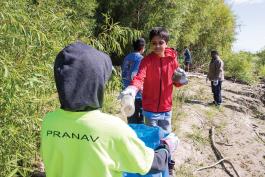 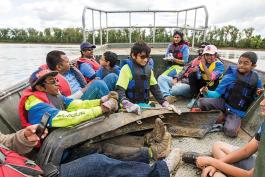 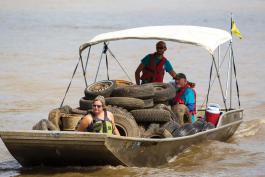 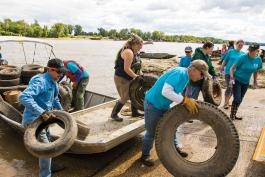 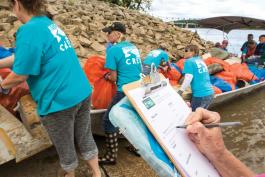 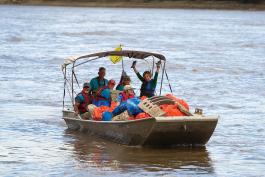 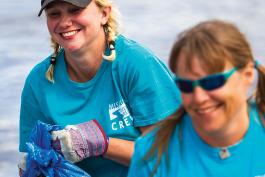 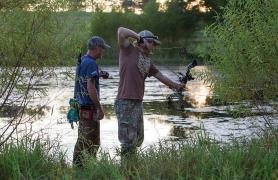 Bowfroggin’
THIS CONTENT IS ARCHIVED
Body
Take your archery skills to the water this summer for a hopping good time.
Media 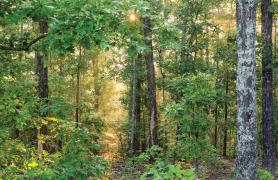 Nature’s True Value
THIS CONTENT IS ARCHIVED
Body
What would it cost to replace the free stuff nature gives us every day?