Hunting with a Muzzleloading Shotgun 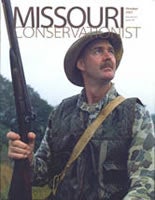 To many hunters, muzzleloading means heavy-caliber rifles and more opportunities to tag deer. Deer hunting isn't the only thing you can do with a muzzleloader, however. A muzzleloading shotgun can give your autumn outings for any game a delicious twist.

Flip through a catalog that offers hunting equipment, and the section featuring muzzleloading firearms will likely include several shotguns. Some will sport in-line ignition systems and choke tubes. Others will be traditional double-barrels with side hammers and cylinder bores.

If you are interested in the challenge associated with the slower loading time of a muzzleloading scattergun, but still desire the range of a modern shotgun, in-line models with choke tubes are the way to go.

If, on the other hand, you are interested in pursuing game the way our pioneering forefathers did, then a sidehammer, muzzleloading shotgun with a straight cylinder bore is made to order.

Both styles, properly loaded, are effective and reliable hunting tools.

My first experience hunting with muzzleloading shotguns was 15 years ago, a dove hunt. A silage cut I had permission to hunt was drawing doves in such numbers that, even on days when I shot poorly, I often had my limit in an hour or so. I mentioned this to my good friend, Larry Neal.

"If you want to slow down your hunts, we could try for doves with my muzzleloading shotguns," Larry suggested.

As Larry had guaranteed, both of his muzzleloading shotguns produced good patterns out to 25 yards.

The following weekend, Larry and I took our shotguns, powder horns and possibles bags out to the silage field and positioned ourselves 50 yards apart along a fencerow where doves were crossing in droves. I shot and missed, drawing a verbal ribbing from my hunting buddy.

"Almost anyone could kill a limit of doves in this field!" Larry yelled.

While I quickly poured powder and shot, and stuffed felt wads and overcards down the barrels, doves continued to wing past within easy range. Finally, I connected. Encouraged by cheers from Larry, I retrieved my bird.

By the end of the hunt, our hands were smudged black with burnt powder, and our game bags bulged with doves. The muzzleloading shotguns had proven effective. By holding shots to within 25 yards, we cleanly dropped doves, and we didn't suffer a single misfire. A muzzleloading shotgun, I decided, was something I needed.

I was interested in purchasing a double-barrel shotgun of typical, mid-19th century design, which meant 10-gauge and cylinder bore. Before smokeless powder was developed in the late 1880s, the "10" was the most popular gauge, and before the mid 1870s, all shotguns were cylinder bore. Choke boring-constricting the width of the muzzle opening-was successfully designed about 1875.

After thumbing through a number of catalogs, I finally ordered an Italian-made, 10-gauge double-barrel. I was pleased when it arrived. The finish and wood-to-metal fit were good. The shotgun fit well in my hands and was well balanced. At the shooting range, it delivered dense patterns out to 25 yards. In fact, with size 7 1/2 shot and the maximum recommended by the manufacturer-110 grains of 2F blackpowder and 1.5 ounces of shot-the muzzleloader threw out patterns at 25 yards that would roll a turkey.

Larry Neal had killed several turkeys with his muzzleloading shotguns.

"The secret to killing a turkey with a cylinder-bore, muzzleloading shotgun is being patient and picking your shot," Larry said. "You've got to let a gobbler work in close."

The following spring, with a two-bird limit and a three-week season, I decided to try to take my first bird with a modern shotgun, and then try to get the second bird with my muzzleloader.

Attempting to bag a turkey can often be both humbling and brutal, what with all the sleep deprivation, bad weather and bad luck, but that wasn't the case during my inaugural muzzleloader season for turkeys. The weather held clear and warm. The woods echoed with gobbles, and I enjoyed good luck. On Wednesday of the first week, a gobbler eagerly answered my calls. After a little enticement, the tom stepped into view 35 yards away. I aimed carefully and squeezed the trigger. Bird One wore a tag.

Sunday evening before the second week of the season, I organized my muzzleloading gear and made final preparations for an attempt to take the second bird with my front-stuffing scattergun. A week earlier, after my last patterning session, I completed the most important step toward guaranteeing that the gun would belch flame when I pulled the trigger; I meticulously cleaned the shotgun and left the barrels and nipples dry and free of oil.

Contrary to the advice of many gun writers, I did not fire a couple of percussion caps over the nipples before loading to ensure that the nipples were free of oil or obstructions. Hunting with muzzleloading rifles had taught me that shooting a percussion cap leaves a greasy, black residue in the breech, and sometimes a piece of exploded cap can lodge in a nipple and clog it. Thorough cleaning is the key to a reliable muzzleloader ignition system.

For quick reloading, I place overcards, felt wads and pre-measured shot and powder charges in separate plastic film canisters. I labeled these and sealed them in plastic sandwich bags along with spare percussion caps. With these steps complete, I was ready to hunt.

For five days, early in the morning before work, I hunted the same mature gobbler. Each morning he appeared with four to eight hens, and each morning he ignored my calls. On the fifth day, I set out two hen decoys. I called in the gobbler's hens. The tom followed, and in a cloud of white smoke, the tom fell to my muzzleloader.

After I've bagged a gobbler, when I peel the backing off my tag, my hands always shake with excitement. On this morning, my hands shook a little more than usual.

Safety While Hunting with a Muzzleloading Shotgun

A Closer Look at In-Line and Traditional Muzzleloading Shotguns

All in-line, muzzleloading shotguns, (at least, the ones I have seen advertised), have single barrels. One shot is all you get before having to reload. Almost all, however, have screw-in chokes. A 12-gauge, blackpowder shotgun with a screw-in, "full" choke will throw patterns well capable of killing a turkey out to 35 yards. When loading, however, pushing the wad past the choke is tough business. A short-starter with a tip that fits the diameter of the barrel will help get the job done. Or, you can remove the choke when loading the gun, and then screw it back in.

Most muzzleloading, double-barrel shotguns of traditional design are cylinder bore, which limits their range. However, the guns offer two shots instead of one, making a double on flying game possible. In hand, they feel like what they are-firearms built for wingshooting.