Imagine a landscape marked by limestone and dolomite ridges, dry hollows, caves, sinkholes, big springs, natural bridges and streams that sink into their own beds. That's Missouri karst! The word "karst" comes from the German for the limestone region of Krs, Slovenia. Missouri is known as The Cave State because of its large number of caves. At least 5,700 caves are recorded in the Missouri Speleological Survey's files in Rolla. Tennessee exceeds our count with 7,000 caves, but people discover about 125 new caves each year in Missouri. Certainly our caves are among the largest and most spectacular in the nation. There are caves in 78 of our 114 counties, mostly in the Ozarks, but some as far north as Hannibal.

Many of our ancient caves have passed through several lifetimes of development, starting with the dissolving action of slightly acidic groundwater on fractured bedrock. This natural plumbing enlarged because of collapse, canyon cutting by internal streams, accumulation of clays and gravels and re-excavation by streams. Drippings of flowing water laden with dissolved rock deposited calcite in these openings. The eventual fate of a cave is to erode away, as illustrated by natural bridges.

These events ranged over huge spans of time. The sea deposited Missouri's oldest cavernous rocks around 500 million years ago during the Cambrian Period.

The Gasconade Dolomite of the Ordovician Period (around 450 million years old) is the most cavernous rock formation in Missouri.

In the Mississippian Period (about 350 million years ago), marine organisms created the Burlington/Keokuk Limestones which today are highly cavernous around Springfield, Columbia and northeastern Missouri. By the time the Cenozoic Era began 66 million years ago, Missouri had dolomite and limestone up to 1500 feet thick. At present, karst is developing rapidly, as evidenced by our large, deep springs and numerous losing streams.

The Perryville karst in Perry County has about 650 known caves, the most of any county in Missouri. The caves are large, complex, flood-prone systems, and groundwater contamination is a growing problem in this area. Crevice Cave is the longest in the state at 28.2 miles. Berome-Moore Cave is an extensive system in which ancient cat tracks have been found.

The Springfield Plateau contains hundreds of relatively younger caves. Expanding urban areas threaten groundwater and the endangered Ozark cavefish. Some caves have beautiful speleothems, despite all the mud, and cave structures tend to be fairly simple.

The largest continuous karst terrain is in south-central Missouri. The Salem Plateau is considered a cave factory, with the oldest and most spectacular caves in the Gasconade and Eminence dolomites. Some caves may have paleocave components dating back many millions of years. The caves are wet and muddy with lots of "unctuous red clay," that is a sticky, slimy clay with no grit. This stuff completely stains cavers coveralls and gear.

The Mark Twain karst around Hannibal is formed in Louisiana limestone and Burlington limestone. Mark Twain Cave is an astonishing maze with few speleothems, and is open to the public.

The St. Louis karst is all but obliterated by urban development. German brewers used the caves for aging and storing beer in the 19th Century. Cherokee Cave, used by the Lemp brewery, was partially destroyed by highway building, but still contains fossils of the extinct flat-headed peccary, which were studied by the famous paleontologist, George Gaylord Simpson. When one considers what happened to the numerous caves under St. Louis, one wonders if this will be the fate of caves near Springfield, Branson, Lake of the Ozarks and other developed areas.

Most people know that speleothems, such as stalactites and stalagmites, take hundreds or thousands of years to grow. These cave resources are protected by state or federal law. But caves contain many fragile resources, such as bats, groundwater and many other phenomena that can benefit us educationally, scientifically and recreationally.

Since 1979 the Conservation Department has built its program of cave conservation, research, and education. We manage over 180 caves on state lands, and we extend a helping hand to private and federal landowners in studying and protecting their cave resources.

The Conservation Department has purposely acquired some caves that needed protection for endangered species, such a gray bats and Indiana bats. A few caves are protected for posterity, just because they are pristine examples of Missouri karst. Many of our caves are available for exploration, mapping and educational recreation, as are some caves on other public lands.

Even if one does not care much for caves, the groundwater issuing from our caves and springs is an important resource to Missourians. Our huge springs in the Ozarks feed important trout fisheries and provide rich habitat for wildlife. 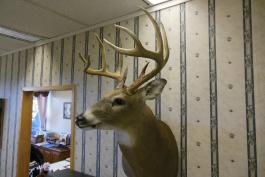