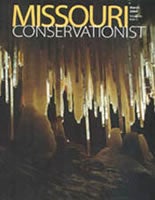 The Year to Receive

We hear a load of promises in an election year. Often, candidates promise us trophy species, but by the next year we find that they have changed the definition of trophy to bullhead or carp. I have nothing against bullheads and had one hanging in my office for years to remind me to persist, but it would be nice to get what we were originally promised. This year we're hoping for a real trophy--The Conservation and Reinvestment Act, or CARA--that would move us far forward in our constant struggle to protect Missouri's lesser known resources.

Almost every state's resource programs are funded primarily by license or permit fees. Because of this manner of funding, only a few states in the nation are able to direct money to benefit nonhunted wildlife species. If they could, our nation would take a major step toward preventing extinctions and increasing wildlife diversity. Look, for example, at how permit monies have made possible outstanding management successes with deer, turkeys, trout and other species.

Some years ago, a few visionaries devised a way to provide funds to states to aid in their management of nongame species. The Conservation and Reinvestment Act would direct money derived from the nation's offshore oil and gas leases to a landmark conservation effort that would benefit urban parks and recreational trails, historical preservation programs, wildlife, fish, forests, outdoor recreational programs, state parks and trails and endangered and threatened species.

Because they are more vulnerable to spills and other problems related to offshore oil and gas extraction, coastal states would receive a larger portion of the funds than inland states. We estimate that Missouri would receive about $32 million per year for our collective programs. Of this amount, the Conservation Department would receive about $7.5 million.

We have committed to inject at least half of this amount into local matching projects, such as protecting wildlife habitat in your neighborhood or city or county. Some of it may go to local schools to develop outdoor classrooms. We would provide the funds and the school and students would provide the labor and planning. The result would be a project that educates everyone and keeps the local frog population from becoming endangered. Repeat this a zillion times or so and we have a better world for our kids and ourselves, and the habitat we share in common.

That's the promise. Here's an update on how close we are to catching this trophy. Congress has passed the CARA legislation (HR Nr. 701/S. Nr. 25) bill out of committee and it's ready for a floor vote by the full House of Representatives in March. We need the votes to pass it there and send it to the Senate for consideration. It looks real promising, as over one-half of the House members have signed on as cosponsors. All 50 governors have endorsed the bill. It received bipartisan support in committee. Without your help, though, it could still end up a bullhead instead of a bass! Or in the toilet, adding to interstate water quality problems!

One way you can help is to show in a tangible way your support for this legislation to your elected officials. People around the country are encouraging their legislators to vote for and support the CARA legislation by sending them Beanie Babies or other stuffed wildlife toys covered with Band-Aids and labeled to the effect that wildlife needs more than a Band-Aid approach.

This campaign has the added advantage of getting rid of those old stuffed toys that the kids and you accumulated over the years in a positive way. I think it's a pretty good gimmick. Its just oddball enough to work and provide CARA with needed national exposure and attention.

Timing is everything so don't delay sending your stuffed wildlife toy. You can either pitch in and try to change the future or learn to be content with a less varied Missouri landscape. For more details or addresses, contact a nearby Conservation Department office or the Conservation Federation. Let's make this the year we receive a down payment on the promise for a better conservation tomorrow.