MDC biologists have been studying these prehistoric fish since at least the 1960s. We need current information to implement the best possible management strategies to maintain this popular fishery. MDC has completed a 5-year paddlefish tagging project to learn more about this species and improve paddlefish management.

We Need Your Help

When you catch a tagged paddlefish write down the following information:

Call the number on the tag to report fish caught with jaw tags or contact Dave Ostendorf at 573-290-5858 or david.ostendorf@mdc.mo.gov.

While supplies last, MDC will send an “I Caught a Missouri Paddlefish” t-shirt or hat to those submitting a tag. Snaggers can keep the silver jaw tags.

Thank you to all the snaggers and commercial fishers that returned tags during our 5-year paddlefish tagging project and continue to report tags.

Title
Lake of the Ozarks
Body

MDC has completed a 5-year tagging project to learn more about paddlefish populations and improve paddlefish management. During the project, MDC staff placed metal jaw tags on thousands of paddlefish in Lake of the Ozarks, Harry S. Truman Reservoir, Table Rock Lake, and the Mississippi River and its tributaries. Tag reporting by fishers enables us to estimate exploitation which is the proportion of fish in a population that are being harvested.

(estimate of fish removed by fishing)

Young paddlefish are consistently caught in the Mississippi River by MDC researchers every year, indicating natural reproduction is occurring.

In Harry S. Truman Reservoir, we implanted 100 transmitters in reproductively mature paddlefish and tracked their movements. Spring aggregations were located in the riverine portion on the upper Osage Arm, above Taberville Access. A few embryos and larvae were collected indicating that some natural reproduction is occurring. However, it is unclear how successful young paddlefish are at surviving.

Of the fish tagged with transmitters:

During the five-year study (2015–2019) 2,311 fish were collected from the Mississippi River ranging in size from 6 to 46 inches in length (eye to fork). Paddlefish that ranged in length from 24–41 inches were checked to determine sex and if they had reached sexual maturity. At 32 inches, 41 percent of all females that were checked, were mature (had black eggs, or had spawned at least once and were developing eggs). Protecting the spawning stock is needed to support a self-sustaining paddlefish population on our large rivers.

Until recently, the St. Francis River paddlefish population was not intensively studied. Since the initiation of sampling (2016–2021), 198 paddlefish have been captured and tagged, ranging in size from 25–48 inches. Size structure is good with fish up to 80 pounds being captured while sampling. High discharges from Wappapello Lake, which commonly occur in the spring can limit snagging success. During high water the fish tend to move out of areas where anglers commonly snag and access is also limited on the lower St. Francis River. The combination of these two factors likely keep exploitation low on this population.

River Paddlefish size structure and the percent of fish protected by the current 24” Minimum Length Limit (MLL) and the proposed 32” MLL for each of the river fisheries sampled.

While our exploitation estimates are not unreasonably high, with increased popularity of snagging and successful migration out of all three reservoirs, stocking rates may need to be re-evaluated. Currently, fish are in good condition with over 20% of the fish harvested by anglers in each reservoir exceeding 50 pounds (40 inches). 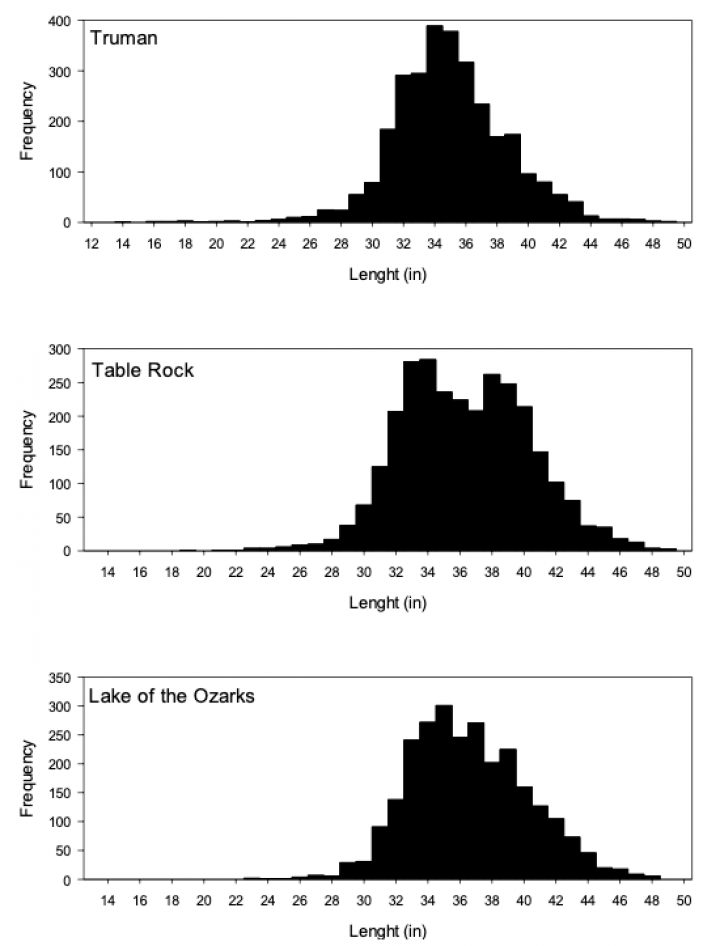 Size structure of paddlefish sampled in each of the reservoirs.

Paddlefish were tagged below Wappapello Dam 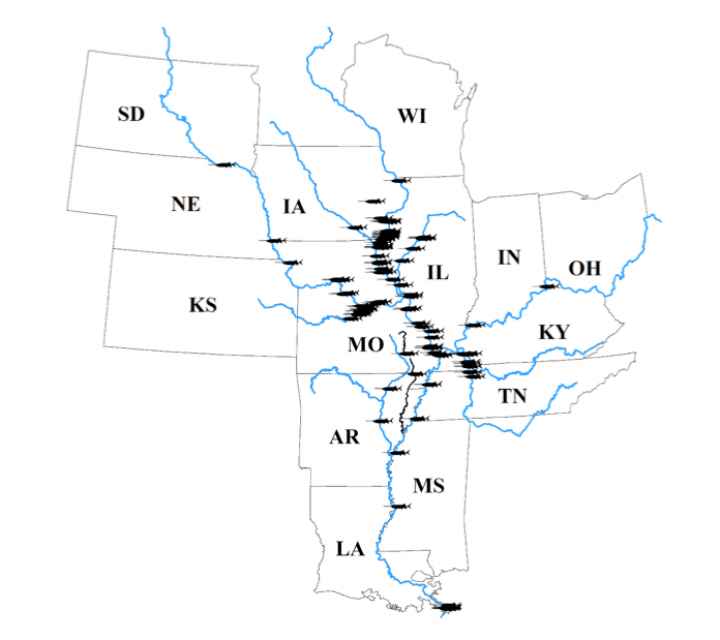 Locations of paddlefish tagged on the Mississippi River, St. Francis River, or the Black River. Fish were either caught by fishermen (recreational or commercial) or detected by telemetry receivers.

Lake of the Ozark

Not only have jaw banded fish and telemetry fish been detected outside of the reservoirs in surrounding rivers (i.e., Osage, Missouri, Mississippi, Illinois, and Kaskaskia, but snaggers also come from all over the United States to snag in Missouri.