Similar species: Pimplebacks are similar but have randomly distributed small knobs and may have a green ray from umbo to halfway down shell. Monkeyface has a distinct groove. 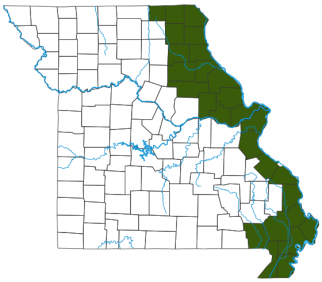 Most often found in rivers of the Lowland Region, northeast Missouri and Mississippi River; may be locally abundant.

Most common in large streams or rivers in firm sand and mud.

Algae and fine particles of decaying organic matter; extracts nutrients and oxygen from water drawn into body cavity through a specialized gill called the incurrent siphon; sediment and undigested waste are expelled through the excurrent siphon.

Vulnerable. Found only in a very few regions, but locally abundant in those areas. A Species of Conservation Concern. Relatively recently was found in the South Grand River (an Osage tributary, now inundated by the Truman Reservoir) and in the Salt River (much of which is now Mark Twain Lake), but damming destroyed their habitat in these waterways.

Males release sperm directly into water. Females downstream siphon sperm into the gill chamber, where eggs are fertilized. Eggs mature into larvae (called glochidia), which discharge into the water and attach to host fish—in this species, white crappie, channel and flathead catfish, bluegill and more. The tiny mussel eventually breaks away and floats to the bottom of the stream, and the cycle repeats.

Mussels are excellent biological indicators of water quality because they are long-lived and relatively immobile, accumulating contaminants in water that can be scientifically analyzed. This species has been used in the cultured pearl and button-making industries.

Mussels act as nature's “vacuum cleaners,” filtering and cleansing polluted waters. They are also an important food source for other species in the aquatic environment.

Title
Media Gallery
Title
Similar Species
About Aquatic Invertebrates in Missouri
Missouri's streams, lakes, and other aquatic habitats hold thousands of kinds of invertebrates — worms, freshwater mussels, snails, crayfish, insects, and other animals without backbones. These creatures are vital links in the aquatic food chain, and their presence and numbers tell us a lot about water quality.