Peacock flies, in the family Tephritidae, are named for the banded, spotted, intricately patterned, and often brightly colored wings of many species. The front half of the bodies usually have noticeable, upright bristles.

Specialists confirm their identifications in this group of small to medium-sized flies by studying details of the wing venation.

Behavior helps to identify these flies: at rest, they often move their wings slowly up and down. The courtship dances and other behaviors of several species are interesting and easy to watch. Females may be identified by a pointed extension on their abdomen (see Life Cycle below).

Some examples from this family of flies include:

Similar species: There are two families of true flies that are called “fruit flies,” and this is one of them. The other family of fruit flies are the Drosophilidae; that group includes the famous Drosophila fruit flies used in genetics experiments. Members of the drosophilid fruit fly family usually have clear wings, lacking the ornate patterns of tephritids. Confusing matters more, tephritid fruit flies are sometimes called “picture-winged flies,” but that name is more commonly used for unrelated flies in the Ulidiidae family, which may also have banded or spotted wings.

Size
Length: less than ½ inch.
Where To Find
Statewide. Different species have different distributions, depending on their food plants.

Most species will be found where their food plants are numerous. Members of genus Paracantha, for example, are almost always found on thistles (Cirsium spp.), so those species are often seen in the open, grassy habitats where thistles abound: pastures, old fields, roadsides, and so on. The apple maggot fly (Rhagoletis pomonella) is usually seen around apple orchards but may be found on and near hawthorns, cherry trees, and other trees in the rose family.

Larvae eat fleshy parts of fruits and vegetables. In some tephritids, the females deposit eggs into the flowerheads of composite flowers (such as thistles and sunflowers), and the pudgy larvae live and eat the developing seeds. In some species, such as the apple maggot, the larvae develop within fruits, tunneling as they go, so they can be economically important pests. In other tephritids, the larvae live within the tissues of leaves, eating their way through the spongy cells as leaf miners. Others live and develop in stems, roots, or leaves and form galls — enlargements of the plant that occur in response to the insect’s presence.

Males and females usually court on their foodplants. Female tephritid fruit flies have a pointed, conical oviscape, which is a hard protective sheath covering the needle-like ovipositor, which they use to insert eggs into the living tissues of plants (often in unopened flowerheads). See “foods” above for the varying larval feeding ecology of various groups of tephritids. As adults, tephritids usually live for less than a week.

Male-female courtship, and male-male territorial competition in genus Paracantha is fun to watch. The adults walk around smoothly on the spiny stems of thistles (their food plant, into which the female will insert eggs). The flies’ mouthparts pump continuously in and out, and they repeatedly extrude a drop of clear, sugary liquid, which grows larger and larger before then draw it back in again. (With a little imagination, you might think they are chewing gum and blowing bubbles.)

Various wing movements (flicking, waving, extending, and fanning) are used for mate attraction and to ward off rivals. Two competing males may vibrate their wings, then lunge at each other and butt heads like tiny rams.

Prior to mating, the male (working his mouthparts) presents to the female a droplet of sugary liquid, which the female accepts. As she eats the gift, the male mates with her.

Some species of tephritid fruit flies are pests, including species that are destructive to olive, celery, parsnip, sunflower, and blueberry crops. The infamous Mediterranean fruit fly (or Medfly, Ceratitis capitata), native to Africa but introduced to other continents, is in this group.

On the other hand, some tephritids have been used as biological control agents for combating noxious weeds. The tephritids deposit eggs in the flowerheads of the weeds and their larvae eat the seeds before they can mature. One example is the Canada thistle stem gall fly (Urophora cardui), with groovy black wavy patterns on its wings. It was imported from Europe to help combat invasive Canada thistle (which, despite the common name, is also from Europe).

The economic importance of tephritids as pests or biological control agents has led to them being a well-studied group worldwide.

Most species in this group are not pests to human interests. Their beauty and curious behaviors make them fun to watch on hot summer days. The mating rituals and territorial displays of many species are truly interesting.

This is what bird food looks like! Tephritids are just some of the many kinds of insects that eat plants and thus convert plant nutrients into their own bodies. Birds and other predators eat the insects. Even bird species famous for eating seeds require insects during breeding season, because they need additional protein as they raise young. 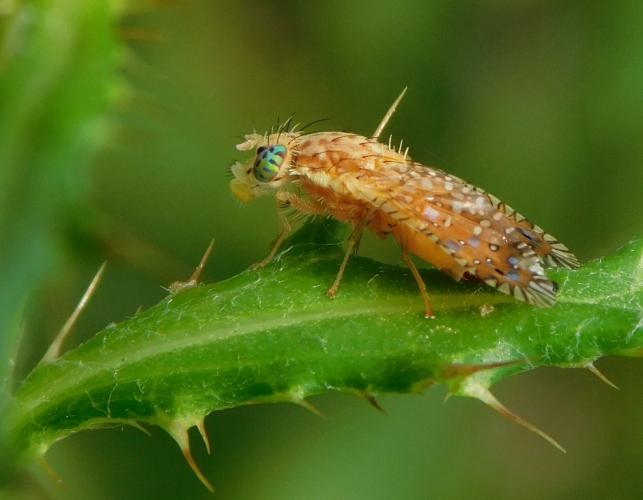 Caption
Tephretid fruit flies, in the family Tephritidae, are often called peacock flies for the intricately patterned, often brightly colored wings of many species.
Right to Use
1/5
Image 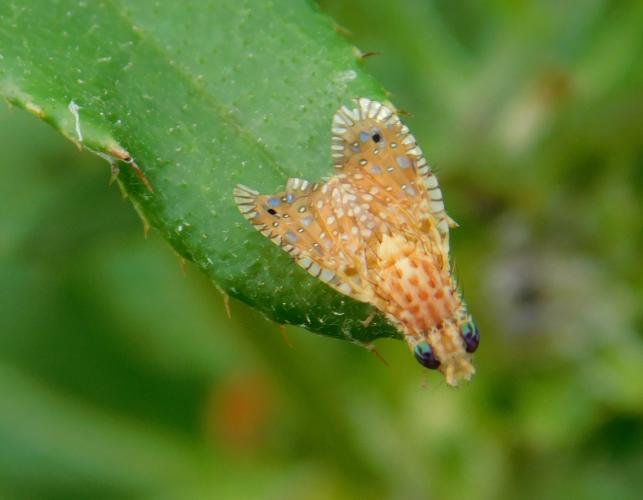 Caption
Paracantha culta is an ornately colored, brilliantly patterned tephretid fly. It uses thistles as larval food plants. Here, a male patrols for females and guards against rival males.
Right to Use
2/5
Image 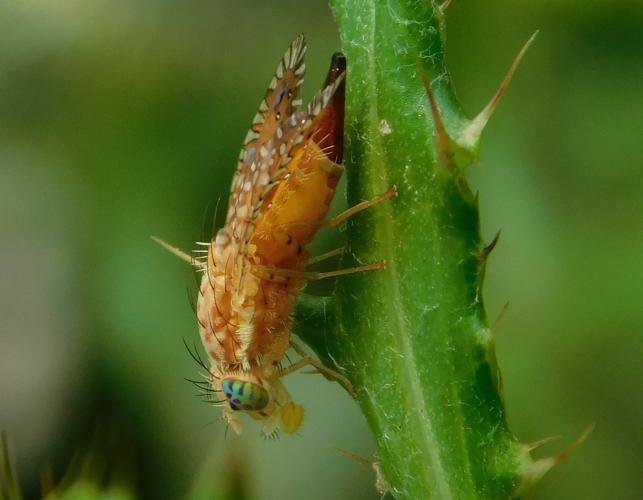 Caption
Paracantha culta is only one of about 300 species of tephretid fruit flies in North America north of Mexico. This individual is a female; note the pointy appendage at the tip of the abdomen. She is perched on a thistle stem.
Right to Use
3/5
Image 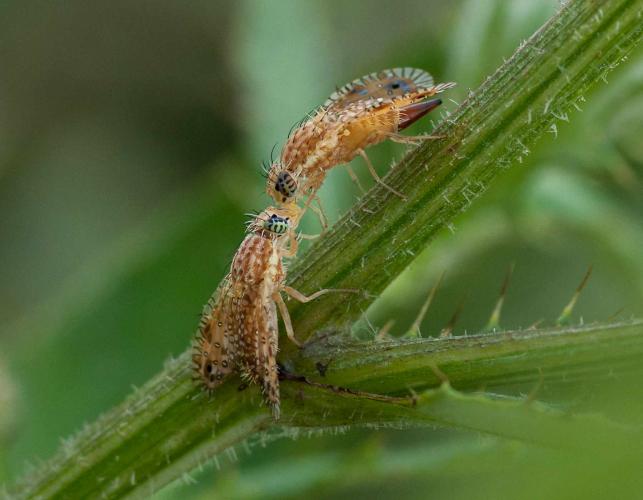 Caption
Many tephretid flies have fascinating courtship behaviors. Here, a male Paracantha culta (below) transfers a sugary droplet to a potential mate (female, above).
Right to Use
4/5
Image 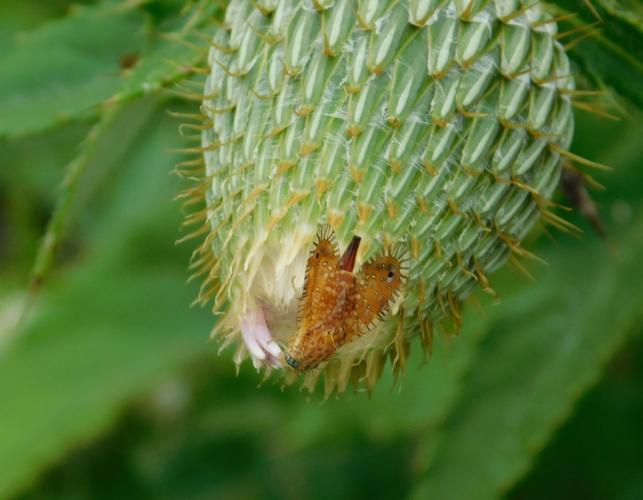 Caption
This Paracantha culta female is using a specialized appendage on her abdomen tip to insert eggs into the unopened flowerhead of a thistle.
Right to Use
5/5
Image 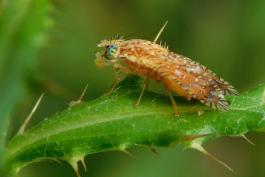 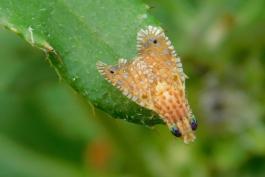 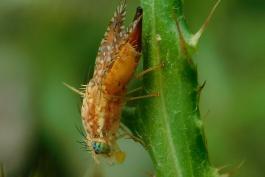 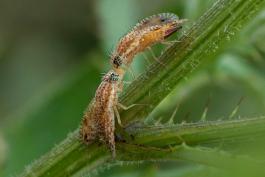 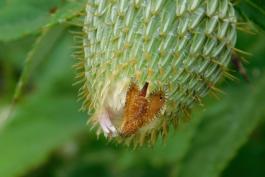 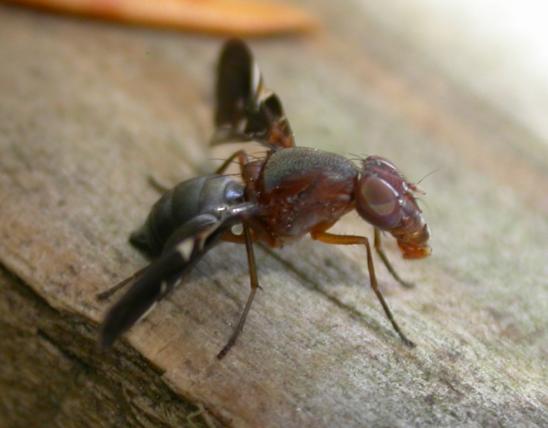 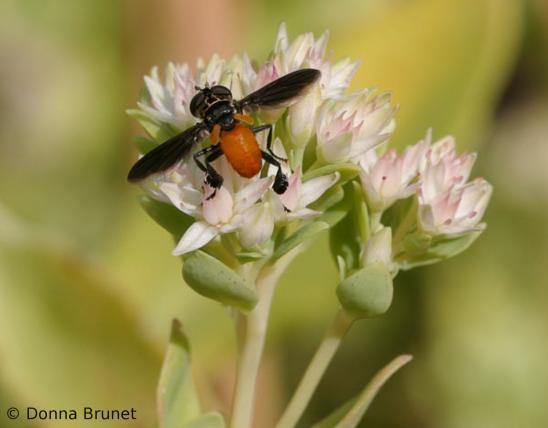 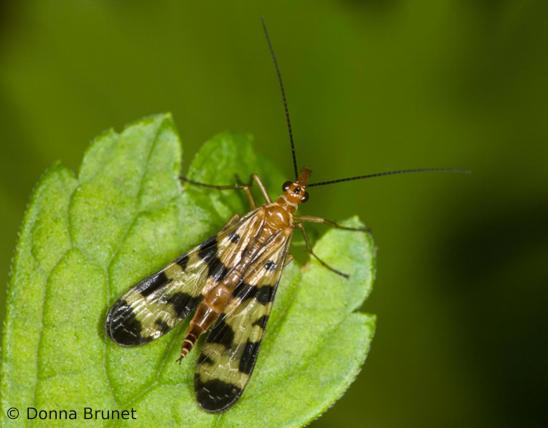 Common Scorpionflies
About Land Invertebrates in Missouri
Invertebrates are animals without backbones, including earthworms, slugs, snails, and arthropods. Arthropods—invertebrates with “jointed legs” — are a group of invertebrates that includes crayfish, shrimp, millipedes, centipedes, mites, spiders, and insects. There may be as many as 10 million species of insects alive on earth today, and they probably constitute more than 90 percent all animal species.