The northern cottonmouth is a heavy-bodied, dark-colored, semiaquatic snake that is dark olive brown to nearly black. In adults, dark crossbands are normally indistinct. The head is noticeably wider than the neck. The top of the head is dark brown or black. A black stripe may be present from the snout through the eye and onto the neck. Most individuals have a white upper lip. Northern cottonmouths in the Missouri Ozarks can be nearly black; coloration within a population can be quite variable. There is a large sensory pit (heat-sensing pit) located between the nostril and eye on either side of the head. The eyes have a vertical pupil, but the dark coloration of the eyes may make the pupils difficult to see. The belly is cream colored and heavily mottled with dark brown or black blotches and smudges. The scales along the back and sides are heavily keeled, and the anal plate is single. Young northern cottonmouths are lighter in color and the 10–15 broad crossbands are distinct. Newborn cottonmouths have a greenish-yellow tail tip.

The name “cottonmouth” is from the whitish lining of the mouth. When alarmed, a cottonmouth typically opens its mouth widely in a defensive posture, showing the cotton-white lining.

The bite of the northern cottonmouth is dangerous and can be fatal if medical treatment is not sought immediately.

Similar species: There are several species of nonvenomous semiaquatic snakes found in Missouri. These harmless watersnakes and others vastly outnumber the much-feared cottonmouths. All are protected by law.

The northern cottonmouth has a limited range in Missouri; it is likely that most semiaquatic snakes seen or killed are in fact nonvenomous watersnakes. Also, a misconception is that cottonmouths are commonly found in trees along the edge of the water and drop onto people or into boats. Most likely individuals are seeing nonvenomous watersnakes that do use shrubs and small trees along the water’s edge. The cottonmouth prefers to be on the ground along the water’s edge and rarely if ever climbs trees. 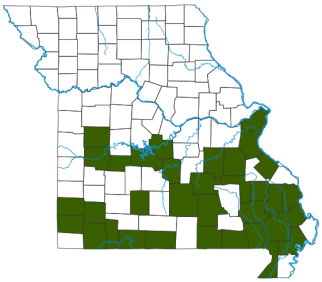 Mainly occurs only in the southeastern corner; has scattered populations in the Ozarks. None occur north of the Missouri River in our state.

In Missouri, the northern cottonmouth occurs in two distinct habitats. In southeastern Missouri, this species occurs in the cypress swamps, sloughs, oxbow lakes, and drainage ditches of the Mississippi lowlands. In the Ozarks, this species occurs in scattered populations in cool, spring-fed, rocky creeks and small rivers. In the latter habitat, cottonmouths are highly nocturnal and secretive.

This species often overwinters in rock crevices along limestone bluffs. In some areas, cottonmouths migrate from lowland wetland habitats to upland, forested bluffs in autumn, and return to wetlands in spring. These denning sites are often shared with racers, western ratsnakes, copperheads, and timber rattlesnakes.

Cottonmouths in the lowlands of southeastern Missouri, which lack rocky outcrops, presumably use hollow logs and stumps, root channels of old trees, and animal burrows to overwinter.

If encountered near brush or other cover, the northern cottonmouth will usually try to escape. If found in an open area, this snake remains in a loose coil and stands its ground. Cottonmouths often gape their mouth in a defensive posture, showing the white lining that is the origin of the common name. A cottonmouth is known to vibrate its tail and will not hesitate to strike if touched. Also, a strong smelling musk is released from glands at the base of the tail any time an individual becomes defensive. When swimming through the water, a cottonmouth will hold its head above the surface with its back out of the water.

The cottonmouth is a dangerously venomous species that can deliver a fatal bite. Various harmless snakes, especially watersnakes, are often misidentified as cottonmouths and needlessly killed. Learn to identify them and refrain from destroying snakes. All Missouri snakes are protected by law.

Cottonmouths eat a variety of animals — fish, frogs, other snakes, lizards, small turtles, rodents, and small birds, as well as small dead animals killed on roads. Fish and frogs are most often eaten. Although most prey are captured within and around wetlands, cottonmouths will forage in upland, dry sites away from water on occasion.

The cottonmouth has a limited range in Missouri. Missouri is the northwestern limit of this species. Low winter temperatures limit its distribution.

Active from late April through October. For typical denning and overwintering sites, see habitat comments above.

Individuals bask in the sun during the spring and autumn, but for the most part, this species is nocturnal.

Courtship and mating may occur anytime during the active season, but in Missouri it typically occurs in April through June, and August through October. Cottonmouths in Missouri usually give birth in August and September, but also into early October; a litter may contain 2–15 young, with an average of 6 or 7. Females in Missouri apparently give birth only every other year; when food is scarce, they may only give birth every three years.

A cottonmouth may live at least as long as 21 years.

People naturally fear venomous snakes, yet these animals also intrigue us and are deeply significant for human cultures all over the world. Learning about them helps us to coexist with these creatures that remain a vital part of the natural order.

There have been many common names associated with cottonmouths, causing some public confusion. The names cottonmouth, water moccasin, lowland moccasin, trapjaw, and gapper have been used for this species. Some Missourians use the common name cottonmouth for this species and water moccasin for the various nonvenomous watersnakes (Nerodia spp.). Often, any dark-colored snake found in or near an aquatic habitat is considered a venomous cottonmouth and either killed or unreasonably feared.

Snakes are an integral part of the wildlife community and play vital roles in their respective ecosystems. They are also protected by Missouri's Wildlife Code. While snakes can evoke irrational fear in those who encounter them, it is still unlawful to kill, harm, or harass them. 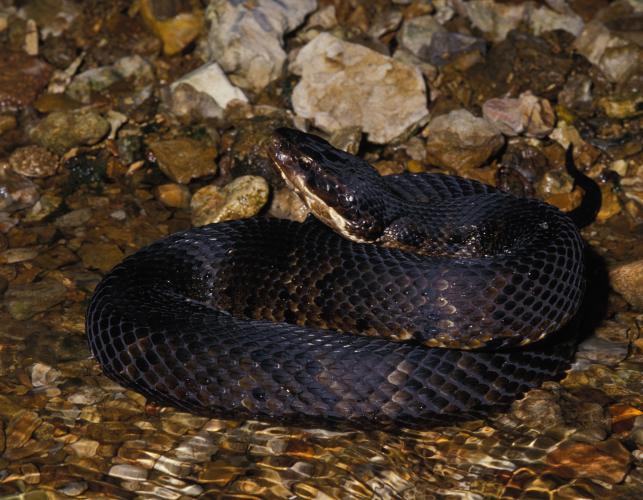 Caption
The cottonmouth is a semi-aquatic, venomous snake named for the cotton-white lining of its mouth, which it opens widely when alarmed.
Credit
Jim Rathert
Right to Use
1/8
Video file
Caption
Video of a western cottonmouth in the wild.
Credit
Missouri Outdoors
Right to Use
2/8
Image 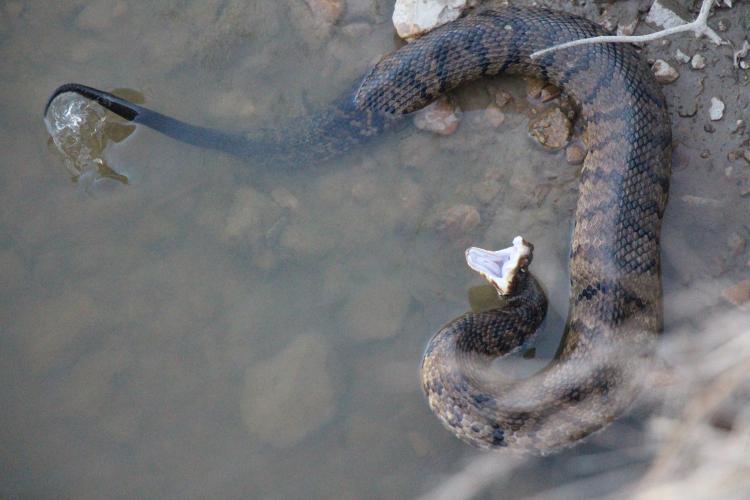 Credit
Submitted by Robert Bumpus
Right to Use
3/8
Image 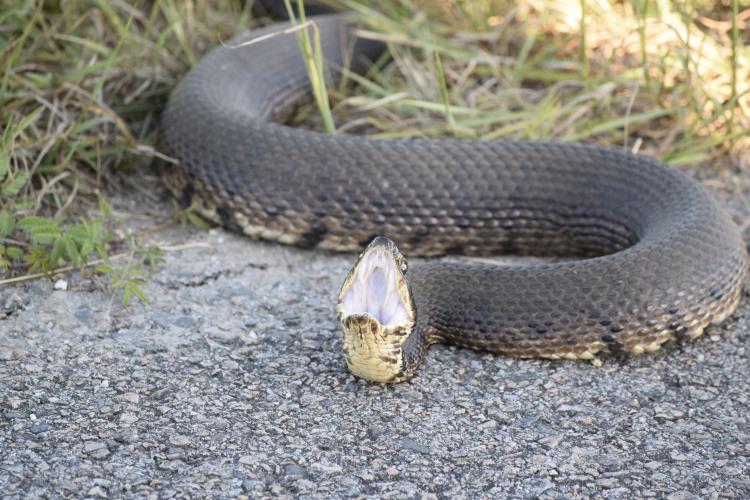 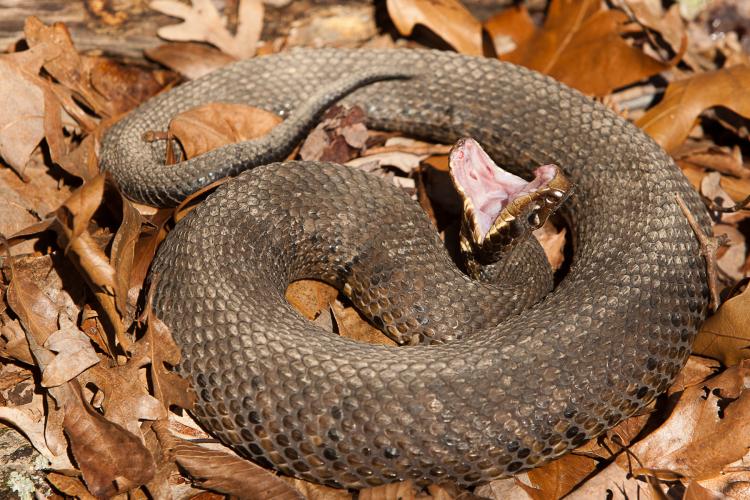 Caption
A cottonmouth gapes its mouth open in a defensive posture, showing the white lining that is the origin of the common name.
Credit
Noppadol Paothong
Right to Use
5/8
Image 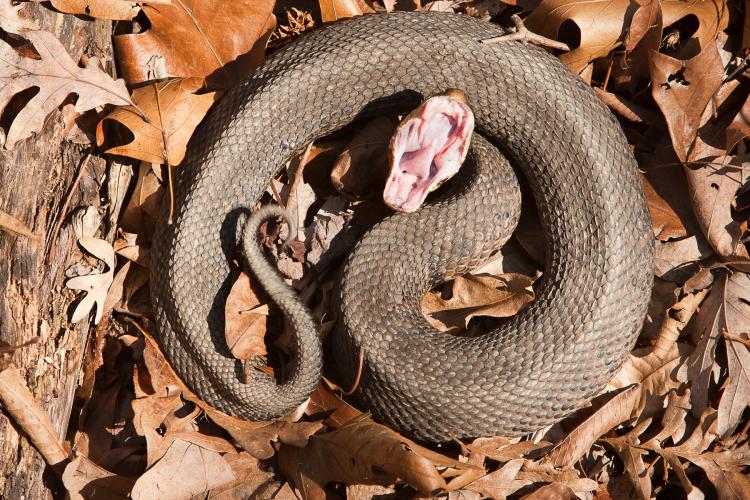 Caption
A Cottonmouth gapes its mouth in a defensive posture, showing the white lining that is the origin of the common name.
Credit
Noppadol Paothong
Right to Use
6/8
Image 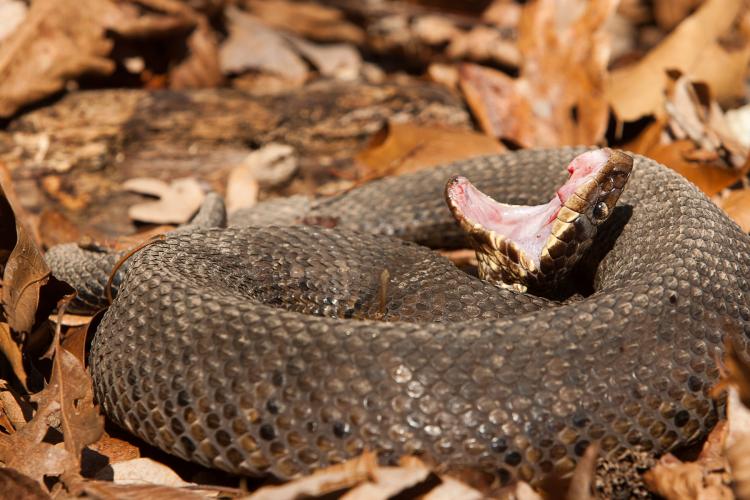 Caption
A cottonmouth gapes its mouth open in a defensive posture, showing the white lining that is the origin of the common name.
Credit
Noppadol Paothong
Right to Use
7/8
Image 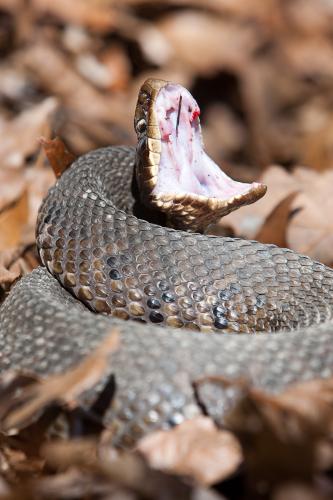 Caption
A cottonmouth gapes its mouth open in a defensive posture, showing the white lining that is the origin of the common name.
Credit
Noppadol Paothong
Right to Use
8/8
Image 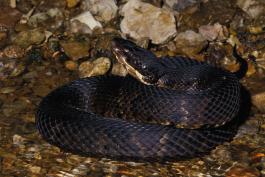 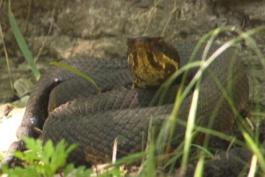 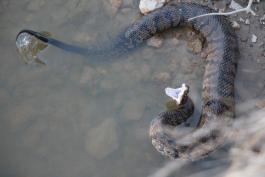 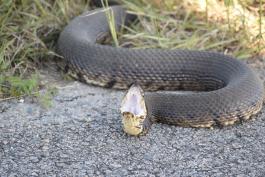 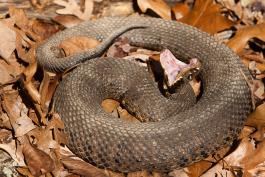 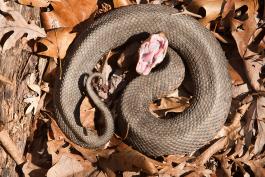 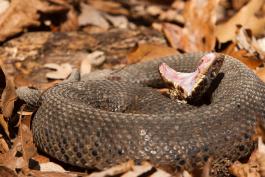 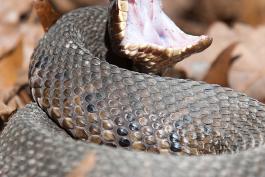 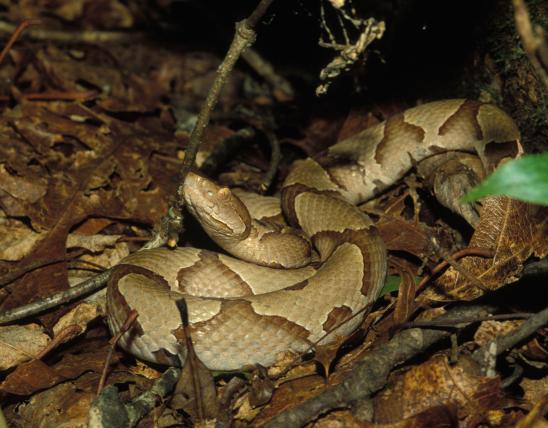 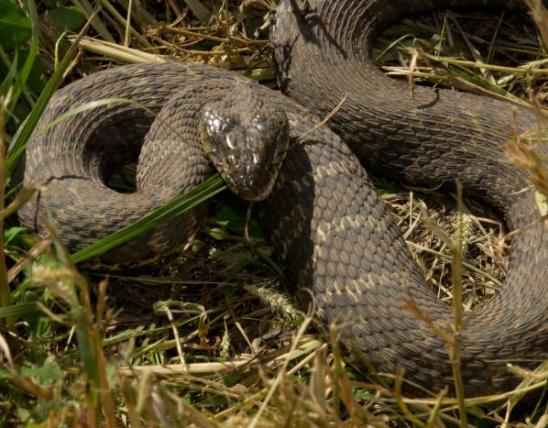 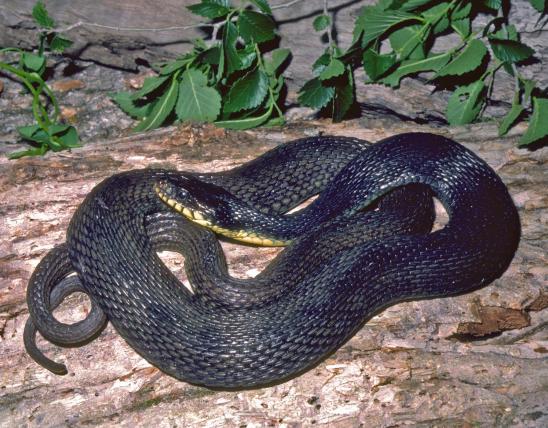 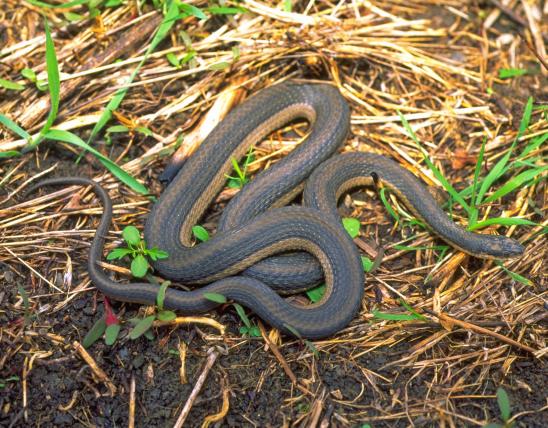 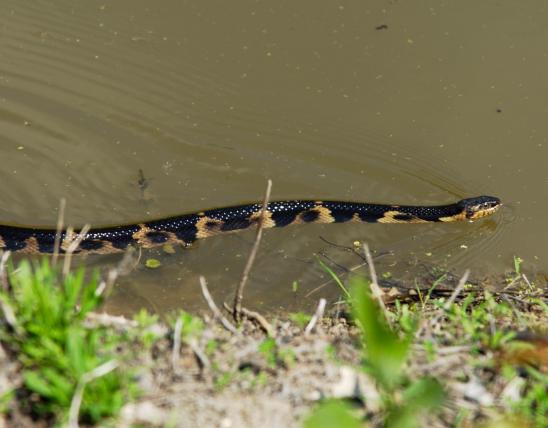 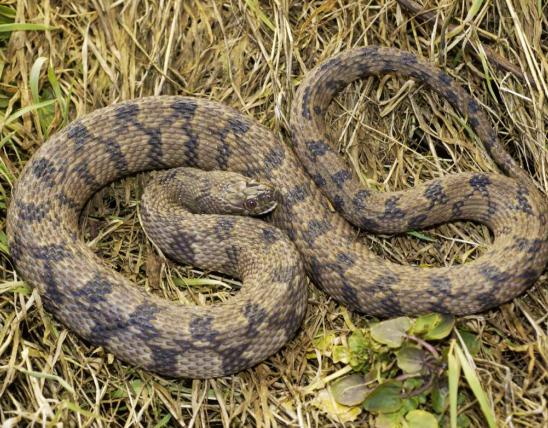 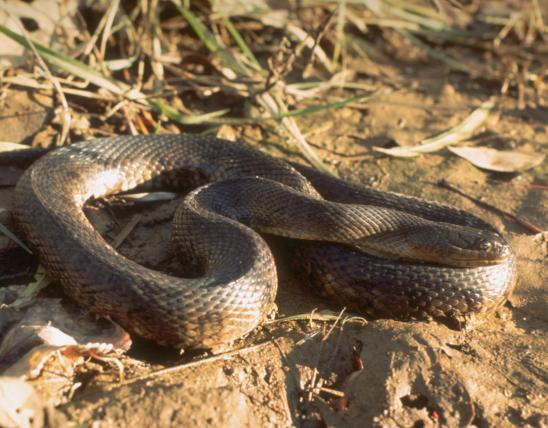 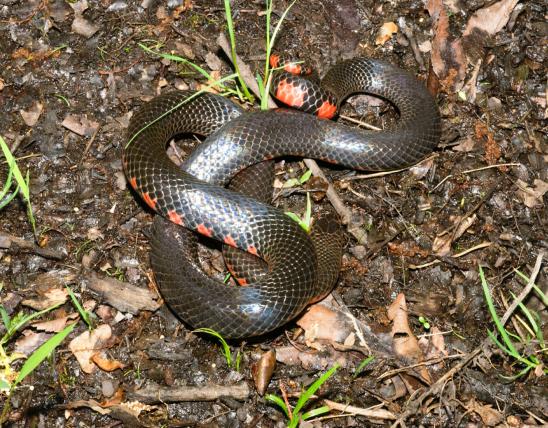 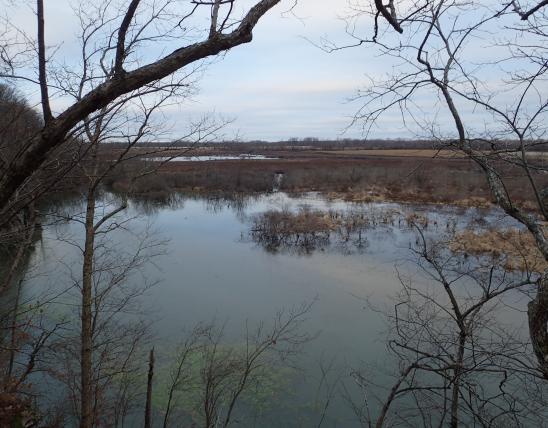 Cape LaCroix Bluffs Conservation Area
Cape LaCroix Bluffs CA is a 63.21 acre area situated in northern Scott County in close proximity to the Diversion Channel and the Southeast Missouri Port Authority.
About Reptiles and Amphibians in Missouri
Missouri’s herptiles comprise 43 amphibians and 75 reptiles. Amphibians, including salamanders, toads, and frogs, are vertebrate animals that spend at least part of their life cycle in water. They usually have moist skin, lack scales or claws, and are ectothermal (cold-blooded), so they do not produce their own body heat the way birds and mammals do. Reptiles, including turtles, lizards, and snakes, are also vertebrates, and most are ectothermal, but unlike amphibians, reptiles have dry skin with scales, the ones with legs have claws, and they do not have to live part of their lives in water.