The mottled sculpin occurs in the Osage, Gasconade, and Meramec systems, and in small tributaries to the Missouri and Mississippi rivers in the northern and eastern Ozarks. It has a relatively rounded (less deep and compressed than the similar Ozark and knobfin sculpins); the two sections of the dorsal fin are narrowly joined or are nearly separate; and spawning males are black, lacking blue coloration. The membranes of the second dorsal fin are not crossed by distinct wavy bands, and the pelvic fins are often crossed by faint brownish bands.

The mottled sculpin used to be considered more widespread in Missouri, but in 1985 the Ozark sculpin was split away from the mottled sculpin as a separate species, and in 2010, the knobfin sculpin was split away from the Ozark sculpin. Differences in DNA, body form, coloration, and stream distributions prompted the recognition of these as different species.

The mottled sculpin can be distinguished from other Missouri sculpins by the following:

Like our other sculpins, the overall color is variable, tending to match substrate color where found. The mottled sculpin has back and sides olive brown, reddish brown, or slate gray, with darker mottlings. There are usually 4 indistinct blackish saddle bars across the back and a blackish, 2-lobed vertical dark bar is present at the base of the tail fin. The belly and underside of the head are white with a faint to obvious dusting of brown specks. The spinous dorsal fin is splotched with dark brown or black; the other fins are faintly banded with brown lines (the pelvic fins are sometimes plain or with bands indistinct). Breeding males are darker, often almost black, with the spinous dorsal fin black with an orange or yellow band across the top margin.

Size
Adult length: commonly 2½–3½ inches; maximum about 4½ inches.
Where To Find
In Missouri, the mottled sculpin occurs only in the northern and eastern Ozark Highlands. Specifically, it occurs in the Meramec, Gasconade, and Osage river systems, including tributaries of the Lake of the Ozarks and Stockton Reservoir, and in smaller northern and eastern Ozark tributaries of the Mississippi and Missouri rivers. It also occurs in the Little Black River, which is a tributary of the Current River.

Sculpins, as a group, are bottom-dwelling fishes that lack a swim bladder. Their flattened bodies and enlarged pectoral fins are adaptations for maintaining a position in stream currents.

Where it occurs, the mottled sculpin is often the most abundant fish in its preferred habitat.

The mottled sculpin has a strong affinity for coldwater habitats, occurring almost exclusively in spring branches and streams that receive much of their flow from springs. It is found in riffles as well as pools, over bottom types ranging from silt to gravel and rock. It is most abundant about cover, such as coarse rock and thick growths of submergent vegetation.

Knowing the geography (which stream system your sculpin is from) is a good way help identify sculpins, since the otherwise-similar mottled, Ozark, and knobfin sculpins each have their own distribution patterns.

The mottled sculpin lives on the bottom, spending considerable time lying motionless in one spot and moving in short, quick dashes in a manner similar to darters. It is a rather sedentary fish, often restricting its activities throughout the year to about 150 feet of stream.

Sculpins have very large mouths and are able to swallow prey items (including other sculpins) nearly as large as themselves. The mottled sculpin may use its ability to blend in with its surroundings as an aid in ambushing its prey: larval aquatic insects, plus other aquatic invertebrates and an occasional small fish. This species is somewhat cannibalistic. Sculpins apparently do not feed to any great extent on eggs and young of trout, as some people used to charge.

The mottled sculpin has a large distribution across most of the northern United States and adjacent Canada. The Ozark populations are widely separate from the main body of the species range. Apparently, this northern species became established in the Ozarks during the much colder Pleistocene glacial epoch, and today it persists in Ozark coldwater streams.

Taxonomically, the mottled sculpin has proven a bit confusing. It was first described as a species in 1850, but since then, scientists have been splitting certain populations away as separate species. In 1985, scientists showed that a group of “mottled sculpins” in southern Missouri were a separate species and named it the Ozark sculpin (C. hypselurus). Then, in 2010, scientists split off a subset of “Ozark sculpins” and named it the knobfin sculpin (C. immaculatus), another new species. Older references, of course, will refer to all three species as “the mottled sculpin.”

Some researchers refer to the mottled sculpin as the “northern mottled sculpin,” and designate it as Cottus sp. cf. bairdii. This is a formal way of recognizing that this group of fish, which we currently call a “species,” may actually consist of populations that are different enough to be considered separate species.

Spawning apparently occurs from early March through the end of April. Males excavate nest cavities beneath rocks and tend the eggs and fry until they disperse. Females enter the nest cavity and turn upside down to attach the eggs to the ceiling of the nest. It is likely that more than one female may spawn in the same nest. In the Ozarks, this species nests from early or mid-March to the latter part of June. Males grow larger than females. Mottled sculpins do not mature until they are 2 or more years old.

In case you’re interested in history, there’s such a thing as “the history of biology.” The mottled sculpin’s species name, bairdii, bestowed in 1850 when it was first described to science, honors Spencer Fullerton Baird. Baird was a scientist who specialized in birds, fishes, reptiles, and amphibians, and he was the first commissioner of the U.S. Fish Commission. It’s hard to overstate his contributions to U.S. natural history. Just about any discussion of American natural history expeditions in the second half of the 1800s has to mention him. He was the first curator of the Smithsonian Institution and grew its natural history collections from thousands to millions of specimens. As a researcher, he published more than 1,000 works. At least 18 types of crustaceans, fishes, snakes, mammals, and birds were named to honor him. This sculpin was named by Baird’s student Charles Frédéric Girard, who at the time was working with him at the Smithsonian. We usually think of scientists as rather dispassionate people, but there’s a long tradition of scientists honoring their mentors by naming newly discovered species after them.

Sculpins make interesting aquarium pets because of their bizarre appearance and ability to change color to match their background. However, they require live foods. Also, they prefer lower temperatures than most aquarium fish: the maximum they can tolerate is about 70 F, and few aquarists are equipped with tank chillers. Nongame fishes may be collected for aquarium purposes by the holder of a fishing permit, using techniques and in numbers specified for bait collecting in the Wildlife Code of Missouri.

The mottled sculpin may aptly be referred to as the “chameleon of the fish world” because of its ability to modify its color to match its stream-bottom background. This ability helps the mottled sculpin escape detection by its enemies, and it may also help it to capture it prey by ambush.

Advanced nest guarding and parental care is a reminder that the eggs and young of these fish are quite vulnerable to predation. Adults avoid predators with camouflage coloration and motionless behavior. Being larger and able to swim quickly away helps, too!

There are several other species of plants and animals that live in Missouri’s coolest habitat pockets — species that otherwise don’t tend to live this far south in North America. Many of these are thought to be “glacial relicts” — isolated, surviving populations of what used to be a wider distribution during the times when glaciers covered the Upper Midwest, when the Ozarks were much cooler and moister than today. Some other Missouri glacial relicts include the northern brook lamprey, channel darter, four-toed salamander, wood frog, some species of stoneflies and caddisflies, marsh bellflower, northern bedstraw, harebell, northern white violet, snake-mouth orchid, green twayblade, and queen of the prairie. 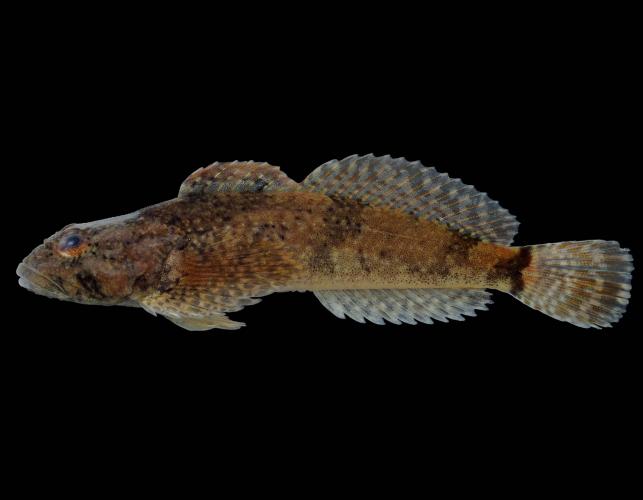 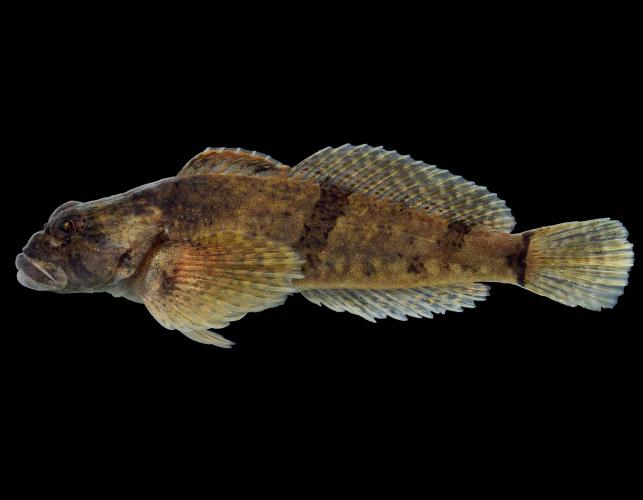 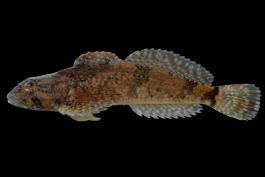 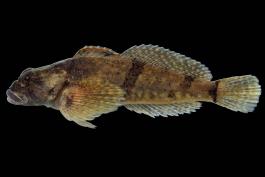 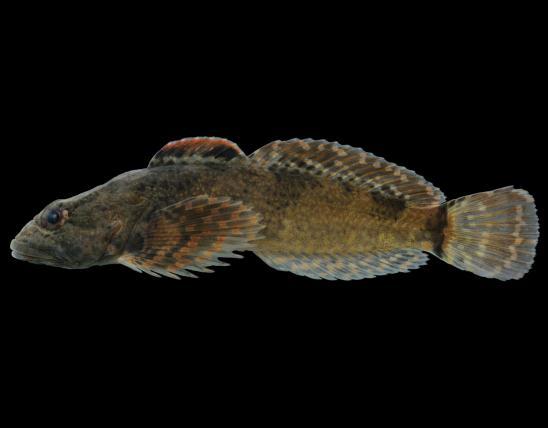 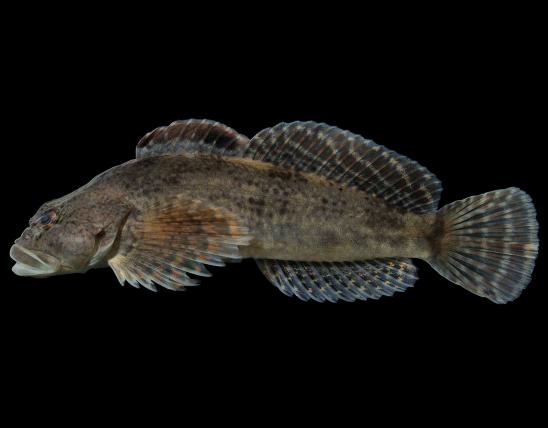 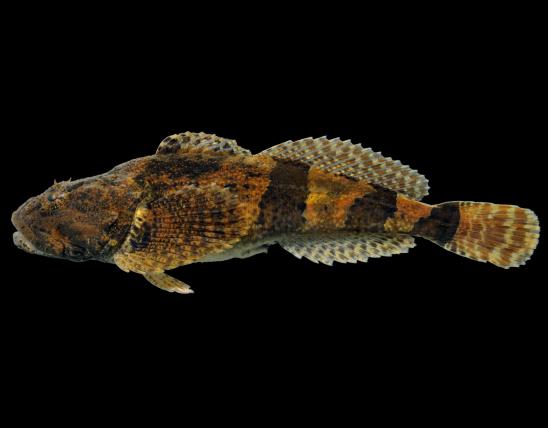 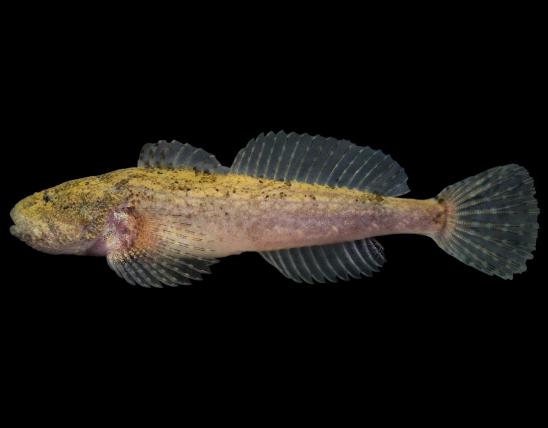 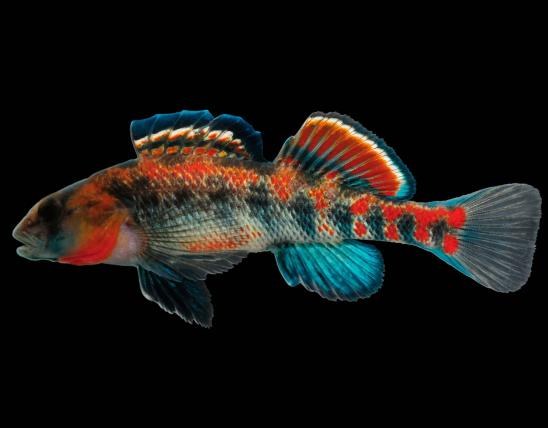 Ozark Madtom
About Fishes in Missouri
Missouri has more than 200 kinds of fish, more than are found in most neighboring states. Fishes live in water, breathe with gills, and have fins instead of legs. Most are covered with scales. Most fish in Missouri “look” like fish and could never be confused with anything else. True, lampreys and eels have snakelike bodies — but they also have fins and smooth, slimy skin, which snakes do not.