Fingernail clams, also called pill clams or pea clams, are members of a family of small to tiny freshwater clams that are common but rarely noticed. Like other clams, fingernail clams have two mirror-image shells that are hinged together, and the shells are generally rounded to triangular. In fingernail clams, the shells are thin and fragile, often translucent, the outsides typically shiny, fairly smooth, and gray, tan, yellowish, or whitish. Fine growth lines are often visible, but they are not strongly raised, ridged, or rough.

There are numerous species of fingernail clams in North America, in three genera:

Fingernail clams are found in a variety of aquatic habitats, usually in places with mucky or sandy substrates, and usually at or just under the bottom substrate. Some types of fingernail clams will also crawl around on submerged aquatic plants or other objects, using their muscular foot. Different species have different habitat preferences.

Some species of fingernail clams are specially adapted to live in vernal pools — temporary ponds, usually in woodlands, that fill with water in springtime, then dry up during summer. As the pool dries, the fingernail clams burrow down several inches into the soil, where it is moist enough for them to survive until the next spring.

Fingernail clams, like most other bivalve molluscs, are filter feeders that remove suspended organic materials from water: algae, tiny planktonic animals, plant and animal detritus, and so on. They have tubelike siphons that draw water and tiny, drifting food particles into the shell cavity. A pair of flaplike, mucous-covered gills collects the goodies and channels them to the animal’s mouth, situated at one part of the gill. Waste products are expelled from the shell cavity via excurrent water flow.

Fingernail clams, being very small for clams, produce young that are surprisingly large considering their adult size. Biologists point out that there are tradeoffs between producing rather large, well-developed young in relatively small numbers, versus tiny, undeveloped young in masses:

In the animal kingdom, both strategies can be effective.

Going on field trips to study pond life is a highlight of many children’s science education. In addition to a fun day out in nature, it also teaches kids how stream ecologists can gauge a stream’s health by what kinds of invertebrates are present. Kids use dip nets and shallow white bowls to fish out, sort through, and identify the many strange invertebrates that live in the shallow water of a pond edge. Fingernail clams are often one of the discoveries. What a surprise to find tiny clams living in Missouri!

Many people are fascinated by dinosaurs. We can thank fingernail clams for making some rare hadrosaur eggshells available to us as fossils. Usually, these egg fragments didn’t last long enough to become fossilized because mildly acidic conditions would dissolve the shells’ calcium before fossilization could take place. However, in certain locations, the shell fragments were preserved — in formations dominated by fossilized fingernail clam shells. The many calcium-rich clam shells buffered the water, preventing it from becoming acidic, and preventing the dissolution of the egg fragments.

Fingernail clams are filter feeders that remove suspended organic materials from water, so they tend to clarify the water. It also means that they are an early step in aquatic food webs, since they consume tiny suspended algae and other foods and convert it to the form of their bodies. Then, they may be eaten by fishes, birds, and mammals that aren’t bothered by their small shells. Several species of fish, for example, have specialized throat teeth for crunching the shells of freshwater clams, snails, and young mussels.

The vernal pools that some fingernail clams live in are famous for being important habitat for amphibians. In spring, salamanders, newts, frogs, and toads travel to these fishless ponds to mate and lay eggs. Because these ponds lack fish (which would eat them), the eggs, tadpoles, and larval salamanders can grow to maturity in relative safety. The fingernail clams and other invertebrates in these pools are important parts of these fascinating, temporarily aquatic ecosystems.

Apparently, fingernail clams can move from one isolated vernal pool to another by clamping on to a finger or toe of a salamander, frog, or other animal. Remember that fingernail clams can fertilize their own eggs, so only one individual can start a population. Biologists have witnessed this hitchhiking phenomenon in the vernal pools of northern states. This seems to be the way these clams came to inhabit so many vernal pools long ago.

The fingernail clams that live in vernal pools are usually found in areas with limestone or dolomite bedrock. Why? Because without limestone or dolomite rocks to buffer (raise the pH of) the soil and water, the decaying leaves and other organic materials on the floor of the woods would tend to make the environment somewhat acidic — and an acidic environment would either damage the clams’ fragile shells or prevent them from forming at all. Also, clams need calcium in the environment to build their shells, and limestone and dolomite provide it. 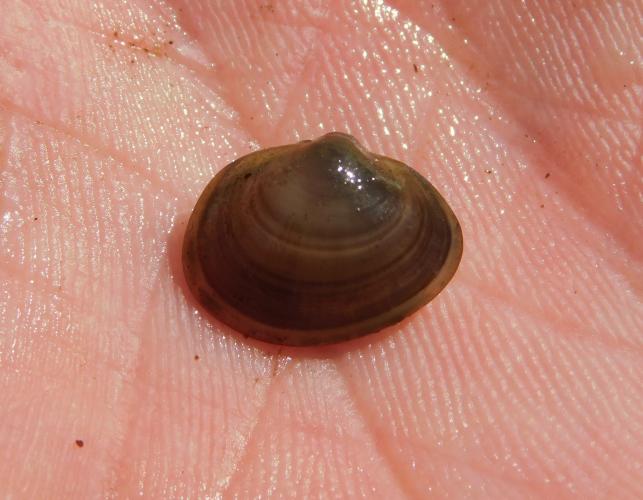 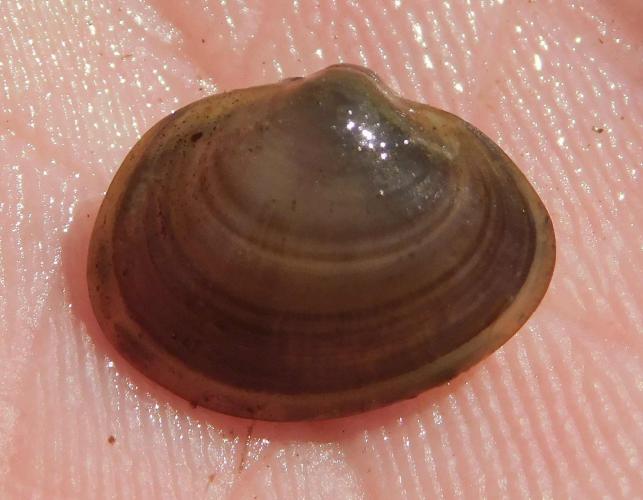 Caption
Fingernail clams, also called pill clams or pea clams, are members of a family of small to tiny freshwater clams that are common but rarely noticed.
Credit
Julianna Schroeder
Right to Use
2/5
Image 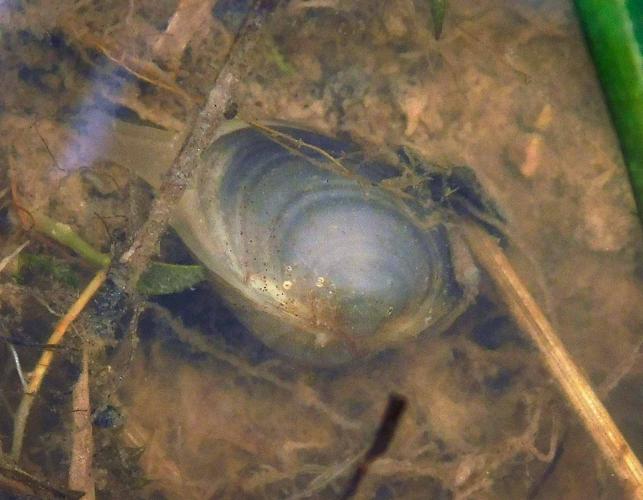 Caption
Fingernail clams occur in a variety of aquatic habitats, usually in places with mucky or sandy substrates, and usually at or just under the bottom substrate.
Credit
Julianna Schroeder
Right to Use
3/5
Image 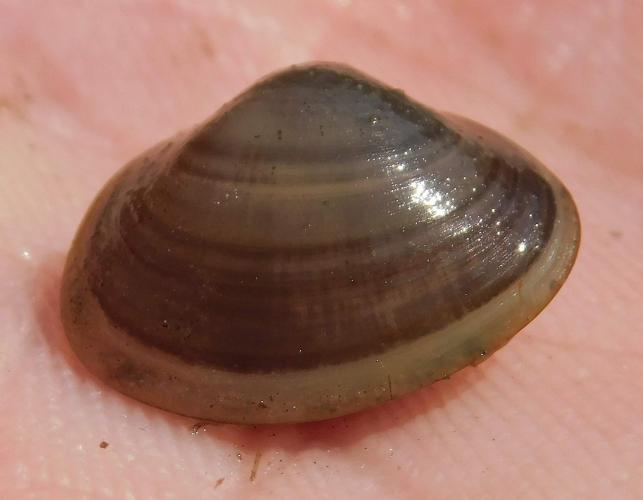 Caption
Shells of fingernail clams have only slightly raised ridges showing the growth pattern — not a thickened shell with prominent raised ridges.
Credit
Julianna Schroeder
Right to Use
4/5
Image 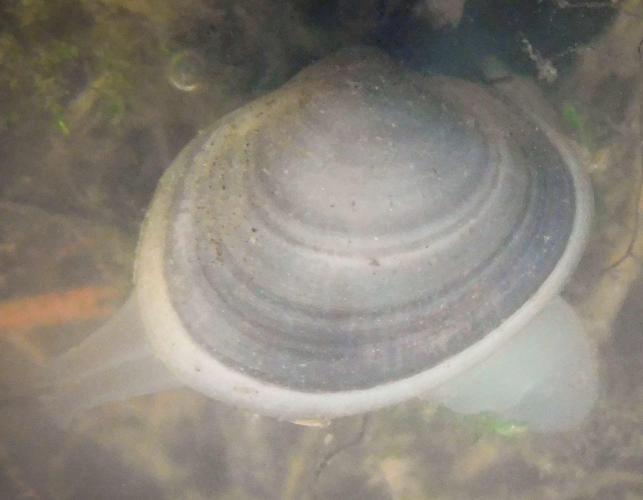 Caption
When a fingernail clam relaxes, its shells open slightly to allow the two siphons (left) and foot (right) to protrude.
Credit
Julianna Schroeder
Right to Use
5/5
Image 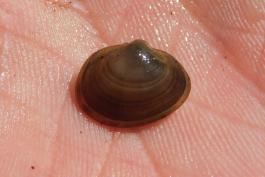 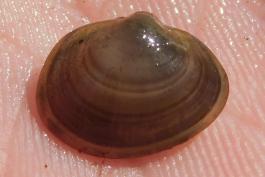 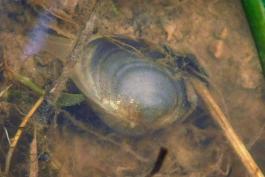 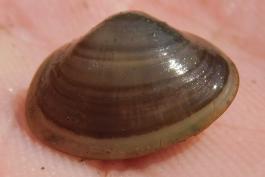 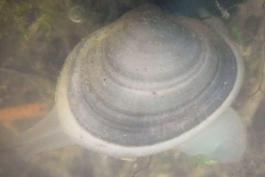 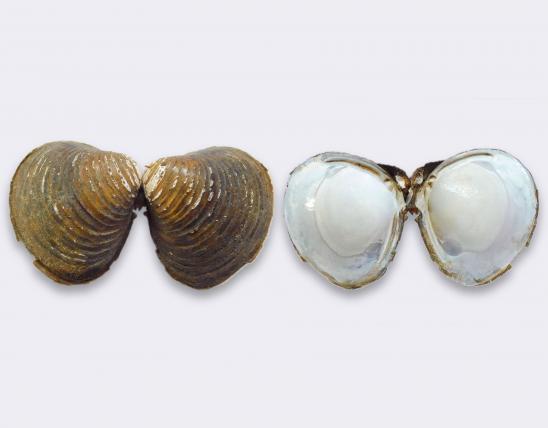 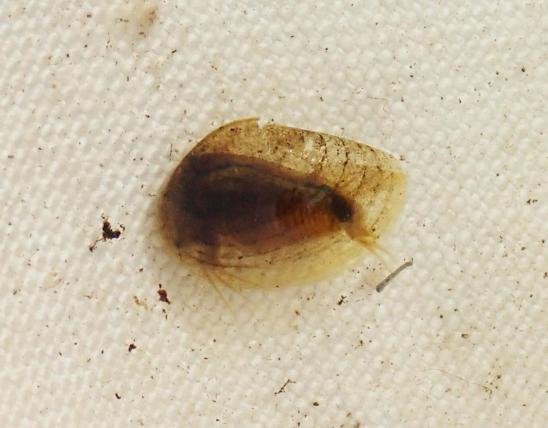 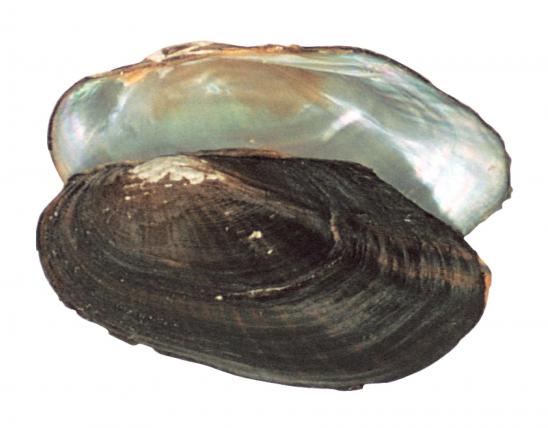 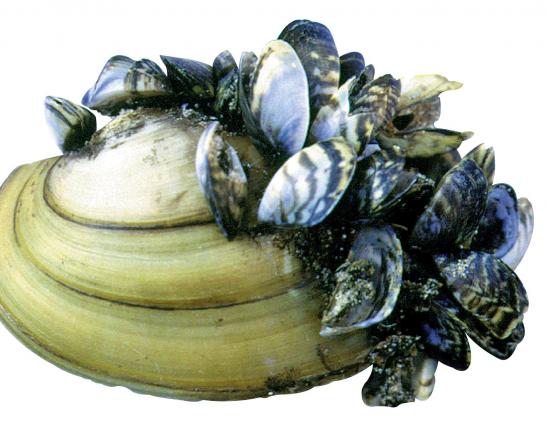 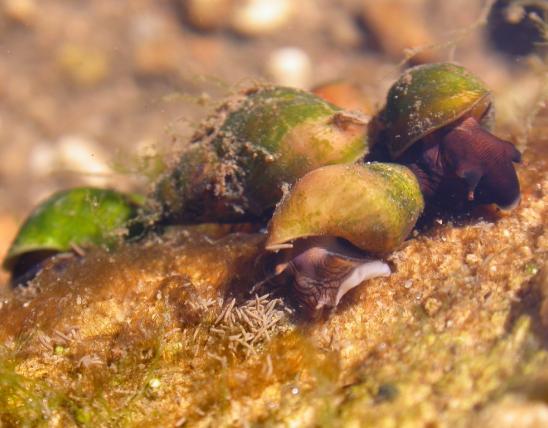 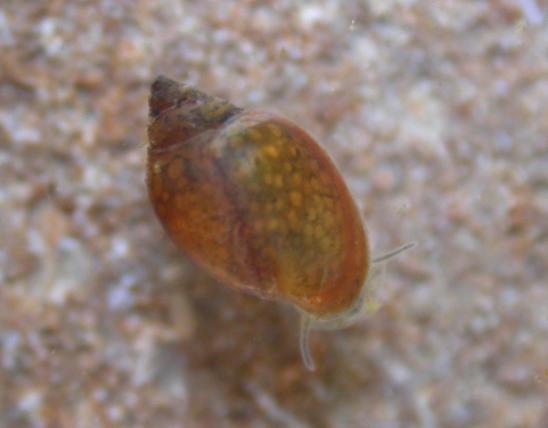 Lunged Aquatic Snails (Pulmonate Pond Snails)
About Aquatic Invertebrates in Missouri
Missouri's streams, lakes, and other aquatic habitats hold thousands of kinds of invertebrates — worms, freshwater mussels, snails, crayfish, insects, and other animals without backbones. These creatures are vital links in the aquatic food chain, and their presence and numbers tell us a lot about water quality.